Why are all of Mr. Shirley's gifts the same?

In Christmas Vacation, Clark is bringing his boss, Mr. Shirley a Christmas gift. Mr. Shirley is annoyed at being interrupted and tells Clark to put it with the others.

The other gifts are on a table behind Clark. All of the gifts are the same exact size and shape as is the one that Clark has. 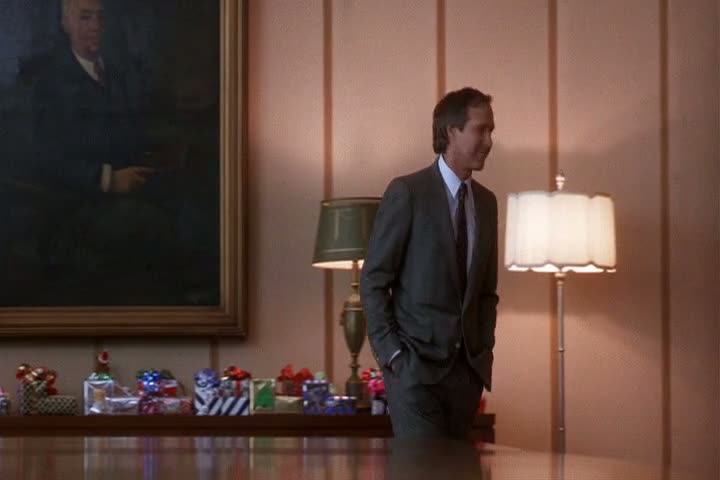 Is there any reason why the gifts are the same? Is this ever explained?

It draws attention to Mr. Shirley's value of each of his employee's offerings.

By making it appear to be the same in shape, and by placing it among several that have been placed before him, we see that several of his employees have had the same idea: offer a seemingly gracious gift in hopes of working him over to return a bonus in exchange.

As Mr. Shirley advises to put it with the other ones, we understand that Clark's offer is held in the same esteem as everyone that has come before him. The Jelly of the Month Club bonus solidifies Shirley's sentiment.

Not the answer you're looking for? Browse other questions tagged plot-explanation props christmas-vacation .

1
What gift does Clarke give his boss, Mr. Shirley in Nation Lampoons Christmas Vacation?

5
How does Simon remember his destiny?
5
Why aren't all the werewolves turning at the same time?
8
Why did Django come to Candieland?
3
How does Lydia "escape" the dinner scene?
9
Who makes the arrows in TV show Arrow?
6
What did the gifts signify?
7
Why do all of the ATM cards have the same PIN?
13
Why are all people not affected in the same fashion?