Movie about earth being frozen, protagonist saves the day with sattelite [closed]

I think I saw the second half of this movie a couple of years ago (2010 or earlier) when it aired on TV on a Belgian channel. The movie was in color and couldn't have been that old.

What I think happened in the first part

Scenes I remember very clearly (not sure about the order)

I'm not sure if there was an antagonist or what actually caused the global frost. 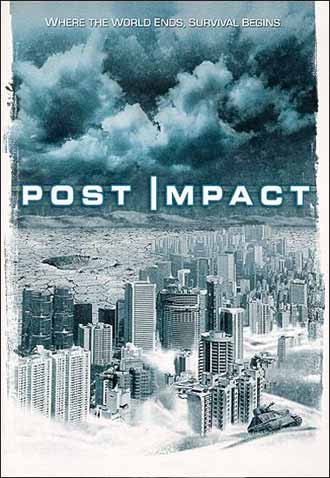 In 2010, during a party at the US embassy in Berlin, Germany, scientist Gregor Starndorf is told that the comet he discovered, designated Bay-Leder 7, is headed towards Earth. It is large enough to cause an extinction level event and is only days away. He develops a satellite weapon called SolStar-2, which is moderately successful against the comet: the microwave beam cut Bay-Leder 7 in two, but the smaller part impacts in western Russia. The head of US embassy security, Captain Tom Parker picks up his family so they can be evacuated. However, his superior, Colonel Waters, forces Parker to leave them behind, watching helplessly as the aircraft takes off. News reports depict the after effects of the impact.

Three years later, the situation has not improved. Due to the debris thrown into the atmosphere, all of Europe's population was evacuated to Africa, where a new ruling body, the New United Northern States (NUNS), has been established. Oil prices also skyrocketed, enabling the Middle East to establish a firm grip on the world economy. A NUNS technician finds that SolStar-2 is still active. But the satellite can only be controlled from the command center below the Reichstag. The problem is, since the comet impact, Germany is covered in huge layers of ice. An aircraft, carrying personnel sent to investigate, explodes while flying over the area. Evidence points to SolStar-2 in the attack. NUNS President Miranda Harrison recruits Parker to lead an expedition—including ex-SAS Sarah Henley and Anna Starndorf, Gregor Starndorf's daughter, to find out who controls the satellite and destroy it. Although Parker knows the mission is led by Colonel Waters, he asks to join, secretly hoping that his family is somehow alive...

Parker and Anna continue the search for his family and find his home. Inside he discovers his wife's final message to him beside their frozen bodies. Back outside, they watch the thick, permanent clouds over Germany dissipate, revealing the warming sun once again.

The parts about the sun not reaching the surface, the whole planet frozen, and saving the day with a control tower and satellite, all sound like The Colony with Lawrence Fishburn.

Although The Colony is from 2013 and the main character doesn't have a wife or daughter.