In the new Star Wars movie Star Wars: The Last Jedi Kylo and Rey together defeat Snoke; after that fight, Kylo is telling Rey that together they can rule a whole new world order together. And then Kylo tells Rey that her parents were no one special, but she is to him.

So my question is: are Kylo and Rey in love even though they're on opposing sides?

Kylo clearly has strong feelings for Rey, and those feelings include some form of "attraction". In his distorted, dark-side state, this could be a manifestation of love, but it's also possible that it's just jealousy, or wanting to control her powers.

He is perfectly willing to fight (and try to kill her), but he definitely has moments where he changes his mind.

He chose not to kill her in Snoke's throne room, and then offered her a place by his side. (notice that he doesn't necessarily ask her to turn to the dark side, or renounce the light side, just to allow the "old things" like the Resistance and the Jedi to die).

Kylo's feelings are perhaps closer to obsession than love, similar to Darth Sidious, and how he felt about Anakin Skywalker. He had many apprentices over the years, but seemed to be "waiting" for Anakin, having selected him as "the one" that would eventually be his true lifelong apprentice. This "obsession" even led Darth Sidious to personally travel to Mustafar in order to save Vader's life.

Finally, Rey does not seem to have similar feelings for Kylo. Although she wants to turn him back to the light side, her motivation is wanting to help the Resistance, not necessarily saving Kylo's soul.

I think there is definitely an attraction and an intentional intertwined "Star Crossed" destiny with this pair, and The Last Jedi had some sexual subtext (Shirtless Ren, Rey touches his thigh), but The Last Jedi leaves viewers still somewhat ambiguous about Kylo Ren's overall motives or philosophy, not to mention it feels like there could be a love square brewing between Kylo, Rey, Finn, and Rose.

(Also Note: Star Wars Novel, LOST STARS and it's love story between characters who end up on opposite sides of the conflict).

However, it was reported that J.J. Abrams is pitching his general ideas for episode IX to Disney head Bob Iger. Allegedly the code name for the film is currently, "Black Diamond"

Black Diamond Lore
As a real, natural diamond, these stones share all of the same meanings and symbolism as traditional white diamonds, such as strength, wisdom, eternity, and everlasting love. Italians in medieval times believed that black diamonds wielded the power to restore the relationship of a married couple, and the Black Orlov diamond had a reputation for bestowing happiness and good fortune on anyone who touched it. source

Black Diamond Metaphysical Properties As kings of all crystals, black diamond possesses deep metaphysical use and purpose. It is often used as tool to open doors to the spiritual world. That explains why a lot of healers and cleansers use this stone at their work. It allows for spiritual communication as well which is sometimes needed by those who look for truth. source

Given the way The Last Jedi ended ('spark of hope'), it seems likely that episode IX is going to be a hopeful tale by the story's end.

In addition this story is still clearly about Rey stepping into the Skywalker Family Saga and therefor it has to have conflict resolution of some sort between her and Kylo Ren, despite that I think we still don't fully understand what the nature of their roles are and/or are in relation to each other.

But if we read into the symbolism of the Black Diamond, then it seems likely that this is a story about compassion, healing, and everlasting love and perhaps with some literal metaphysical advancement on [kyber] cyrstals (ie Snoke's Ring), Force Ghosts, the afterlife, and/or immortality and that Rey is probably going to try and save Ren, or Ren may try to save Rey, or they may face something bigger than themselves that forces them to work together.

There's also some information from The Last Jedi Novelization author Jason Fry that may also support some kind of love story...

"Lots of fans assess it as a potential romance, and maybe that’s ultimately what it will be. (I have NO idea.) Certainly the famous scene in the hut verges on that.

But we fall back on romance because it’s the best analogue we have. Rey and Kylo’s relationship is more intimate than that. They’ve literally been in each other’s minds. Rey’s seen his deepest fears; he’s seen the past she’s buried. None of us have had that experience.

My point is romance may not be the endpoint of that. (Though it may be.) The analogue may be misleading, because it’s an analogue. Their connection is deeper and stranger and far more complicated. I think TFA/TLJ covers those complications wonderfully, with Ep IX promising more."

If we take what Mr. Fry is saying here to heart, he may be suggesting that "romance" is the closest thing we have to describe their feelings for each other, but that he feels whatever the end results of this relationship really are, what they have runs deeper than romance, being extremely intimate on a profound psychic and/or emotional level.

I think he's saying, there's romance, but then there is also love, but love tends to either bring people together, or rip them painfully apart and therefor it's hard to say where the chips are going to fall, given everything we do not know about episode IX.

This link from Star Wars' own official website, also provides some insights from The Last Jedi Novelization, making it more essential to see where things could be headed, including suggestions of a Kylo Ren/Ben Solo redemption arc.

UPDATE: The Rise of Skywalker

A Force dyad, also known as a dyad in the Force, was a rare type of Force-bond that paired two Force-sensitive beings and made them one in the Force. The power of a dyad was as strong as life itself, and the individuals who formed a dyad shared a connection that spanned across space and time. 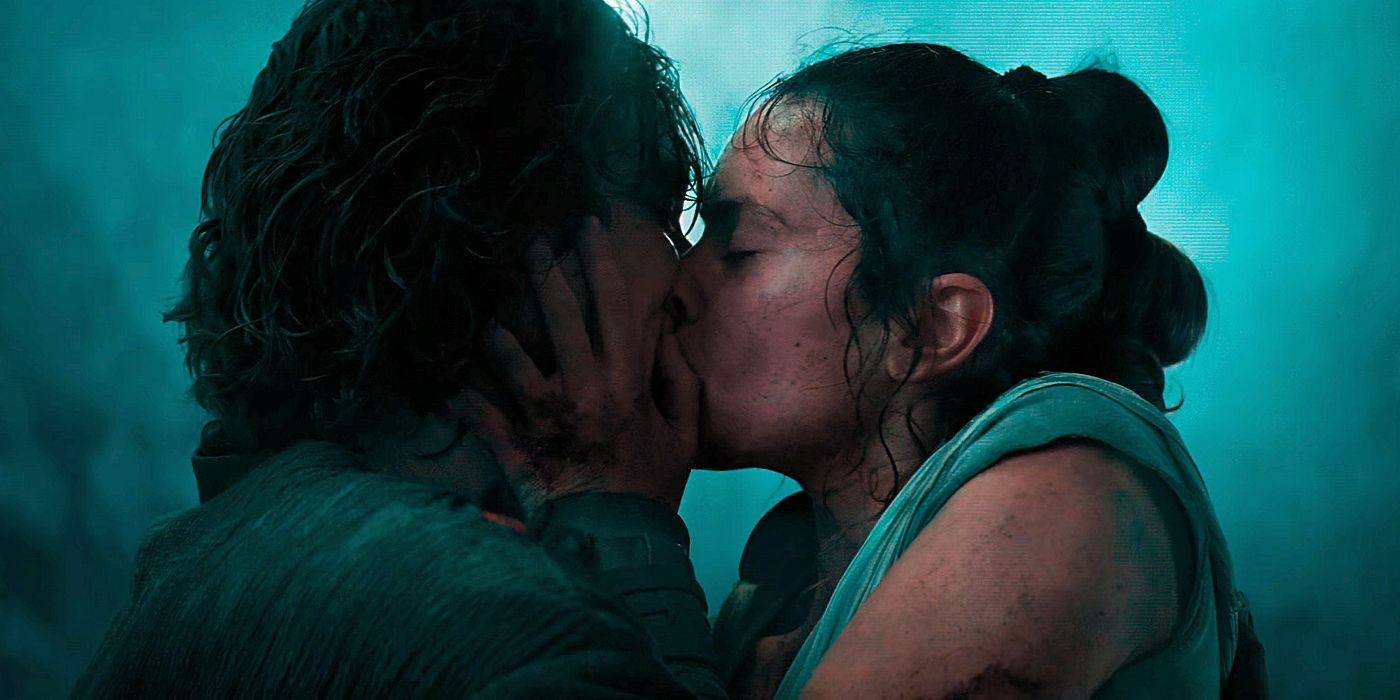 It's not that there isn't an "almost" Gothic romance here (which also beautifully juxtaposes the Frankenstein-esque story of Darth Vader), but given the idea that they are "one" with the force, could be interpreted as one soul divided into two beings, and thus there is a mutual attraction and perhaps a need to "breakdown" and become a "complete" identity and this then also becomes a story about self love and acceptance, which is especially apt for Rey's overall narrative.

Star Wars continues to exist in a reality with a metaphysical construct of The Force, and so far, the Force not only seems to connect everything together, but it seems to have deterministic qualities (prophecies, no alternate timelines) and/or potential cycle cosmology constructs, considering how Rey is rechristened and born anew, Rey Skywalker, breaking the Skywalker ascendants tragic cycle catalyzed by Darth Sidious.

But even looking to Star Wars: The Clone Wars, we have The Mortis Arc, featuring the Celestial Force Sensitive beings simply called, The Ones. In similar fashion they all end up dying at the expense of The Son attempting to escape and Anakin refusing to take on a role they believe he should. Ahsoka Tano too is nearly lost, until The Daughter gives the last of her life force to save her and bring her back. Ahsoka's story is ongoing and the full affects and/or meaning behind her connection to The Daughter has yet to be realized.

"Bring back the balance Rey, as I did." -Anakin Skywalker, The Rise of Skywalker.

But ultimately these are events that bring cycles of "balance" back to force for a time...and for Rey, it's really the beginning of new journey with newfound identity and mantle to uphold.

I don't think so.

- They don't really know each other.

Have they ever had a conversation (in person)?

- Almost their entire time together has been fighting.

In episode 7, The Force Awakens, they have a lightsaber duel and even most of episode 8, The Last Jedi, Rey hates Kylo Ren and again tries to kill him with a blaster.

- He is incredibly manipulative .

Ren manipulates Rey through her (lack of) memory of her parents.

At one point Ren even calls out Rey's "daddy issues", first with Han, then with Luke.

When Ren reaches out to Rey, he doesn't say "Let's be together", he's says something about "ruling together". He doesn't like/want her for who she is.

- They're not complimentary to each other.

Rey has called Ren "a monster" on multiple occasions.

At one point Ren is shirtless and Rey makes how she feels clear when he asks him to put on a towel.

I think the best explanation for Ren's offer of ruling the galaxy together is that Kylo Ren is manipulating Rey because he can see that she is powerful with the force:

Remember, their duel in TFA she nearly kills him. That was her first fight, knowing very little about the Force. At that same point, Ren had studied the Force for years and killed many in battle. A padawan beating a Sith Lord in battle!

Trying to kill each other + Manipulation + Insults != Love

With that said, this is Star Wars and no one can say what will happen in the next episode.

Kylo's only ambition is ruling the entire galaxy and making Dark Side great again . Which his grand father failed to do . He will do anything to make it possible if possible join hands with even his enemies like Rey . That is not love it is oppurtunity .

Rey on other hand is caring about Kylo because she wants Leia and Hans son to be good . She has feelings for Finn , which is shown many times in Movie . I am not sure if this is love . But she has a thing for him .

8
How does this apparition happen?
3
Why didn't the First Order track Leia?
26
Who snuck the books on board the Millennium Falcon?
45
Who is the titular "Last Jedi"?
2
Was Luke referring to Kylo Ren or somebody else?
4
Were the Knights of Ren always working for THIS character?
3
Was Rian Johnson told the answers to The Force Awakens’ mysteries?