I watched in France a kung-fu movie in the early 80's (I believe) of which I do not remember much except one specific scene. The movie was part of the trend "a more or less random guy is taught kung-fu and becomes a better person" (the 1984 Karate Kid kind, and similar ones).

The scene I remember from this one is that the hero (a grown man, I do not remember if he was Asian or American) learns kung-fu (or a derivative) in an Asian monastery and the final test consists of him holding a red hot bowl (about 80 cm wide) in (or rather on) his forearms (not hands). He must transport the bowl over a few meters, during that time some signs on the bowl are burned into his forearms (I think he chooses the ones he wants when grabbing the bowl).

He can then open the exit door of the monastery and falls in the snow in pain from the burns.

This is in the first part of the movie, I think the real adventure starts from there.

I am aware that this is just one scene from a movies like there were many, but it was quite significant (it stayed in my memory for all these years) and the fact that the movie was broadcasted on French TV suggests that it must have been at least quite well known.

The adventures of a Shaolin Monk as he wanders the American West armed only with his skill in Kung Fu. 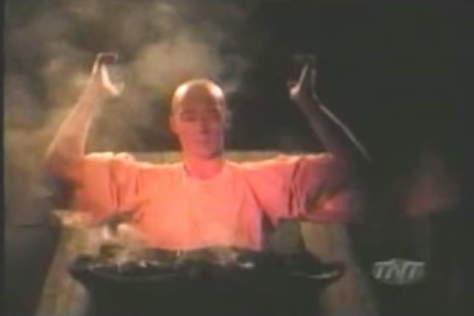 Kung Fu is an American action-adventure martial arts western drama television series starring David Carradine. The series follows the adventures of Kwai Chang Caine (portrayed by David Carradine as an adult, Keith Carradine as a teenager, and Radames Pera as a young boy), a Shaolin monk who travels through the American Old West, armed only with his spiritual training and his skill in martial arts, as he seeks Danny Caine, his half-brother

There was, as I recall, an extended pilot which you may have mistaken for a movie.

The series aired on ABC from October 1972 to April 1975 for a total of 63 episodes. Kung Fu was preceded by a full-length (90 minutes, with commercial breaks) feature television pilot, an ABC Movie of the Week, which was broadcast on February 22, 1972. The series became one of the most popular television programs of the early 1970s, receiving widespread critical acclaim and commercial success upon its release

Not the answer you're looking for? Browse other questions tagged identify-this-movie action martial-arts .