In An American Werewolf in London when we meet Sergeant McManus, his tie was not up to the mark: 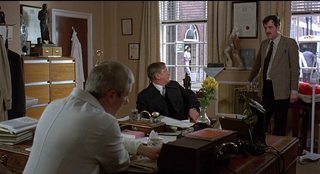 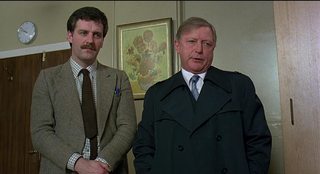 When next time he appeared his tie was better the thinner leaf of tie got reduced in length: 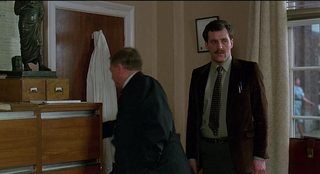 But in the last scene it was perfect: 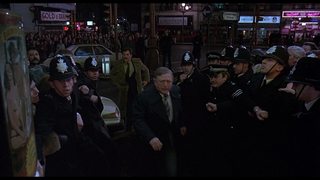 Is there any significance of Sergeant McManus's tie journey from being uneven to perfect?

When we are first introduced to Sergeant McManus, he appears to be somewhat of a bumbling fool who isn't allowed to speak for himself and who is constantly contradicted by his commanding officer.

Sergeant McManus is scolded by Lieutenant Villiers when he accepts the offer of tea from Dr. Hirsch. McManus then proceeds to knock over medical supplies in the Doctor's office and clumsily attempts to put them back into order while both Dr. Hirsch and Lieutenant Villiers look at him like he is a bumbling idiot.

During the questioning of David, Sergeant McManus is open to listening and believing David's story while Lieutenant Villiers is quick to dismiss the story and dismisses Sergeant McManus's opinion on the matter as well.

It's also important to mention that John Landis was actually in the process of writing a sequel and Sergeant McManus was written in as a reliable source to the happenings of the attacks and the aftermath:

She tracks down Dr Hirsch, who tells her that Alex (Jenny Agutter) now lives in Paris because she was so traumatized by what happened ... It's then when she speaks to Sgt McManus, the cop from the first movie who didn't die, that she finds out that Jenny is still in London.

The way that Sergeant McManus is dressed does have some significance in the film. His attire evolves with him as a police officer and his character being taken seriously.

So, Sergeant McManus was introduced to us as a bumbling fool, but leaves us as a credible and well respected police officer.

Not the answer you're looking for? Browse other questions tagged character analysis an-american-werewolf-in-london .