After steelersquirrel's comment I got to know that See You Next Wednesday is a recurring gag in John Landis' films:

But this blog present very detailed analysis of the significance of the film:

The trademark trivia often mentioned in Landis directed films, the inclusion in some form of the phrase “See you next Wednesday” is a reference to a line in the Stanley Kubrick film ‘2001: A Space Odyssey’ where astronaut Frank Poole watches a video sent to him by his wife and father on the occasion of his birthday. At the end of the video his wife says, “See you next Wednesday!” an obvious reference to their next available time to transmit a message to the distant space craft bound for Jupiter, though since Frank is killed within the next day or two by HAL, it is perhaps meant as an ironic trademark since it seems to occur in Landis films when characters are in great danger.

Same happen in An American Werewolf in London too, where David meet his tragic fate just after seeing See You Next Wednesday. Even before that a character died in subway when he pass by the poster of the film: 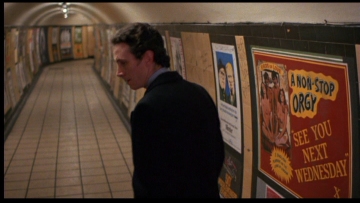 Not the answer you're looking for? Browse other questions tagged analysis directors adult-movies an-american-werewolf-in-london .