How did the gallery owners mistake the watercolored fake as a Pissaro?

In the movie The Thomas Crown Affair (1999), at the end we see that Mr Crown has actually returned the Monet:San Giorgio Maggiore at Dusk he stole from the gallery within a few days of the theft. The painting was hidden as a water color forging of one of Camille Pissaro's paintings, which he gave as a loan untill they found the Monet. 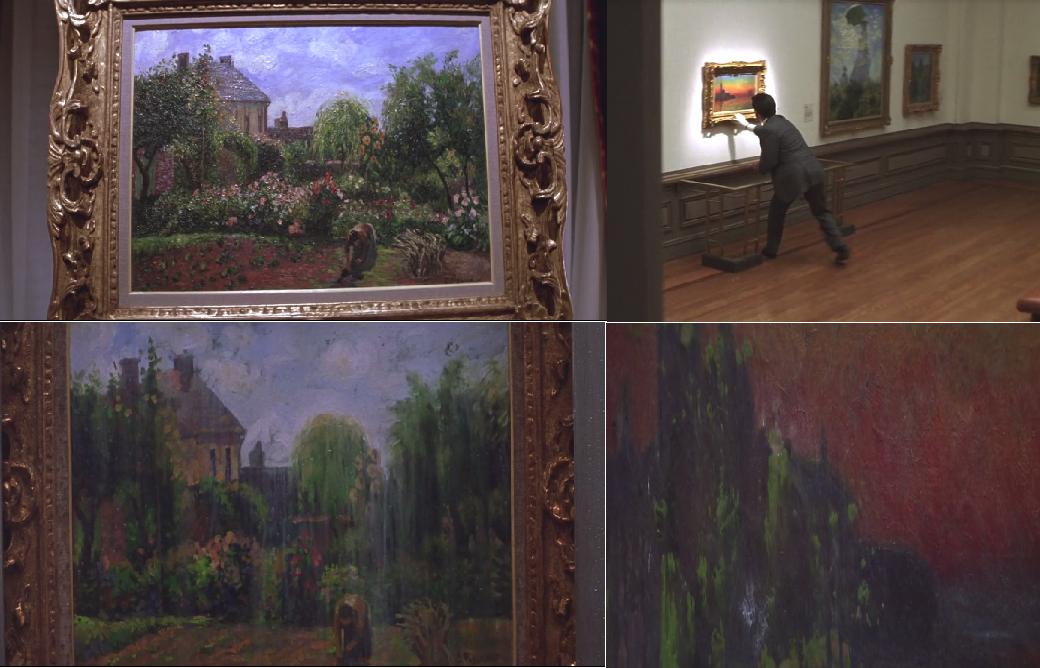 My Question: How was it possible that the gallery owners and the painting experts weren't able to see that it was a fake (given their knowledge and experience in such fields and the position they held in this plot)? Knowing most of Pissaro's paintings are based on oil.Source

For the sake of the plot my guess would be: They (the gallery owners) were so overjoyed that Mr Crown gave a painting to the gallery as a loan from his private collection, that they presumed checking it would demean the favor and might seem harsh too. Please do fill me in if I am missing something here.

I have BFA in painting and have worked professionally (commercially) with paintings executed between the 16th and early 20th centuries for about 25 years.

It is not plausible. Even under glass, it would be impossible for anyone with even modest experience to mistake a watercolor for an oil painting.

HOWEVER, my experience in a commercial setting indicates that there are a large number of people who bring in faded posters (e.g. printed on a CMYK offset press) of famous paintings they would like to sell, where they cannot distinguish the difference between an image depicting brushstrokes and actual brushstrokes.

So is it plausible? No. Are enough people inexperienced enough to accept the conceit in a movie? Absolutely. Does this make that plot point problematic? Not really.

It's never labelled a water color. I assume it was made with water-based paints, which are not the same as watercolor paints. Watercolor paint is much closer to ink in that you are more-or-less staining the canvas/paper. You'd never be able to paint with watercolors over top of something else (not without the something else showing through, anyway).

Water based paints (it might have been e.g. acrylic) can be much thicker; plus, it's not implausible that Crown/Anna would have used special paint for this case. In fact, given that he presumably knew it needed to dissolve when wet, I would expect it was something non-standard. (Note that the paint likely would have been obtained prior to the original heist.)

Not the answer you're looking for? Browse other questions tagged plot-explanation the-thomas-crown-affair .

18
How did Crown fold the painting into his briefcase?
10
Why did Yashida fake his own death?
13
The Rock: Mistake or deliberate?
8
Did Donnie Brasco really know the diamond was fake?
9
Why does Terry Benedict refuse to kiss Tess in the art gallery?
13
How did Hela know that the Gauntlet was a fake?
3
Did August Walker fake this injury?