Last night I watched a DVD of Don't Just Stand There, a 1968 comedy-thriller with Robert Wagner and Mary Tyler Moore. A few minutes into the film, those two are seated side by side on an airplane. Wagner looks down at Moore's legs (she's wearing a short skirt) and then he starts a conversation with a gambit which baffled me at the time.

"No, Pamela's my roommate. I just borrowed her legs."

"Well, I'll tell you're taking very good care of them."

Nothing more is ever said about the mysterious "Pamela McCarthy." So whomever she may have been, she was not a character within this film.

I theorized that she was some sort of female celebrity in the 1960s who was well-known, at least in part, for the beauty of her legs. Thus, in the context of the late Sixties, the target audience would be likely to get the joke and appreciate why Mary Tyler Moore's character was not displeased by the suggestion that there was a certain resemblance. But it's been almost 50 years, and I've never heard of her before!

I did some online searching. Nobody named "Pamela McCarthy" or "Pamela MacCarthy" has ever gotten her own page on Wikipedia. (Granted, there could be some other spelling -- the DVD I watched doesn't have subtitles for the dialogue, so I can't be sure of how the name was spelled in the original script.)

When I searched on IMDb, I found that one lady named "Pamela McCarthy" has an entry on that site, but it indicates that her main claim to fame is that after she'd worked as an elementary school teacher for a while, she and her husband founded a company called Hibernia Film Productions. She allegedly has written or consulted on various screenplays over the last 25 years, which seems to preclude the possibility that she was already a well-known figure a half-century ago. So I don't think she's the one the characters in Don't Just Stand There had in mind.

Broader searches, such as Googling for "Pamela McCarthy" and "nice legs," failed to turn up anything promising. (Ditto for when I switched the "Mc" to "Mac.") There seem to have been several women who used one variation or the other of that name, and who at some point were considered "newsworthy" for one reason or another, but none of them seem to have been famous, way back in the 1960s, for owning an impressive set of legs. (Not that I bothered to check out every single link that came up in Google as I searched for various combinations of keywords.)

So I'm hoping someone who knows more than I do about the pop culture of the 1960s will be able to unravel this little mystery for me. Why would Robert Wagner's character think pretending to mistake a girl for Pamela McCarthy was a good way to charm her? Why would Mary Tyler Moore's character instantly know that mentioning that name was a roundabout way of complimenting her legs?

In other words, who was the "Pamela McCarthy" (possibly with a different spelling) whose name was a veritable household word in 1968?

After our extensive searching (yours & mine), I'm sure this "Pamela McCarthy" reference is not about a real character or celebrity.

Robert's character (Lawrence Colby) appears to have just picked the name at random to start a conversation with Mary's character (Martine), and Martine noticed Lawrence staring at her legs earlier so incorporated that into her comedic reply. A little like a "1968 pick-up lines 101" class. There's also smoking on an airplane, and joking about having a bomb onboard, definitely different behaviour from today.

Lawrence Colby by the age of thirty had been a Korean paratrooper, art student, PR man, script-writer, a dealer in art forgeries, and newspaperman, and had once ghost-written the autobiography of a homicidal maniac; he had been married twice, once to an Italian actress with kleptomania and once to a wealthy middle-aged woman who stoned embassies and slugged cops with protest signs at demonstrations; he had been beaten up in riots, shot through the leg in Houston, Texas, by a woman who was trying to kill her husband, and had been down the Cresta Run at St. Moritz three times; but afterward he was prone to look back on all this part of his life before he met Martine Randall as a time when nothing ever happened.

They met just a week after his thirtieth birthday, on a flight from Geneva to London. . . .

The flight had already been announced when he checked in at Cointrin, so he was the last passenger to board. There were two aisle seats left in the first-class section, one beside a bearded two-hundred-pound Sikh in travel-soiled khaki and the other next to a dream of a girl who was reading the European edition of Time, a luscious brunette with a striking figure and deep blue eyes. She glanced up briefly as he came to a decision and sat down.

“I beg your pardon,” he said, after he had fastened his seat belt and verified his first appraisal of the legs, “but aren’t you Pamela McCarthy?”

She smiled shyly. “Not really, I’m afraid. Pamela’s my roommate. I just borrowed her leg.” She went back to the Time.

He sighed. “Well, I’ll tell her you’re taking good care of it. . . . Goodnight, David.” Lowering his seat back, he closed his eyes.

Normally, he would have probed the defenses at least once more, as the minimal tribute to so much girl, but he was tired: he’d been up most of the night before. In a minute or two he had dozed off, and was only vaguely aware when the plane taxied to the runway and made its take-off run. He was awakened briefly by a stewardess offering lunch, but waved it off, and went back to sleep again.

(Lawrence) Colby calls her David too, likely a joking reference to the closing line "Good night, Chet. Good night, David. And good night, for NBC News" from the Huntley-Brinkley Report NBC's flagship evening news program from 1956 to 1970, as Wikipedia describes the line "one of television's most famous catchphrases." Colby considers it all "probing her defenses," so I'm pretty confident it's all a game they're playing.

Page 2 continues with Martine hearing ticking from Colby, they joke that he's got a bomb onboard (!!! “Well, actually, it’s just an old prewar model. They don’t go off half the time.”) but it's three hundred self-winding Swiss watches that started running & ticking because of the turbulence. Apparently he could get in trouble with customs, since Martine says:

“I’m sorry,” she gasped. “I was just thinking of you going through Customs sounding like the “Bell Song” from Lakmi—”

The plane bounced, lurched from side to side, and swooped again. He closed his eyes and could see the three hundred little rotors swinging, storing energy. Damn the Swiss and their ingenuity.

“—and on a flight from Geneva,” the girl went on in that faint voice full of suppressed mirth. “But I’ll come visit you at Wormwood Scrubs. ... Or I’m sure Pamela will.”

“If I had your sense of humor,” Colby said, “I’d never fly. I’d just hang around airports waiting for somebody to crash.”

The line in bold where Martine says "I’ll come visit you... Or I’m sure Pamela will" is pretty definitive that there is no other "Pamela McCarthy," and Martine know that & is toying with the idea that it's her alias. And Colby knows she's joking too. Her next line's even:

“Oh, don’t be silly. We’ll get you through Customs some way.”

Though not a completely unusual phrase, if she were referring to herself and Colby together as "we", she wouldn't have needed the "you" in "get you through," just saying "we'll get through customs" would be correct. Saying "We'll get you through" implies her and her alter-ego Pamela will help Colby.

Lucky for you guys! Pamela McCarthy was a distance cousin of mine. Pamela was a famous model in the 60s and appeared on magazines such as Vogue and Cosmopolitan. She also starred in TV adverts, such as one for fry’s Turkish delights. She however tragically died in a plane crash while she was only in her 20s. Her sister (my other distant cousin) made sure that almost all of the information on Pamela was taken down, as it was too painful for the family. This is why you won’t find any information on her but yes! Pamela McCarthy was a very real person and relative of mine and was very famous up until she died. Here are some images sourced from her sister’s (Geraldine) Facebook. 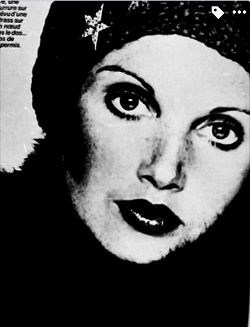 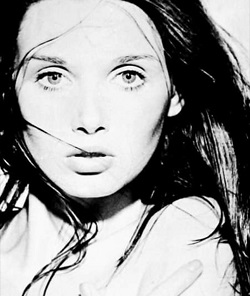 My late mother (she passed away at the age of 34 in 73) was good friends with and worked with Pamela McCarthy at Polydor Records in Manchester in the late 60s. Pam began modelling in the 60s and worked with William Franklin on the Schweppes you-know-who adverts. Her life was tragically cut short in a plane crash en-route to a modelling assignment. I was 9 or 10 at the time, but I remember just how distraught my mum was at the news.

Not the answer you're looking for? Browse other questions tagged dialogue dont-just-stand-there .

4
What is the translation of the song in 40-Year-Old Virgin?
5
What's Mark thinking when he says “enough … enough now”?
22
Where did the line about the reason for the big eyes come from?
1
Divorce in New York: Hitchcock vs. Allen
3
Banker or Bunker?
3
What makes the people in the bar laugh at the beginning of Desperado?