These days you can find all sorts of artwork on the Millennium Falcon, including deck plans. But, I wonder how much was done for the very first movie back in the 1970s. Specifically, I am curious about how the original interior sets harmonized with the exterior mockup(s) and "flying" models, and whether the interior spaces depicted on film could have actually fit in a logical layout within the envelope of the craft as seen from the outside.

As an example of the TV magic underlying my point, I refer to the British soap opera Coronation Street and its iconic Rovers Return pub. Between 1982 and 2014, there were interior sets representing various spaces within the pub, both in front of and behind the bar, and an exterior outdoor set. It was fairly easy to notice that the interior floor plan as depicted couldn't possibly exist within the footprint of the pub's exterior - rooms such as the kitchen would be out in or even on the other side of an adjacent street, and washrooms would occupy much of the neighbor's main floor.

There is, for example, this Millennium Falcon deck plan which I assume was drawn up retrospectively, and appears to pull it all together more-or-less logically. Was this (or other artwork of this sort) actually created for the original movie (for model/set construction)? If not, was anything done at the time which would have mapped out the interiors in a way that would have actually fit all those spaces into the ship as it appeared to stand in the Mos Eisely spaceport, etc..

Even though the pure answer to your question is a boring "There are no old deck plans." and "They didn't really think through the internal layout for New Hope." this is still a great topic.

Because the iconic Millenium Falcon was not the original design for the "Pirate Ship" from the original scripts.

Doesn't look like much, does it? Let's jump a head a few steps to a proper sketch: 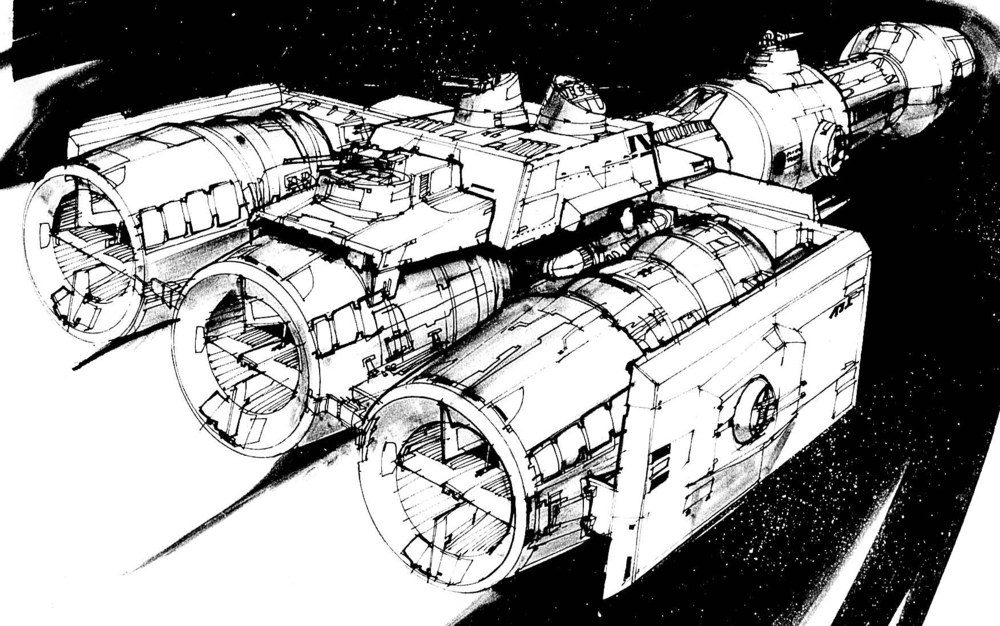 Wait, that doesn't look like the right ship at all...

If anything that's an early and slimmed down CR90 Corvette, however this design would be the look of the Millenium Falcon through the entirety of preproduction and if the rumours are to be believed a lot of the interior set construction as well. 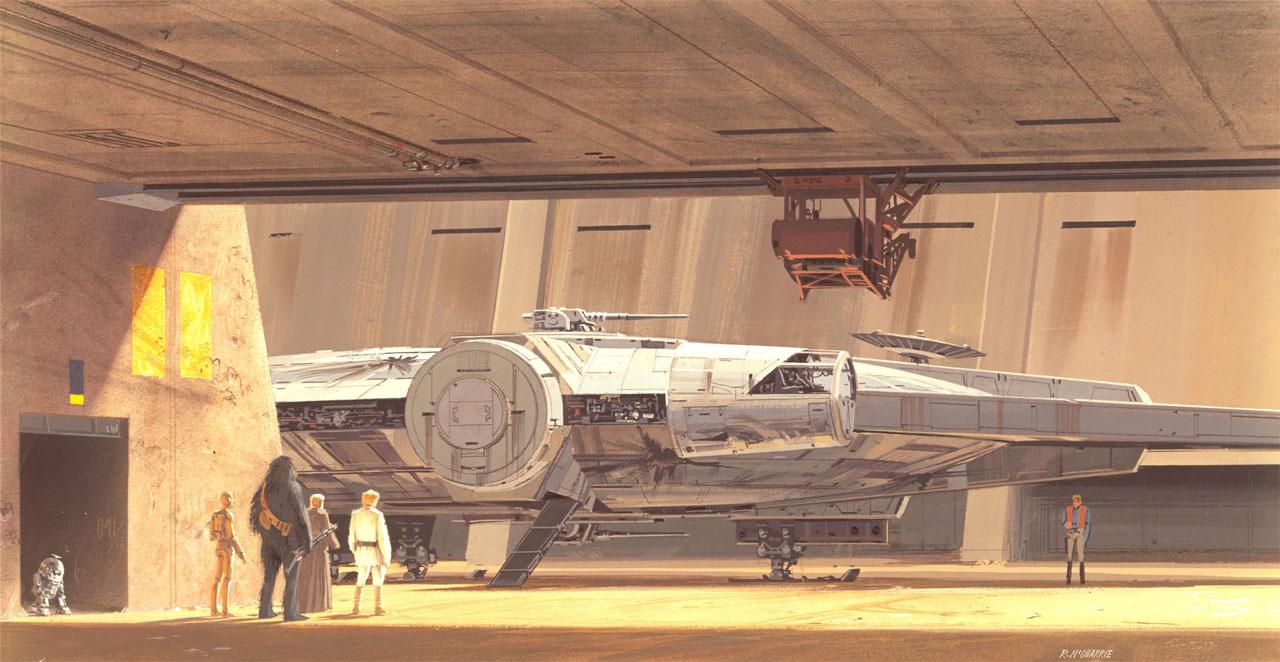 before it we actually had this: 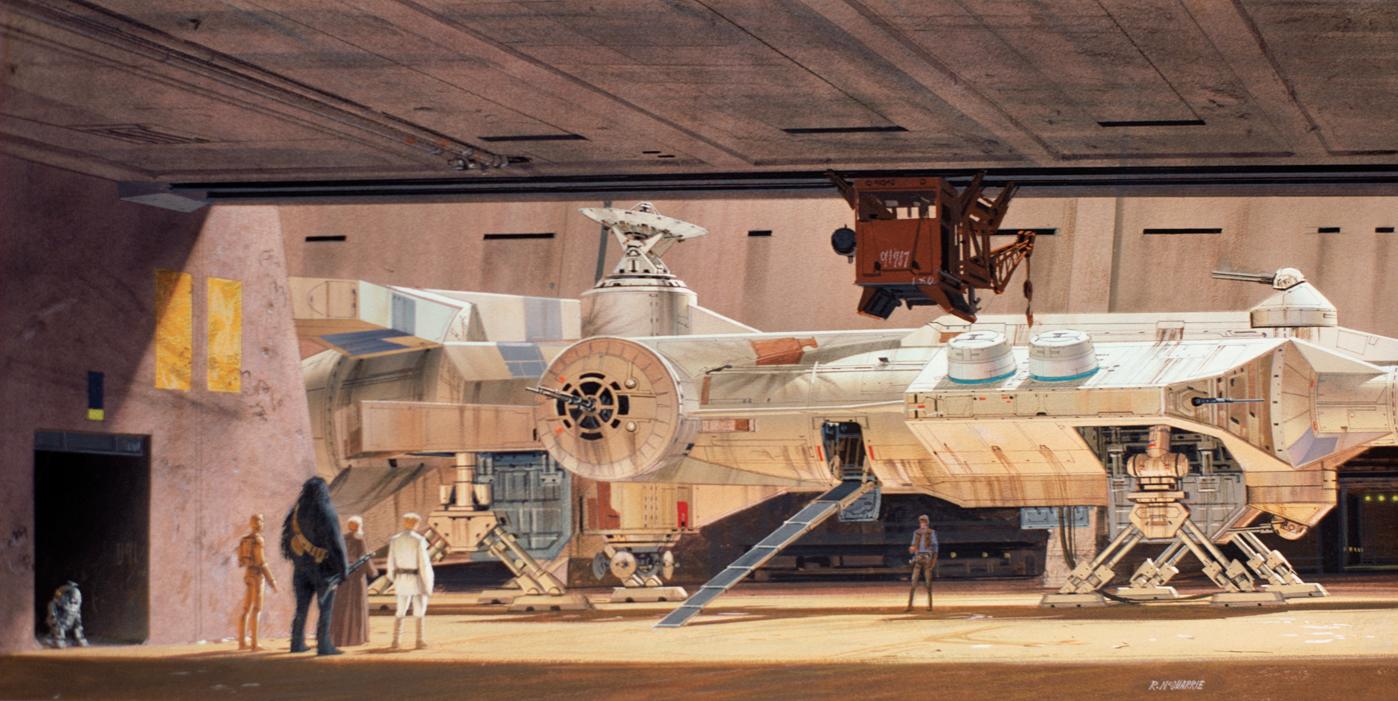 This early Blockade Runner actually had some rudimentary layouting done to accommodate the scenes from the script, which is the closest we're going to get as an answer to your question: 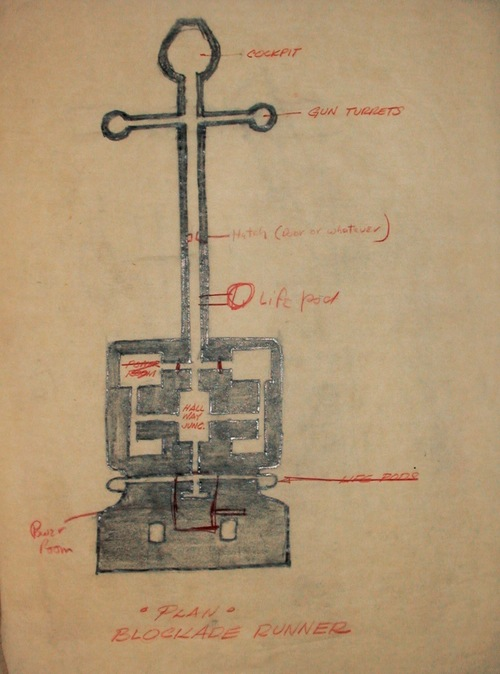 All the pictures in this answer, along with many more images of the design process and the full story on what caused the last-minute switch can be found in this excellent article by Michael Heilemann, which I thoroughly recommend.

(The short explanation is that a new tv show started airing which prominently featured a spaceship with a similar silhouette, and a lot of the modelling budget so far had gone into the Blockade Runner, so they repurposed it)

Not the answer you're looking for? Browse other questions tagged production star-wars .

39
How were R2D2 and C3PO made in the original trilogy?
3
What was the call sign of the clone pilot that helped Obi-Wan and Anakin?
2
Difference between Digital Rights and Satellite Rights?
4
How do movie crews film/control babies and toddlers at the same time?
26
Who snuck the books on board the Millennium Falcon?
5
Release date of blockbuster movies and when they actually finish the movie
2
Why Are Some Movies and Television Shows Still Being Cropped (Pan and Scan) To Fill a Television Screen?