Why are paused frames of DVDs blurry?

Sometimes when I pause DVDs the image is sharp, but in most cases, it is blurry. Obviously the film itself isn't blurry. Is the blurriness actually in the film strip or is it an artifact of the DVD pause process? In the strip below only one of the frames has any blur: 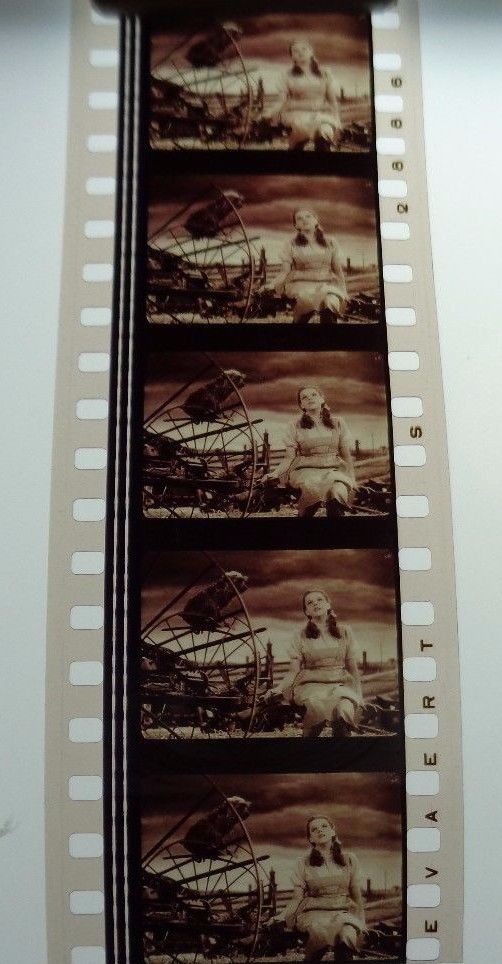 Interlaced video is a technique for doubling the perceived frame rate of a video display without consuming extra bandwidth. The interlaced signal contains two fields of a video frame captured at two different times.

...when you pause an interlaced video, it actually shows you two fields at once, each captured at slightly different times. I guess you could call it an exaggerated form of motion blur, but in some cases, it's actually the second half of one frame mixed with the first half of the next frame, interlaced together. That is why the image looks blurry when you pause it.

This is a result of interlaced video. It's mostly limited to older formats, but you can still see it sometimes on Netflix or Hulu if the source of the footage is old enough, of sometimes when you pause the local news (even in HD) or certain other video sources.

So, what is interlaced video? As others have pointed out, film usually runs at 24 frames per second, but back in the 1950s when television standards were being created, the engineering limitations of the time meant that the frame rate of video had to match the electrical grid's refresh rate, which in the US was and still is 60hz, or 60 cycles per second.

Okay, that's great, right, 60 frames a second, then? The problem was that the technology of the time couldn't process or transmit an entire frame's worth of information that often, and besides, filmmakers were already familiar with the 24 frames per second rate of film. So they compromised and developed a system that captured half of a frame 60 times a second.

So, okay, no big deal, that works out to 30 frames a second, right? Nope. Video cameras of the time couldn't buffer anything, so it literally sent half of a frame 60 times a second, and televisions displayed half of a frame 60 times a second. Because time waits for no man (or camera), each half-frame captured it's own separate point in time. These half-frames are called fields, each composed of alternating horizontal lines. Of course, if one field contained the top half of a frame and the other contained a bottom half of a frame, the resulting moving image would always look like it had a slight tear in the middle, and the screen itself would look a bit like a flip book, so, the odd numbered fields contained the odd numbered lines of the image, and the even fields contained the even numbered lines of the image.

Video cameras long ago developed the ability to capture an entire frame at once, but video formats and televisions in wide use couldn't display a single frame at a time until the 2000s(!). This meant that Hollywood films and other content that was captured using whole frames were still copied to VHS and even DVD using fields instead. Later-era DVDs and early HDTVs were able to use a feature called Pullup/Pulldown to take the original 24 frames of a motion picture, chop them up in to a set of 60 fields in order to be written correctly to a DVD, and then put back together and displayed as 24 frames by the DVD player. It wasn't until Blu-ray that true progressive frames rather than fields were actually native to the entire technology stack (media, player, TV).

Not the answer you're looking for? Browse other questions tagged cinematography distribution .

1
Why is Phantasm II available on Bluray while the other movies in this series are not?
17
Why is Independence Day: Resurgence not released on July 4th?
4
What are the two rectangles on videos before release?
16
Are lights a worthwhile investment?
6
How are movies distributed internationally?
13
Where does poor video quality in some TV series originate?
2
Are there any definitive reasons why most online libraries won't stream movie to computers in 4k resolution?