Lippe, played by Pat Roach, is a thug ordered to kill Bond. As you will see, he is very strong and tough, but not on a level with Jaws or Oddjob (Bond can at least hurt and move Lippe in contrast to the other foes who simply ignore Bond's best efforts).

What is now interesting is once Bond tries to use a knife (which is a dangerous weapon), Lippe removes a kind of flexible mace from his belt and destroys the knife. The mace seems to be very powerful, it hacks an iron form apart. Here a better image: 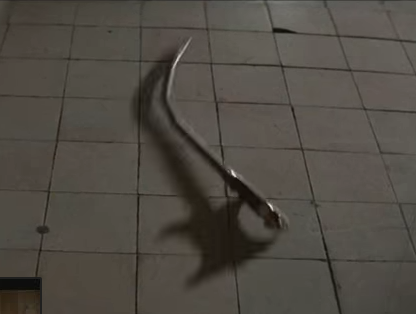 Does this kind of weapon really exist and is it as powerful as shown in the movie? Who came up with the idea of the weapon during the movie?

This type of baton has no official name, but vendors sell them as "whip batons" or "spring batons" or "flexible batons".

Usually spring-type batons have the spring in the middle and a steel rod at both ends, kind of like nunchuks. For example,

It is possible that they took such a baton and just removed the steel rod at the end for the purposes of the movie.

This weapon does appear to be some sort of modified baton. However, the weapon is not what's powerful, it's the user.

The character who uses this weapon is named Lippe. He has super human strength. This is why the weapon appears to wield so much power.

He is merely an assassin sent by Fatima Blush to kill Bond at the health clinic. Unlike previous versions of the character, Lippe possesses almost superhuman strength, similar to EON characters Oddjob and Jaws.

A highly esteemed British firearms expert and author of several standard reference works on the subject, who is best known to the general public for giving weapons advice to James Bond author Ian Fleming.

There is no clear evidence that Mr. Boothroyd directly created this particular weapon, but he was a source of expertise in terms of weapons used by James Bond.

Not the answer you're looking for? Browse other questions tagged realism james-bond .

6
In Casino Royale, what Exactly does Bond say at this moment?
3
What kind of creature bit the enemy's leg in China in Skyfall?
5
What significance does the James Bond theme have in the movies?
8
What happened to Lazenby as Bond?
12
What does the barkeeper say to James Bond (possibly in Turkish)?
12
What was James Bond going to do in the Space Shuttle?
15
What does the “License to Kill” of James Bond actually mean?
16
What is the significance of the special opening credits in Bond movies?