Who are these two persons Travis was staring at?

In the start of the movie Taxi Driver, when Travis was sitting with other cab drivers, he was staring at these people who were also staring back at him. 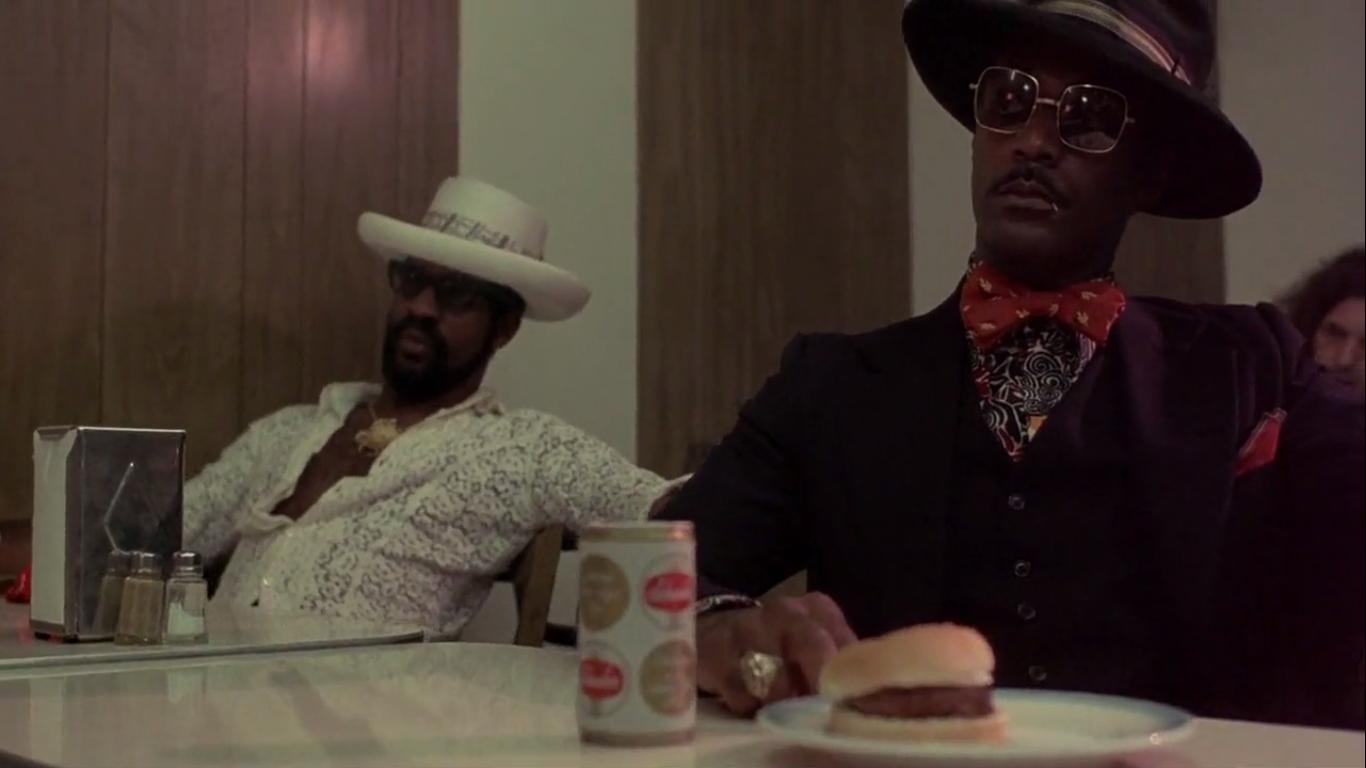 After a taxi driver shows some "piece" to Travis that he declines, he was found looking back at those people. 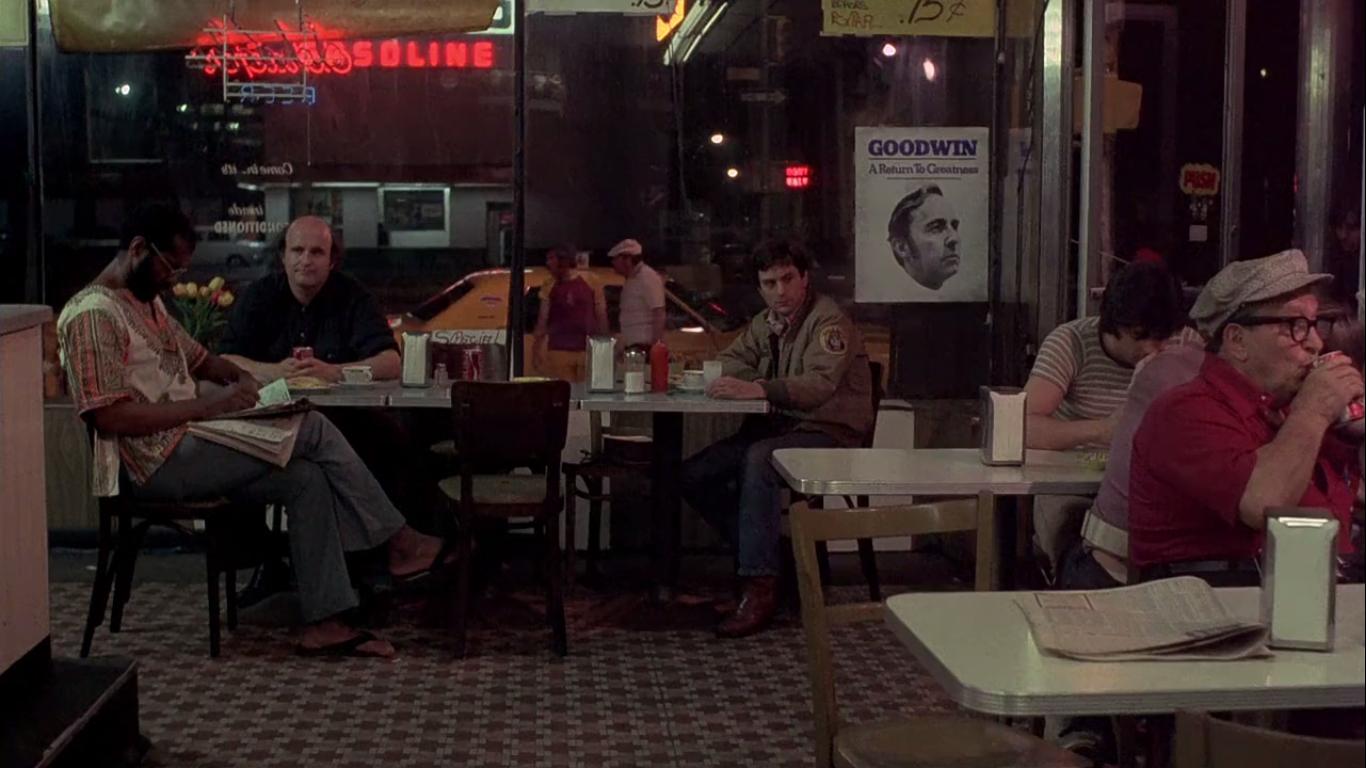 Who were these people?

In Paul Schrader's original script, the diner scene is described in scenes 17 to 23 (the 104 pages version on lc.nc.edu.tw describes it on p. 16 f.) and here's the introduction:

So this is the atmosphere Schrader wanted to capture. Scorsese largely follows, but he deviated right there. In Schrader's script, Travis is staring at hippies, not two pimps*.

Tricia Rose describes pimps like this in The Hip Hop Wars in chapter 8:

ONE OF THE SIGNATURE ICONS that drives commercial hip hop is the pimp. An important facet of urban street cultures and illicit economies, and once relegated to folklore, underground vernacular culture, and the margins of mainstream society, pimps have become popularized and mainstreamed. Building on the glamorization of black pimp culture in blaxpoitation films of the 1970s and on the influence of raw sexual hierarchies exported from prison culture, many rappers began drawing from pimp culture, style, slang, and attitude as part of their identities.

The stereotypical pimp showcases his new wealth, based on prostitution, in an extreme way. What Rose describes can be seen in 50 Cent's 2003 singe "P.I.M.P." from Get Rich or Die Tryin':

In a 2016 article for IndieWire, Nick Santos collected quotes by Quentin Tarantino about Taxi Driver:

So actually, you do see the world through Travis Bickle’s eyes. And through those eyes, he makes, you know, the black pimps and the black characters on the street, they are repellant. He flinches away from them at all times. And since you are looking through his eyes, you do as well. One of things that actually could be crippling from the movie, thematically, you could even say it’s the film’s big flaw. Which, actually, by the end of the movie, doesn’t turn out to be.”

Cynthis Fuchs in her analysis of Taxi Driver on p. 704 of Film Analysis:

From Travis's point of view, which becomes increasingly disturbed and constricted, anyone who looks "different" makes him uneasy.

In his analysis of this scene, Axel Debenham-Lendon writes:

The real notion of Travis’ racism come shortly after as the camera begins moving camera rising above a hunched over Travis anxiously glancing to the other side of the room. We cut to shot 8 dollying past a pair of pimps, Doughboy’s voice becomes slightly distant as Travis zones out, a pan back with shot 9 signals his return to the conversation. The racial implications are secondary to the visual effect as Scorsese uses this movement coupled with the sound to give the audience the impression of entering Travis’ subjective mental state.

Roger Ebert in his 2004 review, about Scorsese's use of slow motion:

But Scorsese was finding a personal use for it, a way to suggest a subjective state in a POV shot. And in scenes in a cab driver's diner, he uses closeups of observed details to show how Travis's attention is apart from the conversation, is zeroing in on a black who might be a pimp.

They are probably pimps and not only show the corruption and decay Travis sees everyday. In Schrader's original screenplay that was their only role, mentioned at the beginning only. But Scorsese focuses on them and lets us enter Travis' mind as he stares at them, forgetting for that very moment everything around him.

p. 20: "Travis' eyes turn toward the restaurant's other patrons. POV: THREE STREET PEOPLE sitting at a table. One GUY, stoned, stares straight ahead. A raggedly attractive GIRL rest her head on the shoulder of the other, a heavily bearded YOUNG MAN with a headband. They kiss and tease each other, momentarily lost in their separate world. Travis watches the hippie couple closely, his feeling sharply divided between cultural contempt and morose jealousy. Why should these people enjoy the love and intimacy that has always eluded him? He must enjoy these schizoid emotions, because his eyes dwell on the couple."

Not the answer you're looking for? Browse other questions tagged plot-explanation taxi-driver .

5
If Liber8 can hack Keira, why doesn't Keira or Alec hack them back?
4
What does Eli mean with the words “Be me, for a little while”?
13
Has there ever been a chain of art imitating life, and life returning the favour, like the one involving the film Taxi Driver (1976)?
41
Who was the fifth one that was killed by Harvey Dent in The Dark Knight?
9
Why does Travis Bickle attempt the assassination?
5
Two different cameos of Martin Scorsese in Taxi Driver
3
Piece of paper that was given to the main actor in Yesterday?
3
How did the two strange people also get to know about the Beatles music?