Why did Warner Bros spend $25 million to CGI out Henry Cavill's mustache?

After scrolling on Twitter loads of people have tweeted about how Warner Bros. spent $25 million worth of CGI used to remove Henry Cavill's mustache in Justice League. 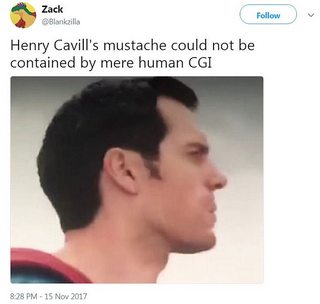 Anyway back to the point why did Warner Bros spend 25 million to remove Henry Cavill's mustache instead of asking him to shave, even better keep it on !

I mean Justice League would have been infinitely better if Superman had a tache! 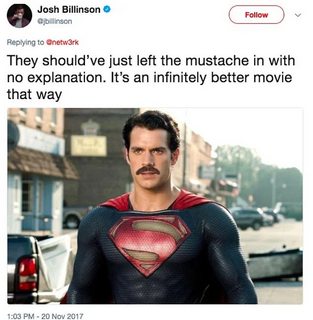 By the way just to be clear the question is "why didn't they just ask him to shave instead of spending so much money on CGI?" and not "why didn't Superman have a mustache?"

They shoot Justice League without Henry Cavil's mustache, and after the shooting he signed in for MI6, which required his mustache so he grew a mustache.

And that's when tragedy happened. Zack Snyder, Justice League's director, stepped down due to a family tragedy. In response, Joss Whedon stepped up to helm the film and also called for a few reshoots ($25 million worth of reshoots, actually).

Sadly, Paramount would not allow Cavill to shave the mustache he had grown for Mission Impossible.

So WB had to remove it in CGI. Refer zimbio

Because of his commitment for Mission: Impossible 6, he was not allowed to do so, from screenrant.com

Mission: Impossible 6 director Christopher McQuarrie reveals why Henry Cavill can’t shave his mustache for the current Justice League reshoots. In a film that marks the return of several beloved franchise cast members – including Tom Cruise, Rebecca Ferguson, Ving Rhames, Michelle Monaghan, and more – Cavill is one of the most exciting new additions to the Mission: Impossible franchise. And while plot details for the film are being kept under tight wraps for the time being – rendering Cavill’s character in the film a complete mystery – McQuarrie and Cavill haven’t been afraid about teasing his time on set for the film over the past few months.

In exactly one year you’ll understand: The only way to keep a fake ‘stache on Henry Cavill would be a liberal dose of staples. #MI6 07.27.18

And having a Superman with mustache would be very risky, especially when half of the scenes will have no mustache, which are not reshoots. And a few reshoots are used in the start of the film too.

And this is what Henry Cavill said on his instgram: 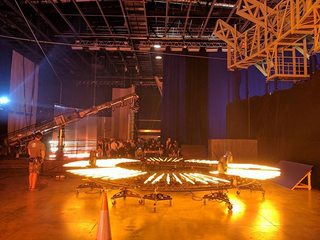 Dear followers,
it is time to finally set the record straight in this moustache fiasco. Pictured above, is not a set on MI6 but is in fact the latest in a series of weapons being designed by Warner Bros and Paramount Studios to combat the entity known as "Henry Cavill's Moustache". There has been no discussion over whether to shave or not to shave for the JL reshoots, simply a relentless campaign to put an end to the seemingly inexorable conquest of this despotic 'stache. It is not a question of IF I should shave - it is a question of how can we possibly be victorious against such a beast without bringing our own doom raining down upon us.

"When the question came, the reshoots for Justice League came out, [Charles] Roven called me, and he said, 'We need your help and we need to shave Henry's mustache. We need him to come back and we need to do these reshoots.' And I said, 'Look, Chuck, naturally I want to do everything I can to help you, but I also have to think about our production. Let me talk to everybody and figure out what the scheduling would be.' And I went and spoke to [Mission: Impossible-Fallout producer] Jake Myers, and the suggestion was made through channels that we shave the mustache and Henry could begin to grow the mustache back and that then there would be, they would give us the resources to digitally fill in Henry's mustache. Because like it or not, a fake mustache in close-up on a 75mm lens is never going to look like anything but a fake mustache."

"So, we offered the following compromise: Jake Myers calculated the amount of money that it would take to replace the number of shots, and essentially what Jake was able to project was about a $3 million visual effects budget. We said, here's what we'll do: give us the $3 million and we'll shut down, and that will give Henry Cavill the time to grow his mustache back, and we'll just shut our movie down. We said we'll do this, at which point, somebody from Paramount Pictures said, 'What is going on? What are you people even talking about?' They're like, 'There's no way we're going to do that.' We were just like, 'Okay.' That was the best plan that we could come up with." - movieweb

So it seems Paramount was not ready to compromise here.

He was contractually obligated to keep the moustache and it was unfortunate that Justice league had to be reshot by Joss Whedon.

I am quoting a Nerdist article:

Cavill was also filming Mission Impossible 6 at the same time as reshoots and his character had facial hair. He was contractually obligated to keep said facial hair, so the mustache had to be very carefully removed by a series of digital artists for Justice League.

Not the answer you're looking for? Browse other questions tagged production dc-extended-universe justice-league .

11
Why did Ethan Hunt dream of Solomon Lane with a beard?
2
Which of the Superman scenes of Justice League are from Henry Cavill's CGI-removed mustache?

2
Which of the Superman scenes of Justice League are from Henry Cavill's CGI-removed mustache?