Who is this character in the bonus scene of Justice League?

In one of the two bonus scenes of Justice League,

Lex Luthor escapes prison and is joined in a boat by some other character, wanting to create a League of his own.

Who is this character? 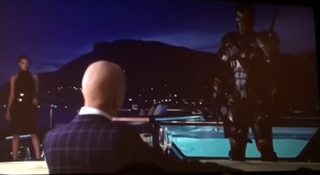 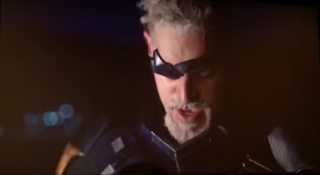 Slade Wilson / Deathstroke makes an appearance in the post-credits scene of Justice League portrayed by Joe Manganiello. After Lex Luthor had escaped from prison, he meets up with Deathstroke as they plan to make their own league.

Lex even addressed him as "Mr Wilson" and Deathstroke is part of many incarnations of Injustice League which Lex hinted in that scene. Even in new 52 version Lex is the founder of the league and Deathstroke part of it. Deathstroke looks is even similar to his New 52 counterpart : 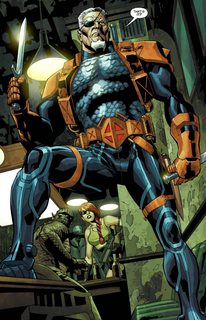 Also there is a Deathstroke solo film under development.

Bellow is his behind the scene look: 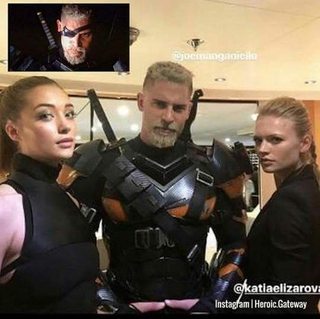 This character is Slade Wilson, who appears in the Arrow series. There, his complete evolution is explained in detail.

Slade Wilson (born c. 1968), also known as Deathstroke the Terminator, is a former member of the Australian Secret Intelligence Service and an ASIS unit, the secret mastermind behind the Church of Blood, which he used to recruit individuals for his army, and the mentor-turned-enemy of Oliver Queen(Arrow). Slade is also the father of Joe and Grant Wilson, and was also very close to Shado before her death, being secretly in love with her despite her affections for Oliver.

Slade was initially an ally of Oliver(Arrow) on the island, where he taught the shipwrecked playboy the majority of his combat skills (which he would later utilize in his crusade as the Arrow).

Slade was later injected with an experimental Mirakuru serum after a near-fatal accident, and embarked on a crusade of vengeance against Anthony Ivo for killing Shado. Slade swore vengeance against Oliver as well upon learning that he chose to save Sara Lance over Shado, a woman he supposedly loved. During a climactic battle aboard the Amazo, Oliver presumably killed Slade after stabbing an arrow into his right eye.

However, Slade survived and returned five years later as the mercenary "Deathstroke", with the intention of taking away everything and everyone Oliver held dear as vengeance for the events that transpired on Lian Yu. Working with Sebastian Blood and Isabel Rochev, Slade gathered an army and launched an all-out assault on Starling City, murdering Moira Queen in his blood lust. His plan ultimately failed, as he was cured of the Mirakuru and subsequently imprisoned in an A.R.G.U.S. facility back on Lian Yu.

However, in May 2017, Oliver visits Slade again on Lian Yu. Having long-since recovered from the mental-impairment of Mirakuru, he agreed to Oliver's requests to help in freeing his friends and combating Adrian Chase, all in the hopes of redemption and to find his lost son Joe. After Adrian was defeated and the island exploded, Slade started his quest to find his son Joe after visiting and making amends fully with Oliver.

Unknowingly to him, Slade fathered a son named Grant Wilson, who (in one potential future) would take up his father's mantle as Deathstroke

Refer these links for more info on this character:

Not the answer you're looking for? Browse other questions tagged character dc-extended-universe justice-league .

17
Is this Green Lantern and Batman reference intended for a Justice League movie?
6
Does Wallace Keefe know Lex Luthor's plan in Batman v. Superman?
7
How did Lex Luthor create the monster?
2
Who is this fallen member from Young Justice: Invasion?
21
Who were the other two heroes with Superman in the newspaper article who left?
16
Why is Batman not so careful about his secret identity in the Justice League?
2
Which of the Superman scenes of Justice League are from Henry Cavill's CGI-removed mustache?
14
Major Justice League continuity error?
5
Has the Flash's origin been changed by Justice League?