What is the Supergerm in the Justice League film?

In Justice League, we see a scene with a newspaper front page, which I have already covered in the similar question but there is a mention of a Supergerm in the left corner: 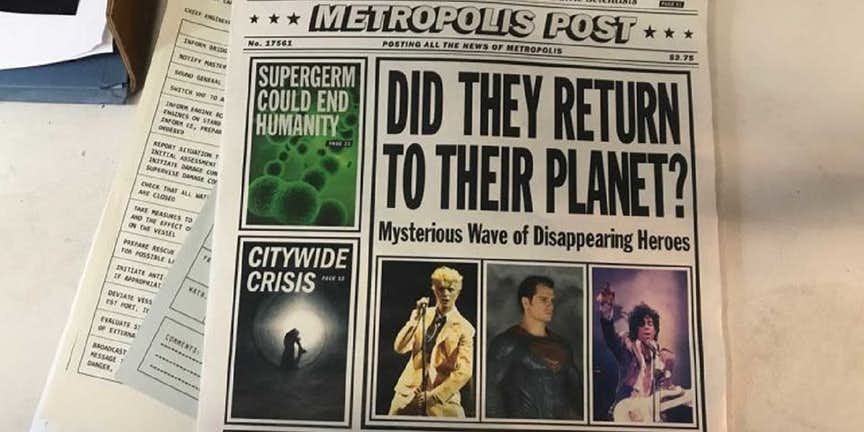 Is it a nod to some comic book thing? Or a hint to a future villain?

Is it a nod to some comic book thing? Or a hint to future villain?

It could be a nod to some comic book thing, but I haven't read any so I can't really say. It could be a hint to a future villain, but this part is pure speculation for now.

However, this hints to a Superman's deed he did in BvS.

We see the similar news headline on the wall at Wallace Keefe's apartment, between 00:25:30 to 00:26:00, along with other headlines of Superman's deeds in BvS. 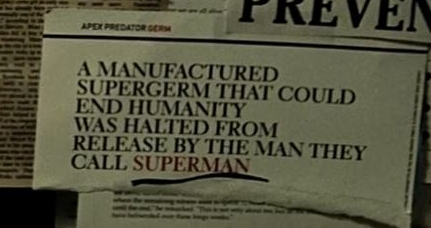 On the right side, we can see a note saying,

A manufactured supergerm that could end humanity was halted from release by the man they call Superman.

It's safe to assume that Superman prevented this virus thing from releasing in the past.

However, with him gone, there is a chance that someone is again trying to release that virus. And this headline can be a hint to this and an Easter egg. In the beginning of Justice League, we are told that this is a desperate time where Superman is not alive, crimes are at peak and people are in trouble. We even see some crooks trying to steal from a shop in Justice League. So, that Supergerm headline could be one of those things that's happening because Superman is not there to stop.

I seriously doubt the mention of a 'supergerm' is a nod to anything from the comics, but if so, the most likely candidate is one related to Green Lantern.

There is a somewhat obscure villain in the Green Lantern titles named Despotellis, and he is a sentient virus - the only one of his kind. Despotellis is a member of Sinestro's yellow Lantern corps (The Sinestro Corps), and is often used by Sinestro to soften up an enemy before attacking.

Given that we do not yet know how the Green Lantern characters will be used in the second film, it's possible that Darkseid (rather than Sinestro) sent Despotellis - or something like him - to Earth as a prelude to his invasion.

As noted in AJ's answer, it's far more likely that the 'supergerm' mention is just designed to show how awful the world is without Superman. In medical jargon, a 'supergerm' is one that has mutated and is now immune to existing vaccines and/or cures.

It is possible that it could be a reference to an obscure card game. In Nuclear War, a card game from the company Flying Buffalo, there is a rather infamous card - the Supergerm: 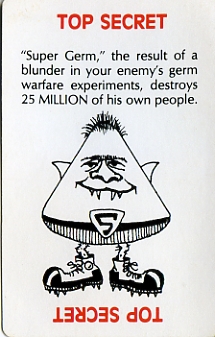 This card was iconic enough to appear on t-shirts sold by the company.

The game just celebrated its fiftieth anniversary and was a staple of geek gamer culture in the 1970's and 1980's.

21
Who were the other two heroes with Superman in the newspaper article who left?

20
What are the qualities of Watchmen unique to comics and in which way did the movie achieve to adapt those to the medium of film?
7
Is the Batman armoury a homage to 1989's classic Batman film?
8
Who is this character in the bonus scene of Justice League?
2
Which of the Superman scenes of Justice League are from Henry Cavill's CGI-removed mustache?
14
Major Justice League continuity error?
5
Has the Flash's origin been changed by Justice League?
4
How many different Batsuits were used in Justice League movie?