Was Bruce Wayne's car specifically designed for the movie?

The beginning part of Justice League features a neat product placement by Mercedes-Benz in the form of Bruce Wayne's car he drives around in to meet up with Barry Allen. 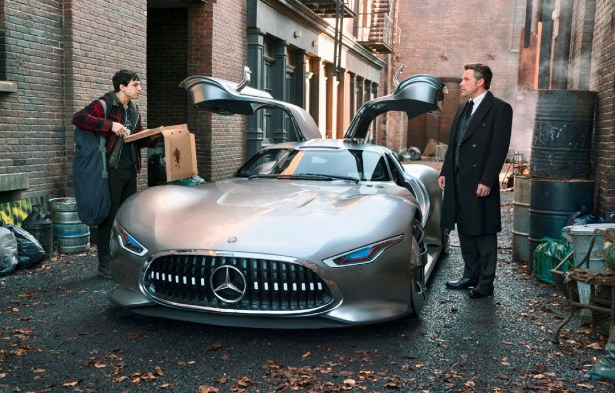 Now personally this car pretty much reminded me of the old Batmobile from the 1989 Batman film (which also found its way into various later interpretations of the character and his signature vehicle). It might, however, as well have been a reference to his Batmobile in this very same DCEU film (which might in turn be somewhat of a mixture of previous Batmobile incarnations as well). But disregarding if it was a reference to a specific movie or Batmobile version at all, it certainly looked remarkably otherworldly and "Batmany".

Now it's not a novum that a car manufacturer gets involved with the making of a film in order to design a unique car for the movie as a nice piece of "product" placement, as has been done by Audi with Will Smith's car in I, Robot for example. So what I'd like to know is if this car was specifically designed for the movie in a cooperation with Mercedes, maybe with the actual production design team of the movie involved. Or is this just a real existing car model that was chosen for the movie for whatever reasons? Or is it entirely an offspring of the production designers that just got the Mercedes star tacked onto it after striking a sponsorship deal with the company?

Was Bruce Wayne's car specifically designed for the movie?

Partially yes, it was a concept car designed for a video game and named Mercedes-Benz AMG Vision Gran Turismo but was made into a real functioning car for the film and of-course the crew was also involved too as shown in the video below. And Ben Afleck is 6"4, so the car's size was increased by 10% from the original concept design, because it was not meant to be for real driving.

In the cool video above, we learn that Justice League director Zack Snyder saw the Mercedes-Benz AMG Vision Gran Turismo in a video game. It wasn’t even a real car. They had it built specifically for the movie and had to make it 10% larger in order to accommodate Ben Affleck’s large 6’4″ frame.

We also learned that Gal Gadot will be getting her own car in the movie as well. She’ll be driving a less flashy, but still good looking, Mercedes-Benz E-Class Cabriolet.

Even Wonder Woman's car will be exclusive as it's a single released prototype as mentioned in the video above.

And as Audi have a tie-in with Marvel, DC is having it with Mercedes as clear from this trailer too:

And as the other answers suggested, the concept car was presented in an Auto Show 4 years ago but it was not meant to be used that time and didn't even have an engine:

That's right: Mercedes created the AMG Vision Gran Turismo Concept both to catch eyes in LA and for use in "Gran Turismo 6," an upcoming video game for the PlayStation 3. While the actual concept car doesn't have an engine, the playable version in "Gran Turismo 6" will feature a 577-horsepower twin-turbo V8 that boasts a whopping 590 lb-ft of torque.
- autotrader.com

The car in question is a Mercedes Vision Gran Turismo.

This link indicates that the car has been around for at least 4 years (as that's when the article was written) as a concept. It appears to have been designed for the Gran Turismo 6 Playstation game. To quote from the article:

The Mercedes-Benz AMG Vision Gran Turismo has made its bow at the Los Angeles motor show. It is the response to a request from Gran Turismo 6 producer Kazunori Yamauchi to see concepts that preview ‘the further development of the automobile’. It also, to our eyes, appears to preview what we can expect from Merc's new SLS-replacing sports car.

The AMG Vision concept may look to the future, but several of its inspirations are clearly from the past. There are nods to the classic 300SL and the current SLS AMG in its shape, though its gorgeous side profile is a big departure. The car's aerodynamics look much improved and the heavy use of LED lights gives it a far more futuristic look, bringing the Jaguar C-X75 concept to mind from a number of angles. Those iconic gullwing doors are retained, though.

The body is an aluminium space frame, while a number of the Vision’s components are made from carbonfibre. As a result, the kerb weight is rated at 1385kg – around 250kg less than a regular SLS. And the Vision’s 577bhp, 590lb ft 5.5-litre twin-turbo V8 (borrowed from the new E63 AMG S) ensures its 0-60 time and top speed will be an improvement over the SLS AMG’s respective 4.1sec and 197mph. A sports exhaust system with eight rear tailpipes also promises a fairly epic soundtrack to match the performance.

However, all isn’t quite as rosy as it seems. Perhaps predictably given the car’s reason for being, the one you see in pictures is a full-scale model of the AMG Vision that will star in GT6. If you want to drive one, your only option is on your Playstation…

Below is the story behind the Mercedes AMG Vision Gran Turismo's creation, with a handful of slightly predictable quotes from its design team about 'sense of purity' and how emotional the styling is, though there is plenty of interesting stuff in there too, including how the car had to be designed to compete with - and be selected for play above - the other 1199 cars in the game. By being the first Vision Gran Turismo concept ahead of equivalents from Alfa Romeo, Tesla, Subaru, Peugeot and a host of others, the Mercedes AMG concept has a head start.

Pic from the article: 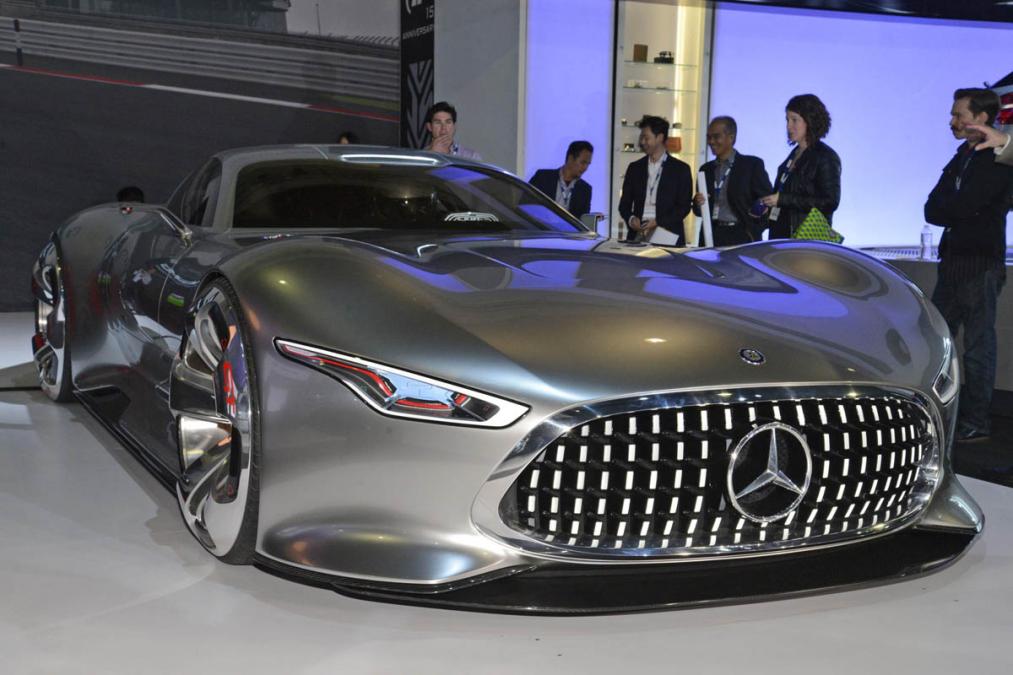 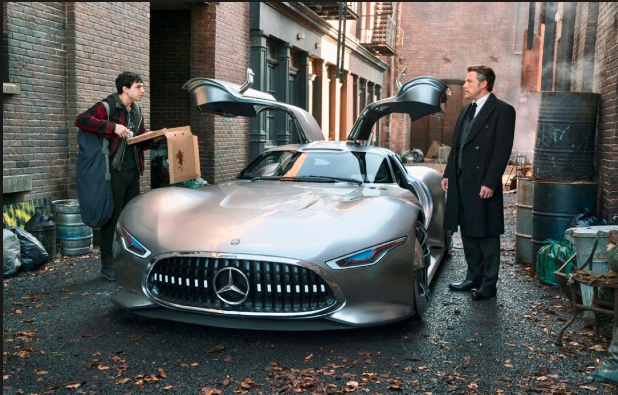 Not the answer you're looking for? Browse other questions tagged dc-extended-universe props justice-league .

20
What is the symbolism of the remote controlled toy car?
3
What is Neil Patrick Harris drinking?
2
Why was a 1967 Impala chosen as Dean Winchester's car in Supernatural?
10
Do Batman Begins and Batman vs Superman have different origin timelines for Bruce Wayne?
2
Why the apparent lack of IMAX 3D releases for Justice League?
6
Did they deliberately release the new Justice Leage film on the same day the Justice League animated show was broadcast?
4
Was Flash's message in Batman vs Superman for the event occured in Justice League?
7
How was the Etch a Sketch art of Mona Lisa made for Elf?