How is this image of an actor made to appear in the audience?

During the TV broadcast of the 3rd Asianet Comedy Awards, a famous Malayalam actor (Jagathi Sreekumar) was seen in the audience. This baffled me, since he has been paralysed for the last several years and has not travelled much. When I watched the re-telecast, it was clarified that this was accomplished using "new digital technology." What is this technology? I've never seen it used before. Here's a video of the feat:

I agree with the comment from EvilDr: this looks like simple chromakey. Specifically, there was a space in the audience between the man in the pink shirt and the man in the blue shirt. An image or video of Jagathi Sreekumar was added in between them. (I can't watch the video you included, because I'm in the United States, so my answer is based on the still image.)

One thing to note: There is no shadow on the red carpet underneath his wheelchair. There are normal-looking shadows underneath the other men's feet. This commonly happens with chromakey. 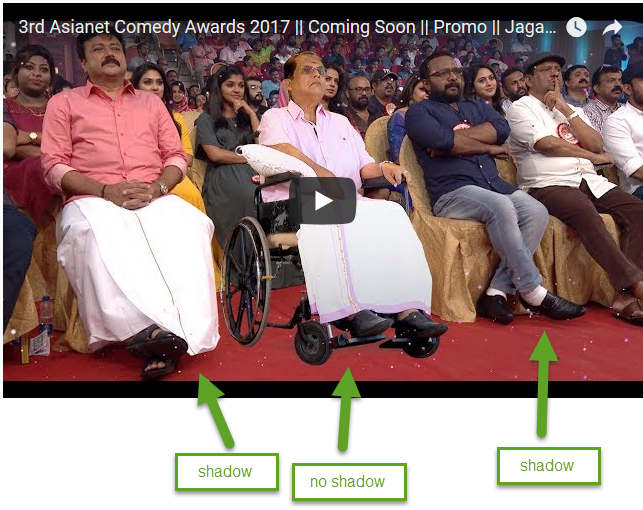 Since this is the 3rd Asianet Comedy Awards, I suspect that they were joking when they called this "new digital technology".

12
Subconsciously influencing the audience with embedded single frames
14
How is this shot in Batman made?
10
How did Xerxes appear so much larger than Leonidas?
4
Why is the audience sliding around in this scene from Le Temps retrouvé?
4
How was this opening title sequence from Atkinson's Maigret made?
36
How was the motorcycle scene in The Matrix Reloaded made?