What were the rats eating near the cave?

In a scene of Shutter Island, Teddy Daniels goes in the search of his partner Chuck's body and couldn't find him. When he was looking for him, a mischief of rats come out from a hole. He looks at them in a doubting face.

They look like dead matter of some creature to me.

This scene is of course one of Teddy's hallucinations, but I would try to answer your questions in order.

What were the rats eating? They weren't shown to "eat anything" here. I do have a part of the original script written by Laeta Kalogridis where she mentions quite a bit about the rats but she doesn't say anything about them "eating anything", as this was of course a hallucination which leads to an even more important "Cave Scene" 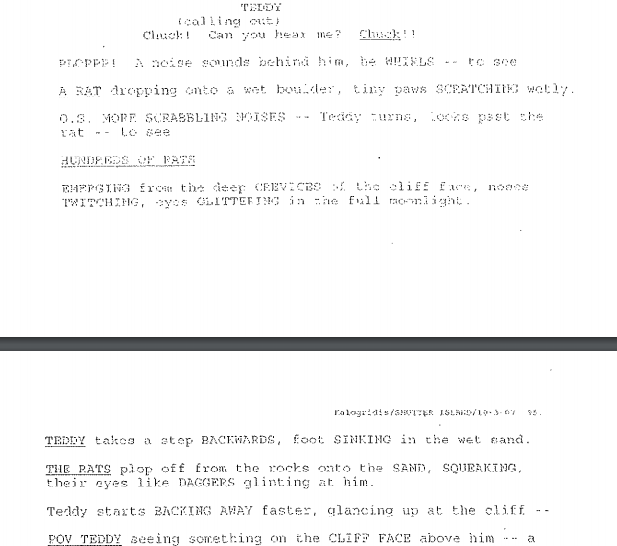 HUNDREDS OF RATS EMERGING from the deep CREVICES of the cliff face, nose TWITCHING, eyes GLITTERING in the full moonlight

THE RAT plop off from the rocks on the SAND, SQUEAKING, their eyes like DAGGERS glinting at him."

And to answer your second question: What is the significance of this scene?

Teddy himself says “survival instincts become defense mechanisms”, him finding a cave to survive the storm. Before this, he sees Chuck’s corpse on the rocks but it is seemingly washed away by water, wiping away another made up image. He then sees hundreds of rats pouring out of a hole, signifying erupting desire out of paranoia and initiating the Rachel hallucination. Source

So, finding the cave, was in itself a manifestation of Teddy's own mind using "survival instincts" and the rats were most possibly, remnants of his past life during his days at the German Camp, where he may or may not have been a part of and witnessed mass shooting and the pile of the corpses laid alongside the path.