Is the character Colin Sweeney in "The Good Wife" a reference to Sweeney Todd?

Colin Sweeney (Dylan Baker) is a recurring character on the series The Good Wife (and spin off The Good Fight) introduced in the season one episode titled, Bad. 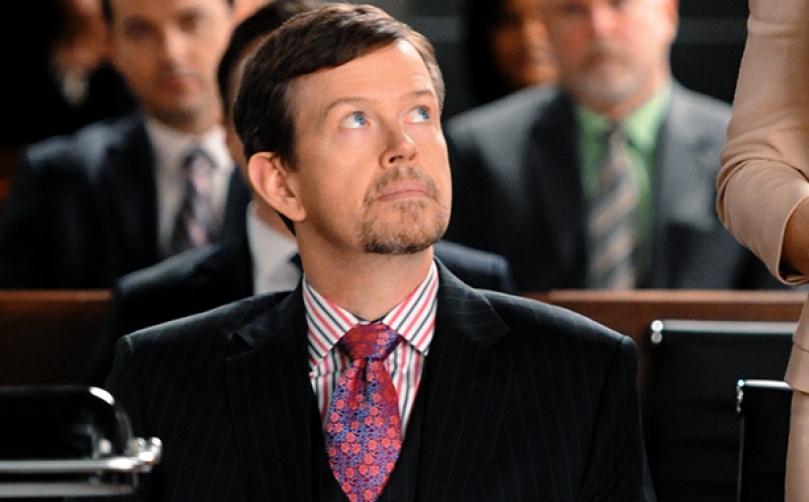 Throughout the series his role often centers around the idea that he kills women, particularly his wives, and is given the loose moniker of 'Wife-Killer'. Most of the cases/episodes that the character's involved in, tend to revolve around some controversial women, sexual violence/assault, murder, and his company/money. Now although at the end of this first episode, a body is produced, there is also this exchange between Julius and Cary:

CARY: I heard it was a necrophilia thing.

JULIUS CAIN: No, he chopped her up: put her in the dog food.

JULIUS CAIN (CONT’D): What was that jury thinking?

CARY: Tough to convict when they never found a body. The perfect crime.

I was wondering if the character's surname Sweeney was a direct reference to the character Sweeney Todd (Penny Dreadful, Musical, Film Adaptation), a serial-killing barber, along with his a female love-interest, Mrs. Lovett, bakes Todd's victims into pies??? (Is it any coincidence the actor's last name is also Baker?!!)

WILL: Sorry to be loading up on you-- but the client should be here in an hour.

WILL: I love the reaction that name gets. It’s like the horses in “Young Frankenstein.”

UPDATE: Would also like to add that Will and Alicia have an exchange in this episode as well, in which Will compares the representation of Sweeney being like representing the horses Young Frankenstein, which is a Mel Brooks comedy film that parodies Frankenstein. (Colin Sweeney is a bit of a satirical character) In 2008 the film was adapted into Broadway Musical and whose cast recording was climbing the Billboard cast album charts at the same time Sweeney Todd was. In 2009 Young Frankenstein won a Tony, which is around the time the first season of The Good Wife was being written and filmed. It's no secret that TGW EPs and creators Robert and Michelle King are theater buffs, with a good chunk of The Good Wife's film actors also being stage actors too!

In addition, according to the script , the character Colin Sweeney had a different surname, Foley, which could be a pun on "folly" (Am not sure if this was changed after Baker was cast)

I don't watch the show, but based on a long tradition of meaningful names in literature dating back probably to Gilgamesh, certainly to Ancient Greece, and utilized to this day; and

Based on the evidence presented in the question; I'd posit that

It may also be worth looking into the meanings of the name Colin to see if the compound name provides deeper meaning in regards to that character's arc.

35
Why did Lisa Edelstein not return for the final season of House?
8
Wrong end to The Good wife season 4 episode 6
2
Is there a reference\nod in the line "Much more subtle"?
8
Meg having cake in the bathtub reference
3
Is the White Worm character from Solo, a reference to Bram Stoker's Lair of the White Worm?
13
What is the significance/reference of a character repeatedly hitting a piano note?
12
Is the phrase "Zowie, I'm young!" a reference?