Why the shot of the Muslim Prayer in the opening credits scene?

The scene is followed by grotesque images of zombies, violence, blood and a guy is responding to questions about this outbreak live on the news. 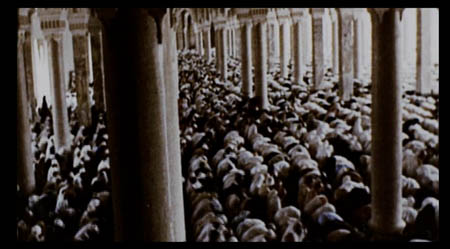 Why? Why would they put this as the 1st scene of the opening credits. It had complete audio support and nothing else interrupting it unlike the following ones, which were quick "scary" glimpses and the guy talking in the background. I'm very interested to know.

This is merely a clip of a large group of people praying. No slight was meant against Muslims. In times of crisis, people tend to turn to God. It's clear the outbreak is in full swing, and so it makes sense that any place of prayer would be crowded. I suppose they could have shown a Billy Graham revival, but then people would be asking, "Why Evangelists??" The denomination doesn't matter, the visual of a large amount of people praying is the focus. I always looked at the scene as they chose Muslims because at the time it was not as prevalent in America and indicated that zombies were a worldwide problem. Many movies have similar visuals, like disaster movies showing shots of the Taj Mahal getting leveled. It's not meant to indicate hostility towards India, just that the disaster was global and they used instantly recognizable landmarks to convey that.

I noticed this recently in a rewatch of this film. Given that editors will argue over every second in a film, I don't accept an answer of, "Doesn't matter, probably doesn't mean anything" particularly given how out of place it is thematically from the rest of the intro/montage.

A much more plausible answer is that, particularly at the time, that clip would've subtly (or not so subtly) triggered a fear/aversion response from most Americans, the same way a clip of a 1,000 Nazi soldiers saluting a Swastika in perfect unison would do.

I've seen online discussions of this where Snyder (the director) is said to be equating a zombie plague with ISIS, but I'm pretty sure that ISIS didn't exist when Dawn of the Dead was released.

According to some theories, there has been an increase of "zombie" movies since 2001. This coincides with the "War On Terror", where some theorists believe zombies are symbolic of Islam and/or Islamic terrorists who aren't as concerned with their own well-being as they are concerned with killing others not like them (i.e. infidels), or converting others to their ideology (in the fact that the zombie virus turns infected into zombies).

For the record, Zach Snyder has never (to my knowledge or exhaustive search) indicated that this was the intent of his remake, and as we all certainly know George Romero's original symbolism was aimed at mindless consumerism. However, enough people have commented here about Islamophobia so that this view at least deserves some attention. And, Zach Snyder has, on multiple occasions, stated that "A good zombie movie has to have social commentary in it", so it's completely possible that, given it was released 3 years after 9/11, that was his social commentary.

For a few links where people believe this was a direct connection to Islamophobia, see:

American society, it is not at the forefront of its subconscious, nor is it what gives Snyder’s remake its terrifying appeal. By reinventing Romero’s zombie as a fast-moving, highly dangerous and contagious organism, Snyder has embodied the media’s portrayal of fanatical Islamic terrorist organizations such as Al Qaeda and ISIS in the zombie. When re-analyzing Zach Snyder’s Dawn of the Dead (2004) with its socio-political backdrop firmly in the mind of its audience, the relevance of the film’s bizarre title sequence becomes disconcertingly clear: Snyder’s zombie is a manifestation of radical Islam.

In Western historiography, there is an established pattern of viewing Islam and Muslim culture much as we view zombies today. This discourse has many stages and contributors that can be traced to orientalist writings of the early modern period. Its central claim is that Muslims, unlike the followers of other religions, are intellectually and spiritually deadened. The idea most clearly emerges in the paradigm of Muslim fatalism.

Not the answer you're looking for? Browse other questions tagged analysis dawn-of-the-dead-2004 .

10
Is the opening break-up scene in The Social Network intended to be humorous?
8
The 'same landscape shot' conundrum
6
Why is Nebraska shot in black & white?
4
Why was "The Big Short" shot in the comedy genre?
3
What is the significance of cigarettes in ashtray at opening and closing credits of “The Big Sleep?”
3
Why was the final shootout scene shot in a very dark violet tint?
0
Why is the movie Following (1998) shot in black & white?
4
Why is this music box given a prominent role in the credits scene?
13
Why are we shown the book "The Dunwich Horror" in the opening scenes of Aquaman?
2
What's the significance of the photo shoot in the opening credits?