In “A View To A Kill” why does Zorin let Bond sleep with May Day?

There's a scene in "A View To A Kill" where Bond is snooping around Zorin's property and sets off an alarm. Bond escapes by waiting in May Day's bed for her to return to her room, and then acting like he was there all along.

The scene ends with May Day jumping in bed with Bond to do the wild thing, and Zorin -- who seemed to be May Day's boyfriend -- just kind of walking away and being cool with it. 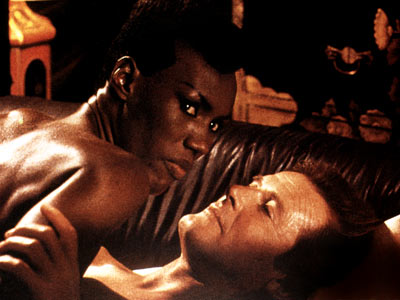 Why did Zorin so casually allow Bond to sleep with May Day? Part of Zorin's weird personality? Testament to Bond's sex appeal? Commentary on the promiscuous 1980s? Or something else?

I'd really attribute it in part to his personality. In the end he didn't really care for MayDay apart from being his assistant, training partner, and sex toy. But in the same way he trusts her as his loyal assistant to not make more of her little adventure with Bond either. So seeing her sleep with Bond won't do him any harm. There may be some good old childish jealousy in Zorin, but he's controlled and psychotic enough to hide it, since he knows (or thinks to know) Bond will get his punishment sooner or later, anyway.

And in the end it may help to distract Bond or gain some information from him. Well ok, it's Bond and he won't fall in love with her or tell any mission-sensitive information. But on the other hand Zorin doesn't have anything to loose and while Bond has fun with MayDay he won't run around spying for secrets.