Why did Arya not kill the Lannister soldiers she encountered in the Riverlands?

Ed Sheeran's character in the episode in Game of Thrones was a Lannister soldier. The rest of the soldiers were Lannister soldiers also. Arya Stark hates Lannisters the most for what they have caused to her family. Why does she not feel the need to kill these soldiers when she has the upper hand? (following my lead?)

Arya's action (or lack of) was to humanize her character. It's to show she still has a soft side. She hasn't reach Cersei's level of crazy yet.

At this point in time, Arya had just wiped out the entire Frey Family, leaving only the women behind. Now, killing these harmless soldiers would have no point. They offered Arya food, and also told her their situation: they had no choice but to serve the Lannisters.

Not everyone who serves the Lannisters is evil, that's what Arya got from her conversation with the soldiers. That's the point of that scene, both humanizing the soldiers and to show that the soft side of Arya is not lost, yet.

The scene does do a wonderful job of showing us that Lannisters (or those serving them) are not all bad people. However, I think the true reason Arya does not kill them is because they extended her Guest Right.

Arya had just killed all the Frey's, not just for killing her family, but explicitly killing her family after they had been offered Guest Right. Part of the way Arya kills Walder Frey is foreshadowed in Season 3 Episode 10 when Bran tells the story of the Rat Cook. Killing those who are under the protection of Guest Right is unforgivable by the gods.

When Arya comes along the soldiers they twice offer her food and twice she denies it (formal guest right is offering your guest bread and salt, but it can be any shared food or drink). Reluctantly she accepts after she realizes that the soldiers are not a true threat (she sees none of them are armed). She even tempts the solider to attack her by saying "I am going to kill the Queen" Once she accepts the food she has accepted their Guest Right, and as the one solider says "Be kind to strangers, and they will be kind to you".

The scene did many things that include why she didn't need to kill them... So this just is marginally related to better understand the whole nature of the scene and why it would be written the way it is.

"Hands of Gold is the song sung by Lannister soldiers that Arya Stark comes across while traveling through the Riverlands. According to the soldiers, it is a new song as Arya has not heard it before."

O'er the wynds and the steps and the cobbles,

He rode to a woman's sigh.

For she was his secret treasure,

She was his shame and his bliss.

And a chain and a keep are nothing,

Compared to a woman's kiss.

Great answers here, but something left out: Arya did challenge them.

I am going to kill Cersei.

Had they attempted to seize Arya, then they would have been killed and added to the body count. Instead they laughed and lived to laugh another day.

Eight soldiers? Are you crazy? :-) Aye, Arya is a badass, but lets be realistic. She wouldn't stand a chance to fight eight armored Lannister soldiers*. You can see on her she's a bit wary to accept the invitation to their fire and hare - and for a good reason. 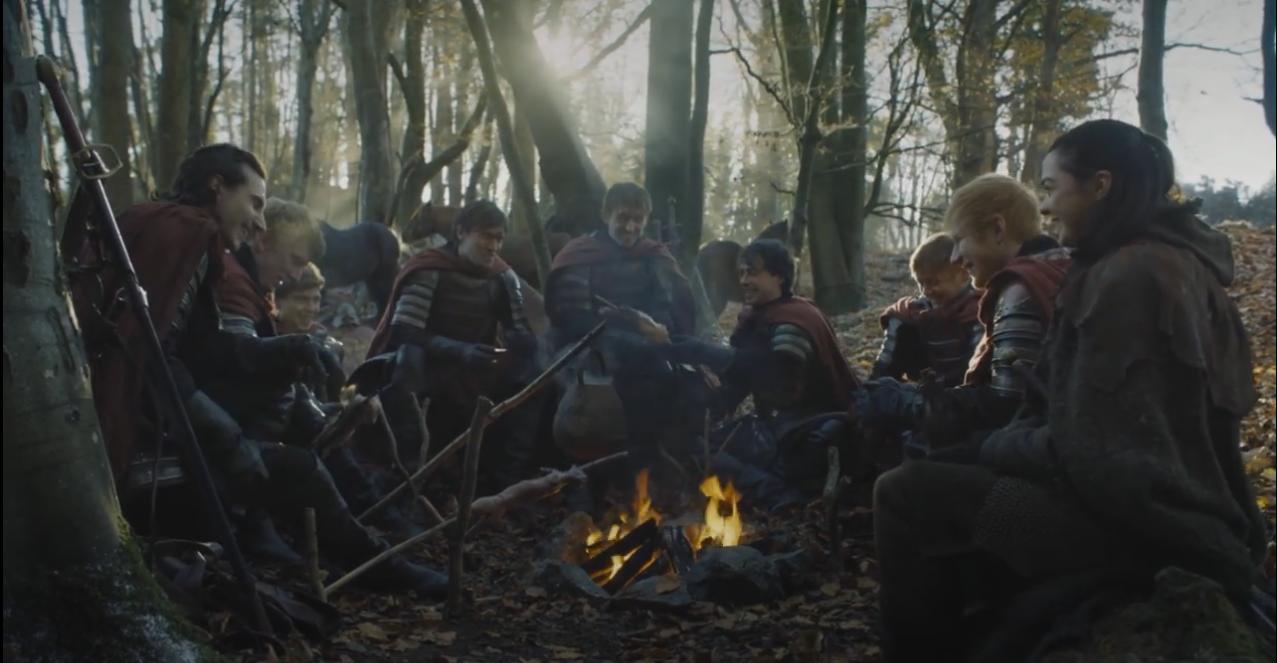 Better question would be, why those soldiers never asked her who she is? They almost seemed to be unrealistically nice and gullible for Lannister soldiers, telling her about their bussiness without knowing who she is.

Also, why those soldiers haven't been looking for the Frey's assassin? Especially when they must have known from the survivor Freys' wife it was Arya Stark and her description. I'd expect them to be suspecting strangers like Arya and subject them to an intense questioning. So, this is the part which seems a bit troublesome for me in this scene.

Anyways, this scene shows very nicely that the ordinary soldiers were just nice people, even if their army has been responsible for really nasty things.

*) Brienne had difficulties to fight four Bolton men when she saved Sansa, and she had help of Pod and Theon. Even Hound was struggling to fight five men. Yeah these boys were probably not so experienced, but doesn't matter, eight is simply too much :)
Share
Improve this answer
edited Sep 26, 2020 at 15:15
answered Sep 26, 2020 at 15:03

24
Why did Arya Stark lose her vision?
18
Why does Cersei say that she killed her husband?
33
How does Eddard Stark know that Bran saw Cersei and Jaime together?
9
Qyburn's original intentions!
14
Why is Bran hiding details from the other Starks?
31
Why does Peter Dinklage's name appear first in the opening credits?
5
Why did the Lord of Winterfell execute the deserter of the Night's Watch
59
Why is Arya visibly scared in the library in Game of Thrones S8E3?
8
Does Bran still consider himself part of the Stark family?