Significance of the number 142 in the name of Valkyrie's Sakaar name?

In Thor: Ragnarok, Valkyrie was referred to as Scrapper 142 and was Grandmaster's primary warrior. But that digit 142 in her Sakaar name doesn't seem random. Is it some reference or Easter egg? Or am I just over-thinking?

In the issue Incredible Hulk #142, we find the first appearance of Valkyire. So, yes, you are right about this being an easter-egg. 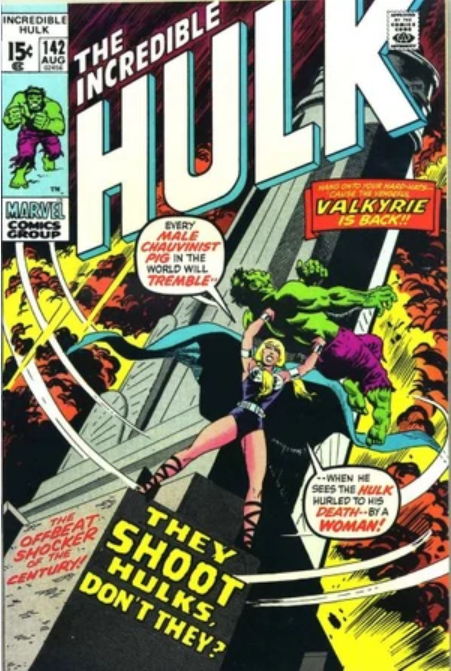 As the question has been raised about the first appearance based on some statement on Wikipedia,

The character first appeared in The Avengers #83 (December 1970) and has become a mainstay of the superhero team known as the Defenders,

Suddenly, Valkyrie knocks out all her comrades and reveals that she is really the Enchantress in disguise. She explains that after her last failed attempt at taking over Asgard failed (in Hulk #102) she and the Executioner were banished to a barren neither world. There, the Executioner abandoned her for the a mysterious woman who appeared to offer the Executioner her love. Feeling betrayed, the Enchantress vowed revenge on all men and used the Valkyrie disguise and the formation of the Liberators to met this end.

It is evident that Enchantress impersonates Valkyrie.

15
How did Napoleon Wilson come to his name?
7
What was with the beggar in Mr Nobody?
15
A possible Donnie Darko reference to 2002
3
Did Young Justice purposely reference The Bourne series?
45
Why do the Avengers have bad radio discipline?
6
Meaning of Scrapper 142's words to Thor
4
How did Banner survive on Sakaar?
31
How did Odin know about the Infinity Gauntlet?
9
How did Janet Van Dyne survive in the Quantum Realm?