Why make replicants so hard to detect?

Are there any reasons that Tyrell/Wallace would make replicants indistinguishable from humans? I can understand that they want to imitate the human form, but it seems extremely impractical to make replicants impossible to identify without extensive testing.

Blade Runners are special police units that are used to track down and retire rogue replicants, some of which hide among the public. Their jobs would probably be much easier if they were looking for replicants with bright blue skin or purple irises that would be obvious to the people around them. We know that the technology exists to alter fabricated life forms from their original, so why not utilise that for the purpose of differentiating replicants from humans? I think the movies would lose some thematic strength if the replicants were distinguishable from humans and incapable of hiding in plain sight like us, but I can't remember any in-universe reasons for this.

This seems to make even less sense in 2049, as rogue replicants have already caused serious problems and still need to be tracked down. While Wallace's replicants are supposedly incapable of disobeying when they're at baseline, we know that it's possible for the replicants to escape and it would seem that the authorities are aware too by the need for baseline testing. The people that K encounters make it abundantly clear that everyone knows he's a "skinjob" anyways, so why not make it impossible for people to not recognize replicants?

As pointed out in the comments. The human aesthetic was mandatory to Tyrell's vision of "More human than human" and his God/Creator complex. Creating anything else wouldn't be human enough.

Depending if you follow easter eggs and if you believe that Weyland-Yutani and Tyrell are in the same cinematic Universe and not just referenced for kicks within each others specific films, Then it's clearly written in the Prometheus blu-ray easter egg: 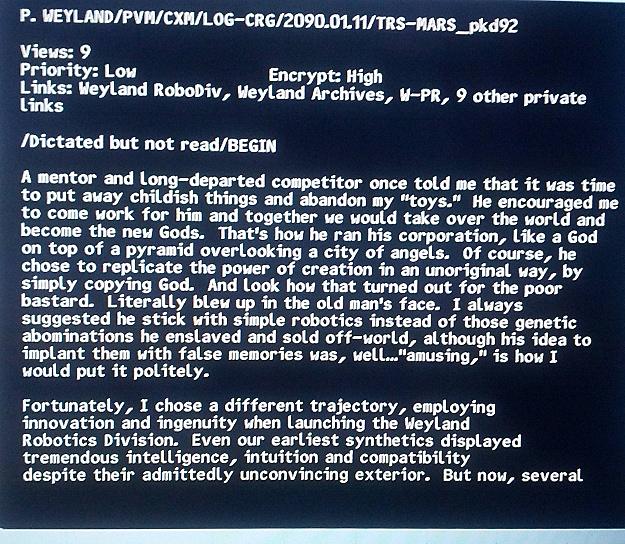 18
Why did Blade Runner deviate from the source novel so significantly?
0
Must Wallace's replicants obey?
4
Are glowing eyes of Replicants only meant for audience?
1
What is Wallace's true motivation?
4
Why are the freedom fighters fighting against Wallace?
2
Why don't replicants have emotions?
4
Why has nobody looted or settled Las Vegas?
3
Were the "friends" of Sebastian essentially small replicants or were they something else?
3
Are Nexus 6 models nearly impervious to the Voight-Kampff test, or very easy to spot?