As indicated in the movies, Tony Stark is a "Genius billionaire playboy philanthropist", with no background in combat training. In the comics and cartoon series it has been shown that Tony was trained under Steve Rogers, and a few others, to learn how to fight. He is a genius, great inventor but in the cinematic universe there was no such indication that he ever learned to fight or defend, other than his suit of armor.

But in Captain America: Civil War (2016) we can see that Tony can fight. When Bucky went rogue, Natasha, Sharon Carter, Tony and T'challa attack him. It shows that although Tony only hand armor on his hand, he actually knew how to fight and defend. His fighting style is somewhat similar to mixed martial arts, but I'm not so sure about that.

...no such indication that he ever learned to fight or defend...

Are you sure? Iron Man 2 features a protracted sequence wherein Tony is doing just that. 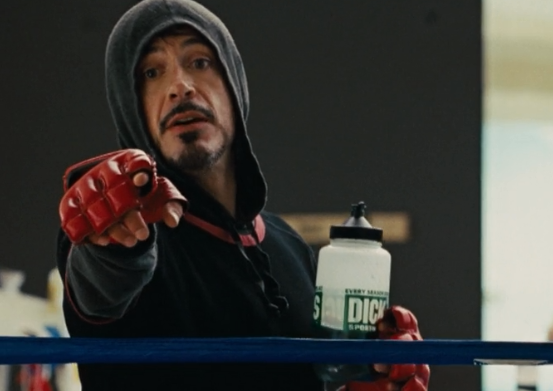 When did Tony learn to fight?

After the events of Iron Man, he began training in martial arts. By the time we get to Iron Man 3, we see that Tony seems to be practicing at least Wing Chun, as he interacts with a Wing Chun wooden dummy in his lab.

In Iron Man 2, we see him sparing with Happy Hogan.

After that is anyone's guess. It does not appear that Steve Rogers and Tony Stark spend a lot of their downtime together, so I would be surprised if that were the case. In both Iron Man 2 and Iron Man 3, Tony's primary residence is still Malibu. And, if he regularly trained with Steve Rogers, he probably would have been a little better prepared for their showdown in Civil War.

I believe that it's safe to assume that Tony has had significant off-screen combat training since well before Iron Man 1. There is significant evidence in the movies to support this.

In Iron Man 1, after he creates the prototype, he's able to clear the cave (or at least his route), achieve a tactical goal, and bug out. This wasn't easy, and someone without training most likely wouldn't have been able to do this as aptly as he did. Also, just having armor with weapons attached to it doesn't make you good at using said weapons. You have to have training in order to know when to use certain weapons and how to use them. Tony demonstrates this through all the movies he's in.

In Iron Man 3, Tony is more than proficient with normal firearms and even home-made weapons/tools when he is without his armor.

In Captain America - Civil War, we really get to see the extent of Tony's hand to hand combat, with him fighting both Steve Rogers and Bucky. He's not that great, as he relies on his armor to take a lot of hits for him. But, because he knows how to use his armor, he is able to take over the fight in several occasions.

Some time between the end of Iron Man and the beginning of Iron Man 2, Tony began learning to fight.

In Iron Man 2, Tony is shown sneaking in an MMA move during a boxing session with Happy.

HAPPY: What the hell was that?

TONY: It's called mixed martial arts. It's been around for three weeks.

HAPPY: It's called dirty boxing. There's nothing new about it.

Notice that Tony mentioned he'd been learning MMA for only three weeks at that point. Given this statement, and that only six months stands between the events of I.M. and I.M. 2, Tony most likely had begun learning to fight just a few months prior to the events of Iron Man 2, not too long after Iron Man.

Tony is never shown learning any combat skills/techniques from anyone, nor has it been hinted at at any point in the films so far.

In fact, as far as the boxing/sparring scene goes in Iron Man 2, there's really no indication that Happy was teaching Tony anything. Instead, it perhaps seems that Tony was taking lessons elsewhere, and then trying his newly learned moves out on Happy.

With Tony Stark being as wealthy as he is, it wouldn't surprise me the least if he had just hired a professional to give him lessons at his own convenience.

His fighting style is somewhat similar to mixed martial arts, but I'm not so sure about that.

Not the answer you're looking for? Browse other questions tagged character marvel-cinematic-universe captain-america-civil-war iron-man .