Can you hurt upside down faceless monsters without magic at all?

In the first season of Stranger Things, we can see the "Demogorgon" being set on fire and shot by automatic weapons, without showing any signs of harm at all.

You can see that he looks pretty healthy after Eleven pins him up the whiteboard: 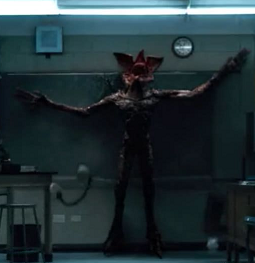 In the second season, similar creatures are featured. They again do not seem to mind bullets from automatic weapons.

Can those monsters be killed by physical means?

Both the (presumably) fully grown demogorgon in the first season and the "demo-dogs" in the second season appeared to be physically harmed by things other than Eleven's telekinetic powers (what the question calls "magic").

In season one, Nancy and Jonathan seem to be able to hurt the Demogorgon using fire and other weapons, forcing it to retreat to the Upside Down. In season two, the demo-dogs are shown to be affected by gunshots, especially at the end of the last episode when Eleven is attempting to close the gate.

However, in all cases they appear to be highly resilient (a few gun shots aren't sufficient to do serious damage), and may even have rapid regeneration abilities (in or outside of the Upside Down). We also don't know if it's possible to fatally wound any of them as that's never been explicitly shown.

Although I think the story seems to be set up with a kind of X-Men-like narrative, where it seems like the metaphysical characters are a fundamental part of dealing with the metaphysical creatures of the Upside Down, I would argue that both the human characters without abilities are still important and that we have seen some non metaphysical ideas play a role.

2
Does the Mind Flayer return to the Upside Down world?