In Blade Runner 2049, what was going on in this scene?

This is after Officer K had lost Joi. He walks on a catwalk (or a crane, not really sure) to get a better view of a giant, pink hologram of a nude Joi.

In this scene, the fake Joi sits down, and looks at the clearly traumatized K with a smile, accompanied by her catch phrase: "How's the day?" Furthermore, she calls K "Joe", which had me the most confused. Did she recognize him? If so how?

To repeat my question: What is happening in this scene?

Throughout the film we can see several advertisements of the "Joi" product: an AI that you can buy and customize. She appears with different costumes and details.

In the market scene, when K is looking at the picture of the tree and is approached by the 3 prostitutes, a version of Joi with a japanese schoolgirl outfit can be seen. Just after K's "sex" scene we can see in detail one of these advertisements with the lettering "Anything you want to see, to hear..."

During the scene in the bridge, the Joi that is talking with K is a placeholder, an empty one that can be customized after purchase, symbolized by the empty black eyes. Her referencing him as "Joe" is just as an expression in English to talk about an arbitrary man, like in "John Doe", or "He's just a regular Joe", or "This is not easy to the average Joe". But, of course, it strikes a nerve in K, because of the personal significance of the name his Joi gave him.

Now, to speculate a bit, K's Joi choice of "Joe" as a name, albeit very personal to them, might not be so random, but a byproduct of her programming. This could be a hint to the artificiality of K's life, in having a relationship with a disembodied AI, rather than a human or another replicant, because of the immaterial aspect of their past (memories are only implants, "Joi"s don't even have implanted memories). Coming from just realizing that he is not the born person he and Joi hoped he was, added with the pain of being reminded of his relationship with his Joi, he could also be perceiving an emptiness in his own life, like this empty Joi in front of him. 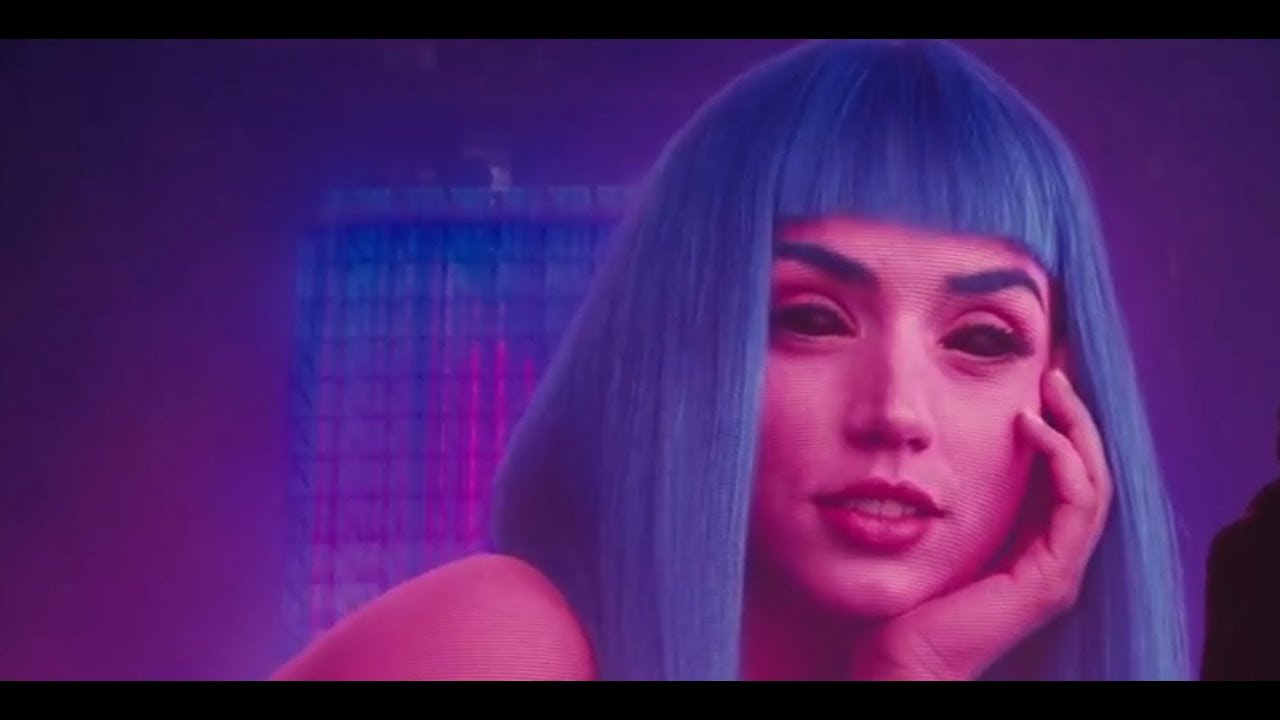 Only now (to give a contrasting view with previous answer) he has the opportunity to give real meaning to his life by saving the disenfranchised replicants; and even more later, doing the same for Deckard and Stelline, by reconnecting father and daughter and giving them both a chance to be a family, in a way he could never have had.

No, she doesn't recognize him, and it's not the same Joi, except in appearance.

In BR2049, my literal interpretation of the character "Joi" is that she exists entirely in software. Her physical appearance is not unique to K's apartment. Rather, it was designed, copied, and duplicated to many other products and services, just like a modern day "stock photo girl". One of those places is the billboard on the side of the gentleman's club.

In this imagined future of targeted advertisement, cameras and sensors detect a man walking along on a bridge at night. Projectors cast the holographic "billboard Joi" to lean down, grab his attention, and attempt to coax him into the building.

But why does she call him Joe? I can only speculate, but perhaps there is some shared code between "billboard Joi" and K's "Joi" in the department of choosing nicknames for men.

the advertisement bearing the likeness of his lost love is too much pain to bear. K is contemplating suicide. He's standing on a bridge and looking at his weapon. That's when the voiceover of Freya talking about fighting for a purpose plays back in his mind, and that's when he decides to try to save Deckard.

The Joi that K falls in love with is an interactive AI holographic program. While the interactions with K shape the AI's program, uniquely, she is, originally, a purchased product. Her appearance, while probably one of many, is a standard template.

The image he sees later is a sales hologram. Basically, a commercial.

Referring to him as "Joe," when it's not his name, is not surprising. If it's basically the same version of the same program that came up with "Joe" as a default name when there wasn't an actual one to use, why wouldn't a relatively identical AI use that same default?

Why "Joe?" It struck me, personally, as playing on a stereotype. Far eastern cultures play a prominent role in the mixed-culture of the future. You see a lot of Japanese imagery and letters on signs, you hear some Chinese language mixed in, you see Korean letters on some of the buildings and some limited use of Korean language in the original Blade Runner movie at the noodle bar. When you see a lot of movies where Asians have limited English skills, they often refer to Americans as "Joe" - whether as short for "GI Joe" - the US military in WWII and Korean wars, or, if memory serves, that's what Short Round said all the time in Indiana Jones and the Temple of Doom. I'm probably wrong on this, but I took it to be the Asian-influenced default for addressing people who seem primarily American.

Joe can simply be short for Working Joe, a name more generic than even Tom, Dick, or Harry. Also it sounds like "Joi". Not a crazy placeholder title for an AI to call a man.

I just saw the movie. The way I remember this scene, she didn't call him "Joe". That would make no sense, as this is a giant outdoors advertising instance of Joi... it has no connection with him and it's interacting with him in advertising mode. She said "You look like a good Joe." The phrase "a good Joe" is a common idiom that simply means "a good person".

His personal instance of the Joi software program, which knew him and seemingly truly loved him, was destroyed. The giant ad didn't know him.

EDIT: I just checked and now I was able to find the exact scene on YouTube. I was absolutely correct: the giant advertising instance of Joi says "You look like a good Joe." Check for yourself.