Why are English, Russian and Japanese cultures emphasized in the Blade Runner 2049 world?

In Blade Runner 2049 I can see symbols/letters of English, Russian and Japanese (sorry for the simplification but I've just seen Cyrillic and Japanese looking glyphs). I can hear those languages in the background (where the action of the movie is located in a kind of USA).

Is this important that those 3 are emphasized? I'm getting the feeling that in Blade Runner's world there are no countries/borders anymore.

When Philip K. Dick wrote the novel that the first Blade Runner movie was based on, he had predicted that there will be three main powers: USA, CCCP and Japan.

USA and Soviet Russia were in the middle of Cold War and in the time of publishing of the novel everything in the world revolved around those two countries.

But at the same time Japan was the source and pinnacle of technological revolution. Japan made microchips, they thought they were at the cusp of creating human-like robots.

So Dick concluded that in the future, after third World War (which would be a world war world because it would take place in the whole world but only USA and CCCP would participate through NATO and Warsaw Pact) those three would survive.

As mentioned in the comment below CCCP is (was) USSR but in the movie we see "Product of CCCP" and not, as should be proper in English "USSR". So the ad must be targeted to Russians. 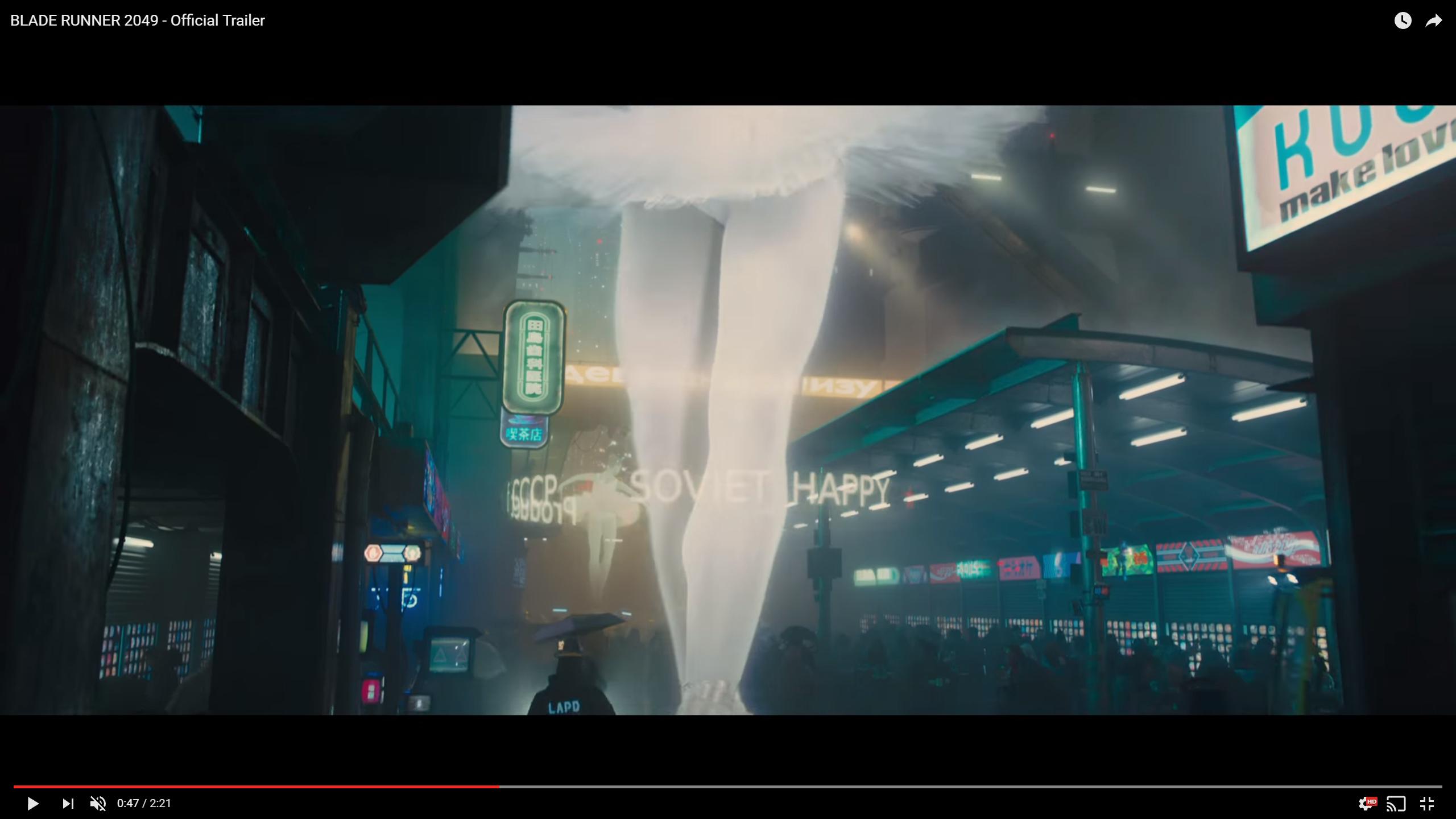 That's why it's funny that Key car is a Peugeot. Because that messes with all world settings.

It's in part to do with the fact that there are only a few Megalopolis' left and that Phillip K Dick intended Russia to be a major power in the future.

The only piece of information I can find on this topic for now is that the Director, Denis Villeneuve, has recently stated in a recent interview with Josh Rottenberg (Los Angeles Times):

Part of L.A. is in ruins and doesn’t have power anymore, and there are a lot of refugees coming from eastern Asia and Russia
-Los Angeles Times, 2017-09-01, Denis Villeneuve explains how 'Blade Runner 2049' is no replicant of the original neo-noir sci-fi fan favorite, by Josh Rottenberg

Basically, the world is either too spoiled to live in or has lost its desirability in comparison with the unseen 'Off World' locations. Given that, many people have migrated to the remaining Megalopolis' left, one if which being Los Angeles.

The other thing is that in the original novel, Do Androids Dream of Electric Sheep? - which the Blade Runner series is loosely based off, the author, Phillip K. Dick originally intended Russia to have overtaken as a major power or influence in the world, as director Denis Villeneuve stated in a recent interview with Nash Jenkins (Time):

Nash: How do you update a vision of the future from 35 years ago?
...
Denis: I went back to all the cultural references of the first movie and imagined how they would evolve in the future. And then I went back to the Philip K. Dick novel and explored the geopolitics of the book. In the book, the U.S.S.R. was still present. I thought that it would be interesting to think — what if the U.S.S.R was still alive? What if it was as strong a cultural and economic force as the U.S., but with different political laws? You see McDonald’s in Moscow. What if you saw Russian products in the streets of Los Angeles? I thought that would create an interesting distorted reality that would tell my audience right from the start that they’re in a different world with different laws from a geopolitical point of view.
-Time, 2017-10-03, 'Director Denis Villeneuve Proved to Us He Loves Blade Runner More Than Anybody', by Nash Jenkins

Although the main writers Blade Runner and Blade Runner 2049, Hampton Fancher and David Green have mentioned that the story is not all that related, it's still conceivable that this feature of the world is hungover from Dick's story:

Scott Huver: How much of an influence was Philip K. Dick in the process?
Green: I hope I won’t disappoint to many by saying very little. There are a lot of science fiction writers I love. I have a hard time accessing Do Androids Dream [of Electric Sheep?] specifically, and some of his other novels as well. I think the prose is beautiful, the ideas are amazing, but it’s one of those things that I always read intellectually instead of being able to experience emotionally.
...
Fancher: Well it was one idea. I was looking for a vehicle, and it was rather cold-blooded on my part. Because that’s what I’d been lacking in everything I’d been trying. I didn’t have through lines. I didn’t have McGuffins. I didn’t have plots, and I was Antonini all the way. It was like, “That’s my way into wherever the gold is.” It was that one thing, and that’s all, and the idea that science fiction was going to become popular in the near future. And so I didn’t have any love of Dick at all. I was never a fan.

This is why there are a lot of visual indications of the USSR being present in the world, but not a lot of story to go with it

It's safe to assume that the government is not under Soviet control as we see no evidence thereof. However, I'd urge you to ask yourself: "In that world where everyone lives in the same place, homogeneously, how do you define 'Soviet'?"

Again, there's not much evidence towards which languages are spoken, officially. We see a few examples though:

PKD lived in California all his life, and his settings largely resemble the Cold War state he saw around him. As in the Man in the High Castle, Dick often imagined the future world in California as influenced by the major WW2 powers closest to California, i.e. Japan and Russia. In his view, the West Coast of the US was more in the Eastern/Oriental sphere while the East Coast was more in the Western/European sphere. I'm not sure there's a definite answer as to why those 'glyphs' were used in the movie, but generally PKD had such preconceptions.