Why are they called Blade Runners? What does it mean?

In Blade Runner (1982) and Blade Runner 2049 (2017), the special police task force who hunt down and kill replicants are called Blade Runners, just like the movie title.

It's a cool name, but they don't use blades, nor do the replicants they go up against necessarily use blades (though knife attacks do happen).

It isn't immediately obvious why they're given this name. What's the meaning behind it? Is it ever explained in the movie(s)?

What does Blade Runner mean?

The world of the Blade Runner films is based on the Philip K. Dick novel Do Androids Dream of Electric Sheep? (1968).

However, the name 'Blade Runner' was taken from a different book called The Bladerunner (1974) by Alan E. Nourse, in which the term "bladerunner" (one word) is used to describe black market suppliers and transporters of medical equipment, and the name comes from the scalpel blade, and other instruments of incision, being typical items they'd sell or transport, and running in the sense of smuggling, which can sometimes involve literal running, but more often than not refers to trading routes, figuratively "runs".

As you can see, the aforementioned scalpel makes an iconographic feature on the cover of the book, as well as a man running, so that the titular Bladerunner is literally displayed. 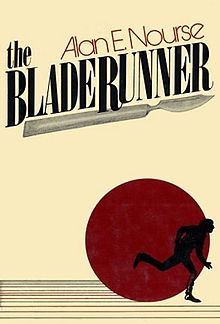 What does this have to do with Ridley Scott's Blade Runner (1982)?

There is some more history involving title changes, other authors and other books and attempted film productions that I won't go into, but you can read about here.

Suffice to say that a book called Blade Runner: A Movie found its way into the screenplay writer for Blade Runner (1982) Hampton Fancher's personal library, when he and Ridley Scott were adapting Do Androids Dream of Electric Sheep?.

Ridley asked what Deckard's profession was, and Hampton quickly, after flicking through his books, came up with "Blade Runner", and Ridley liked it.

“Ridley, after a few months of us working on a draft, when he first came into the project, asked me a question that was so obvious I hadn’t really addressed it before,” Fancher tells me. “What is it that Deckard is, professionally? ‘He’s a detective,’ I said. ‘Well, that was obvious, but what kind of detective exactly, what should he be called?’ I didn’t have an answer, but I’d better get one fast.”

He turned to his collection of tomes. Per Fancher: “That night, I was looking through my books and came across a thin little volume by William Burroughs called Blade Runner. Bingo! Everybody liked it, then later, we needed a new title other than the ones we’d been considering and Michael Deeley, the producer, said, ‘It’s staring us right in the face.’”

—"Digging Into the Odd History of Blade Runner’s Title", Vulture.com

Not the answer you're looking for? Browse other questions tagged blade-runner blade-runner-2049 .