Why weren't the police cars in their official colors?

Recently I watched the movie The Hitman's Bodyguard (2017) and was intrigued by the location setting in Europe and especially Amsterdam.

What I noticed as a local was that the pattern used on the police vehicles that were in the movie are not similar to the official car pattern used by the Dutch police. 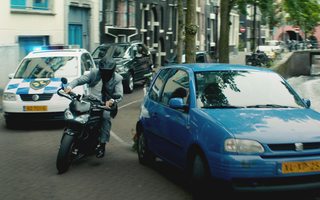 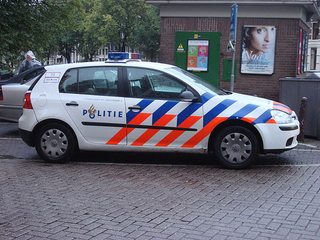 Image via Wikipedia, made by Oxyman, consulted on October 8th, 2017

I assume they wanted the movie to be as authentic as it could be. Why was the pattern then off? Didn't the Dutch police give permission to use their pattern? What was the reason for this?

40
Why do movies & TV use this police radio clip over and over?
5
Why are people playing police officers not arrested?
6
Why does the Underworld team release their movies exactly with 3 years gaps?
3
Did DC officials ever acknowledge the term "Arrowverse" for their canon universe?
3
Why did Disney go with Netflix to air their Marvel's Defenders' series?
8
Why weren't actual NFL teams used?
6
Why do actors often play their last scene on a movie on their first day of filming?
4
Why astronauts aren't wearing their spacesuits on Mars in The Invisible Enemy?
5
Why did Hobbs & Shaw cut their action scene this way?
6
Why do cars in movies set in earlier eras always look brand new?