Ask Question
Asked 7 years, 3 months ago
Active 7 years, 2 months ago
Viewed 746 times
6
votes
Closed. This question is off-topic. It is not currently accepting answers.
Closed 2 years ago.
Locked. This question and its answers are locked because the question is off-topic but has historical significance. It is not currently accepting new answers or interactions.

This is my first identify this movie question.

I only saw part of the movie of the movie perhaps in 2006 or 2007 (could not recollect correctly) on the PC of my friend.

In the part it was shown:

A small girl (around 8-13 yrs age) boarded on a ship with her family. In the evening there was a ball dance going on among the passengers of the ship on the deck. The girl was standing alone finding no company. A kind old man (60-70 yrs age) appeared in front of her and proposed her to join him. The girl smiled and started dancing with him very slowly. All on a sudden, a sharp rubber band type string like thing that was almost invisibly bound across the length (or width) of the deck cut off and all the passengers on deck were cut down by it. The old man and her family, all of them was cut dead in front of her eyes. Basically they were cut on the height of their waist. As The girl was small in height, the thing passed over her head and she was not killed by it. Now the girl was alone on the ship. What would she do?

This was the part of the movie that I can remember. Cannot remember whether there was a psycho killer or not.

But the Trailer I found does not have that scene.

It is the opening scene of that movie. 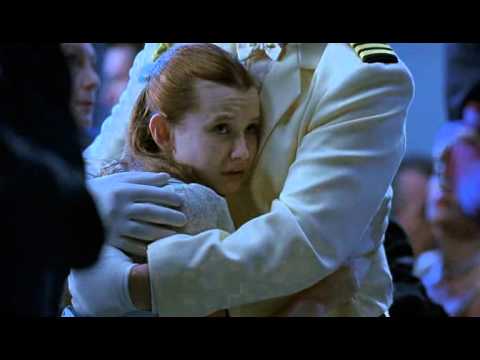 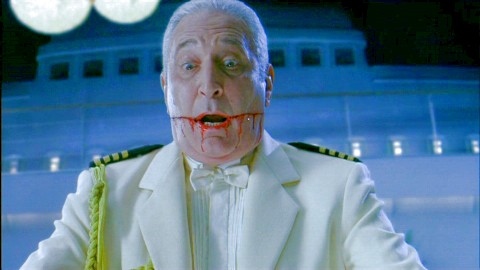 This movie is ghost ship. The scene you have mentioned is starting scene of the movie. The girl was named Katie. She was offered for a dance by the Captain of the ship. The girl survived because her height wes smaller than from where the wire passes.

The girl was killed in the later part of the movie in some other boat, whose passengers were trying to claim the gold of sunked ship.