What was the first movie depicting a bat wielding educational professional?

The tough education professional who wields a baseball bat to bring order to a troubled school has become something of a trope. I'm wondering what the first appearance was. 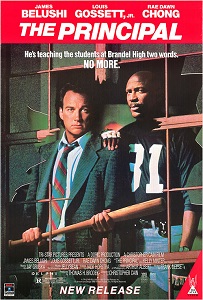 There was an 1982 exploitation film The Class of 1984 that may have set the precedent for the two subsequent films, but I can't recall if the teacher in that film used a baseball bat specifically (this movie poster suggests a lead pipe and blowtorch, but many melee weapons were employed in the movie, and the iconic nature of the baseball bat wielding educational professional had not yet been established...)

Question amended to "bat wielding" to allow for cricket bats.