My question is extremely similar to this one.

I grew up watching Star Trek: The Next Generation, thus I always took it for granted that Klingons look like this: 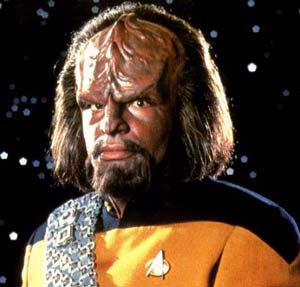 Now I'm watching the brand-new Star Trek: Discovery, and I see that Klingons like this: 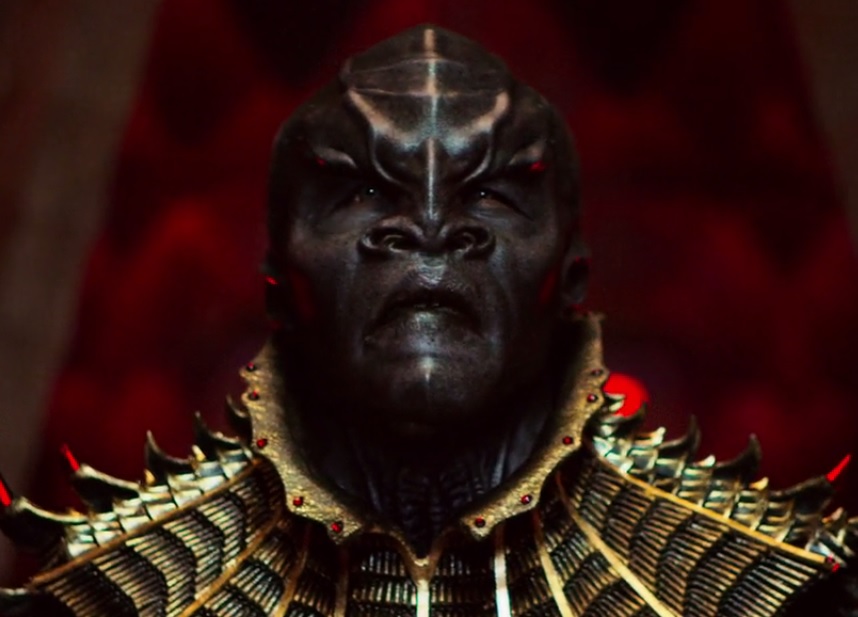 What happened? it took me a short while to grasp that they were klingons. The small ears and small nose, barely going "out of" the face, seemed a change very unnecessary.

Note: I know that nowadays the Computer Graphics technology is much more advanced, but I don't see why they would use it to change how klingons look like if they could simply leave them in the same way.

As it turns out, there are 24 Klingon Houses that exist on other Klingon Planets. And the conditions of each planet, created axioms for diverse cultures. So Star Trek: Discovery wants to explore them, as they begin to form an empire...

"The empire is very big. They don’t all grow up on Kronos. They don’t all live on the same planets and certainly those different planets would have different environments. So how would the cultures have evolved differently?…We tried to come up with cultural axioms for each house so each looks different and they bear a cultural patina like our cultures do here on Earth." https://trekmovie.com/2017/08/03/stlv17-designers-explain-why-star-trek-discovery-klingons-are-bald-and-more/

"What can you say to reassure us that we’re not losing the Klingons we know and love?” a furtive audience member asked during the Q&A portion. Mitchell assured the crowd that the recent publicity still image released was of one Klingon, from one house. “We will see all 24 houses and the leaders among them,” he revealed. The houses will be explored, and the physical and ideological differences between them. L’Rell is part of two houses, Chieffo explained, and the conflicts arising therein, as well as how she is viewed by the Federation versus her own people, will be explored in depth."http://www.treknews.net/2017/08/03/star-trek-discovery-cast-klingon-houses-stlv/ 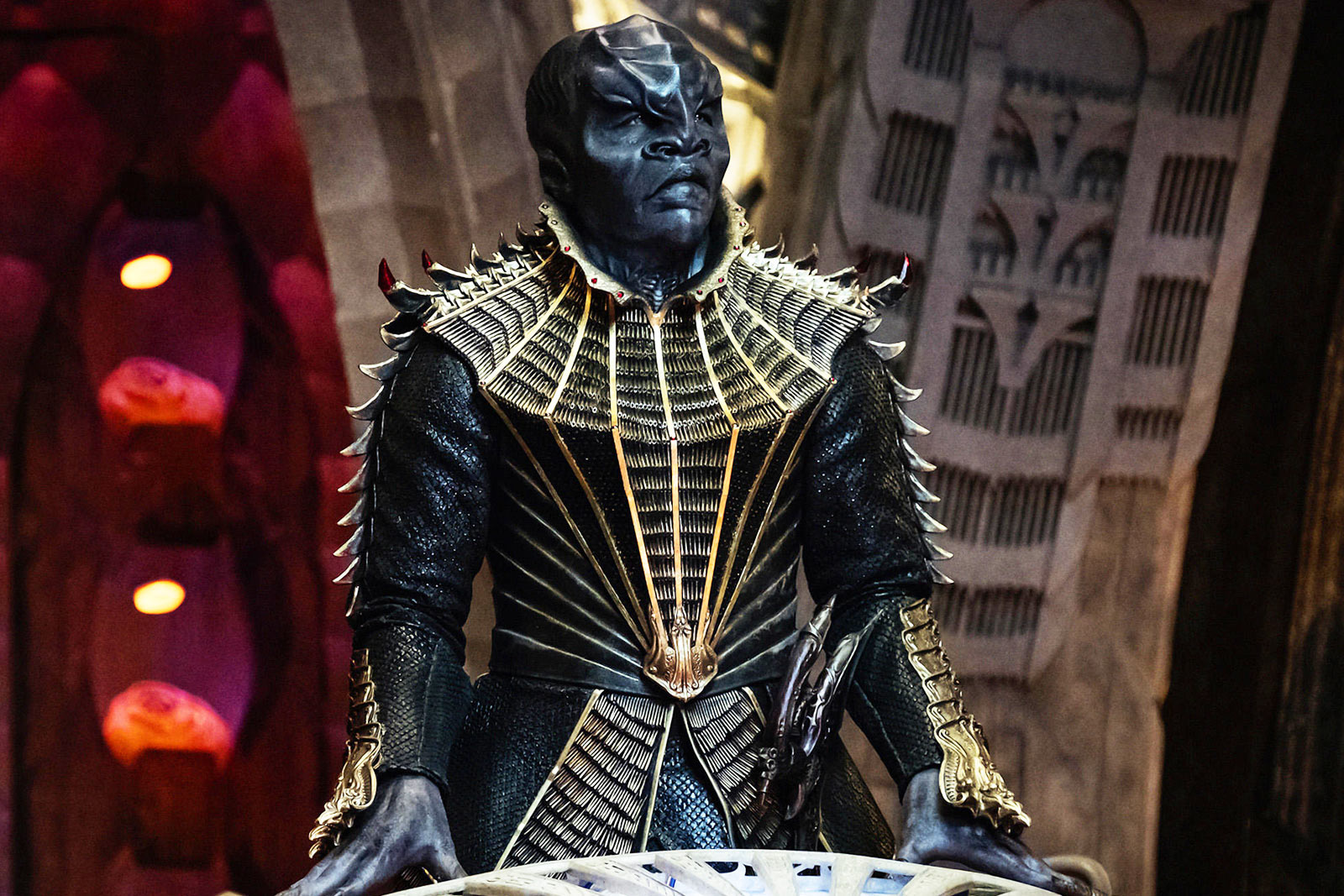 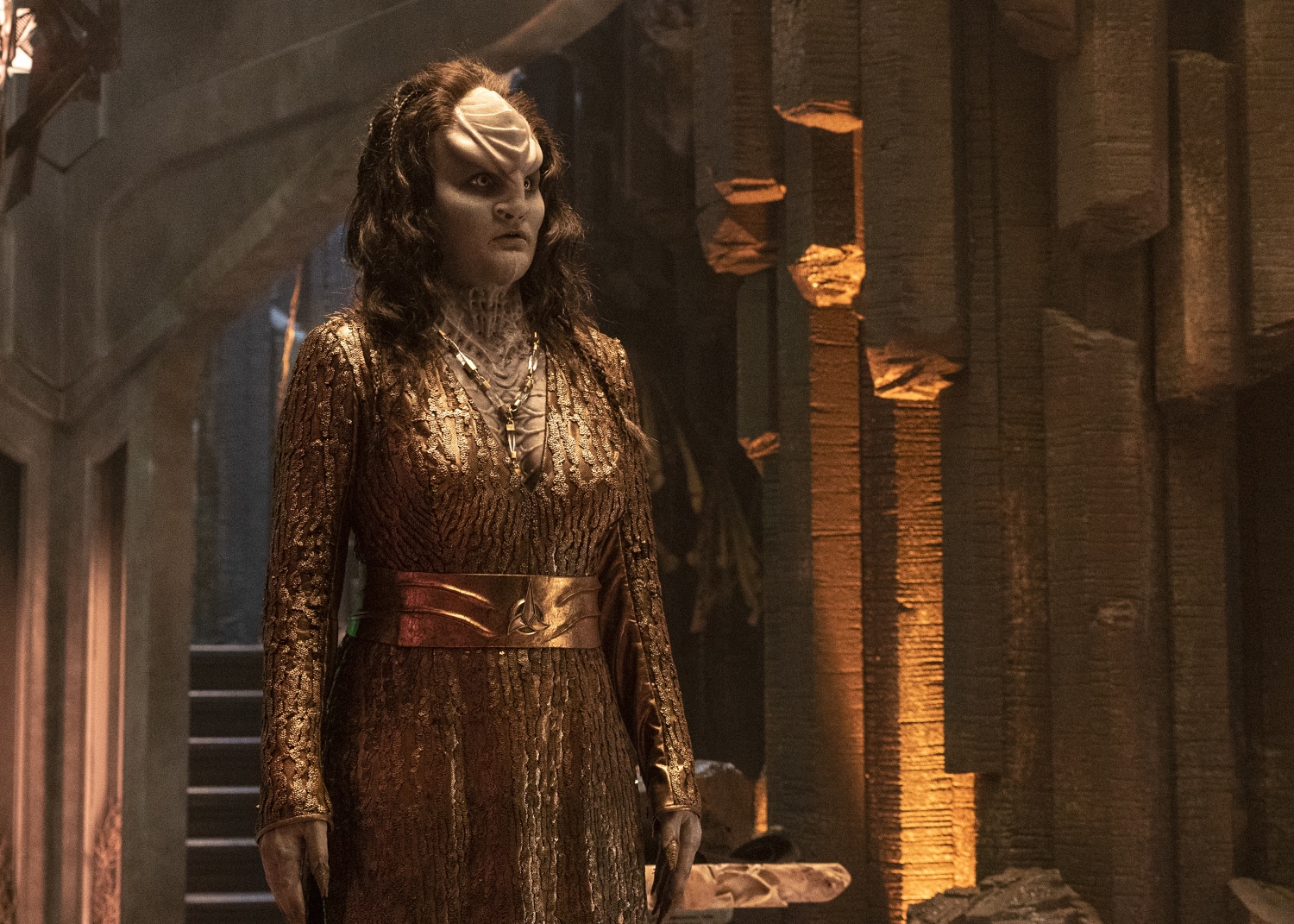 Building from an episode of TNG:

“You might have noticed in the trailer, there is a bit of a new aesthetic going on,” Chieffo said, attributing the hair to Discovery ’s makeup effects department head Glenn Hetrick. “He was inspired by Season 6, episode 23 of The Next Generation, ‘Rightful Heir.’”

In “Rightful Heir,” Lieutenant Worf feels spiritually adrift and makes a pilgrimage to the Temple of Boreth, where witnesses a miracle: the return of Kahless, the first Klingon emperor and guardian of their afterlife, prophesied to return and lead the Empire once more. Worf eventually learns this Kahless a clone created by overzealous priests. It is the Kahless clone who tells the legend that inspired the Season 2 redesign:

“I went into the mountains, all the way to the Kri’stak Volcano. I cut off a lock of my hair and thrust it into the river of molten rock which poured from the summit. The hair began to burn, but then I plunged it into the Lake of Lusor and twisted it into a sword. And after I used it to kill the tyrant Molor, I gave it a name: bat’leth, the sword of honor.”

“In the spirit of Discovery, we took that one little beautiful seed that was planted from an earlier iteration and expanded on that. We see that in a time of war, the Klingons would shave their heads and, in a time of peace, we start to grow it back out,” Chieffo said. “I really love the symbolism of that.”

And about not following suit in the Dominion War

“The Dominion War takes place more than 100 years after the events of Discovery,” she says. “Traditions change and are lost in time. Much of what T’Kuvma predicted about homogenization and assimilation of the Klingon race occurs after the explosion of Praxis & subsequent political shift.”

Chieffo’s assertion that the peace treaty fundamentally changed Klingon culture is supported by episodes like Deep Space Nine’s “Blood Oath,” in which Klingon characters like Kor, Koloth, and Kang - each introduced in the pre-Khitomer Accords era of Star Trek: The Original Series - vaguely comment on how the old Klingon ways have fallen out of favor since making peace with the Federation.

Not the answer you're looking for? Browse other questions tagged production effects star-trek star-trek-discovery .