How did the machine work in the alternate timeline?

At the end of the 3rd season, Peter had to merge the two universes, in order to fix both, and by doing that, the observers said 'he's done his purpose'.

In the beginning of 4th season, a new timeline has taken place, and everything seems to be happening without Peter like he never existed 'it's okay for now'

My question, if in the alternate timeline there was no Peter, how did the machines work? and how did they merged the two universes?

I'm talking from the new timeline perspective, where Peter wasn't saved in the lake.

It's a mystery that is never explained, but I have a theory about why it might be inconsequential or what it means...

Peter: form a bridge between the two worlds so that we could work together to heal them both. And you created it so that I was the power source. Only I could activate it, but you told me that when I did, there would be consequences.

WALTER: (shakes his head - negative) There is a machine, but I didn't build it. I don't know who you are, what your agenda is, or why you claim to be my son.PETER: So you built a machine to save us, to

My theory is that season 4+ is the time line the Observers where created in, but are now being written over.

The End of All Things - Transcript:

THE OBSERVER: A more apt question would be, 'from when?' we are you-- we're human... many generations after your lifetime. We are one of countless possible futures for humanity. Our technology has uniquely afforded us the ability to travel within and outside of time so that we may observe our beginnings...

THE OBSERVER: Had. When you made the sacrifice to step into that machine, you were not the only one who ceased to exist. So would he. I believed at the time that would be the end of it. I cannot explain, but it is clear that I was wrong. You have managed to return in physical form. I suspect... this will provide an opportunity for you to put things right. She is the one... the Olivia Dunham from whom your shared future was meant to spring. This must be, and everything will be as it was intended. You must find a way... (alarmed) they are coming.

Back to When You've Never Been - Transcript:

** ELIZABETH BISHOP: (candid) That's what got me through it, you know? I told myself that > if another universe exists -- and there's got to be more -- then > somewhere... you would grow up and be happy and... and fall in love. (bittersweet) Somewhere you would have a life... just -- just not here.

Neither Here Nor There - Transcript

THE OBSERVER: (emphatic) It is impossible. The timeline has been rewritten. He was erased. And yet traces of him continue to bleed through.

DECEMBER: It is, as it has always been, our responsibility to insure events play out, as they were intended, ---before--- your intervention. This started with you. It must be you who ends it. (hands over a small metallic bar)

The reason I believe this is because in season 5 we learn Michael was hidden in the season 1-3 "blue" timeline--meaning he "came" from this other time line. We learn later that Observers are created in the year 2167, but notice how we only ever have "one set" of the Observers with no doubles...

The Fringe comic tie-in Peter and the Machine extends and expands on the episode The Day We Died. Peter consciously time travels (Like Desmond Hume in LOST's, The Constant) to a blue 2026 that has "already" existed, while he is in the Wave Sync Device. 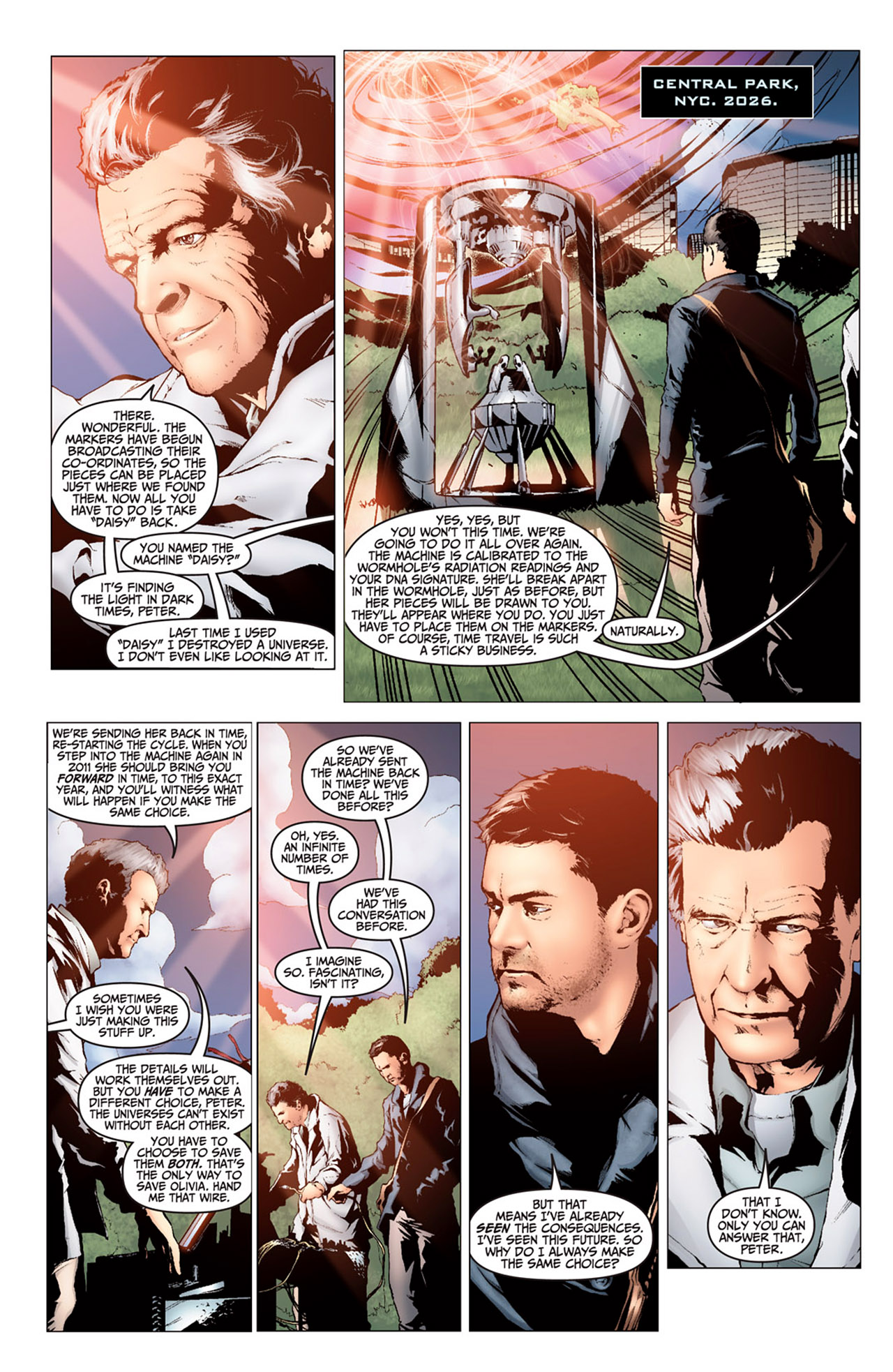 He learns that he must make a different choice than previous Peters and/or First People, so that the universes don't die again and again. But he experiences, by talking to both to September and eventually another Peter in a kind of memory-projected astral plane, what other Peters had done and why it doesn't ever work. Walter also explains that machines have been taken back in time over and over again--possibly infinite times. Peter must choose "balance" instead of one side over the other to make some kind of a difference...If the times lines/Universes always "die" @2020s-40's mark, then the Observers are never "re-created"...

The concept of this "writing over" idea is also mentioned by Walter when he explains that video tape can be re-recorded over, but underneath the original recording is still there buried. He also suggests in another season 4 episode, that he believes that "trauma" may cause ripple effects backwards in time---that could also be a way a timeline would get re-written and why the season 1-3 timelines essentially "reprint" on top of this one, why September seemingly tries to "change" what he thinks the past was (by warning Olivia) and realizes that he himself does not have all the answers, and could provide a more specific reason why the Observers would choose to occupy 2015+.

It would seem likley that, as a redemption story that is banking on "Spiritual Progress" ---> Walter must redeem himself through establishing a real-loving relationship with Peter, leading not only to the survival of the universe, but of [blue] Olivia-furthered by a time where she becomes a mother, and where her child gets to grow up in a "normal" world ---> that the story would have to full-circle a time line that IS equally important to the origins/survival of the Observers and where 'Peter and the Machine(s)' is the catch 22 on some cycle cosmology.

WALTER: Belly and I always had a theory that some traumatic events echo backward in time. (animated) Put simply, some future events ripple backwards. Well, not in a way that we're consciously aware of, but it's sort of like vibrations. And perhaps your brain is uniquely sensitive to these vibrations. So it's possible that's the hum that you hear. Have you ever been able to control this ability?

A Short Story About Love - Transcript:

THE OBSERVER: You have been home all along.

PETER: I don't understand. I was erased.

So if my theory is true, then we have to assume that in the timeline of the Observers creation (which in part could be what season 4/5 is), that the machines were somehow originally created without Peter interface technology. The interface could of been a variation that was preventing spiritual progress and was used as a kind "back-door" solution to some original problem (like perhaps, stopping the Observers is not mutually exclusive to this particular Walter, but also "original" people of the season 4 & 5 timelines, before it gets altered?).

6:02 AM - Transcript:
NINA SHARP: There's a man that William knew. I'm not sure where they met. But he had great confidence in him. He trusted him implicitly. He advised me to do the same. After William went missing, when circumstances warranted, I would consult with him. This man knows a great deal about the machine.

The only thing I can think to add to this speculation is, that in previous seasons, Nina Sharp mentions that she thinks the design is rather similar to that often used by William Bell's, but doesn't recall him ever building it. We could string along that Bell may have found an association to his "other selves" with the Machine and Sam Weiss helped him along the way. But IMO, the way the story place out, the season 4 timelines, predicted with the episode LSD, almost seems to peel away some truth, that William Bell really was the bigger villain of the piece, instead of a misunderstood anti-hero. A lot of people speculate that he may have been a precursor to the Observer-war/occupation in season five. It's also unclear how they felt about the attempt at collapsing the (season 4) universes. I also believe that John Mosley and Jessica Holt are proof of "time-traveling" terrorists involved with William Bell--Jessica somehow had "advanced" Observer technology she used to trap September and that shows an understanding of future tech, the Observers, and important time line events. Then we have the whole mystery about how William Bell was able to apperate at the end of the season 4 finale...how? where did he go?

Not the answer you're looking for? Browse other questions tagged plot-explanation fringe .

71
In Back to the Future Part II, how could old Biff have made it back to 2015?
14
Why did the time machine work different for J?
8
How could the stars be going out in the alternate universe?
10
How did the machine work before this realisation?
11
What is the relation between The Cloverfield Paradox (2018) and Cloverfield (2007) and 10 Cloverfield Lane (2016)?
0
New(?) timeline or alternate timeline question
2
Is there any proof that the Observers were from the Alternate Universe?
3
How to explain the end of the game from the point of view of the kids?
2
What's going on with Laurits and his new "pet"?