Why did the crew take off their helmets? 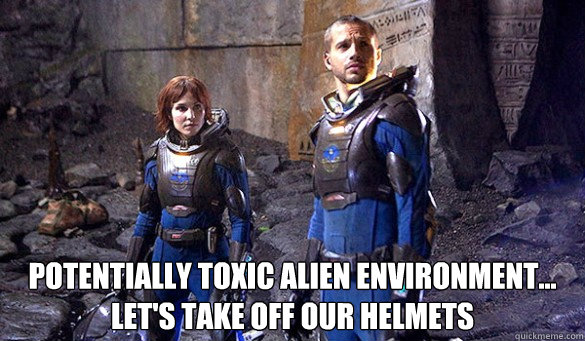 These were a group of some of the brightest scientists in the world, right? So why would they decide to take off their helmets on an alien planet?

Even if things were safe, they would still be unable to board the ship without going through quarantine procedures, so why do it?

To be clear, six characters venture onto the planet:

ALL of them take off their helmets.

Even if Holloway's scans revealed the Co2 levels were low enough for the air to be breathable, what about airborne diseases? I'm no scientist and I understand the dangers, so why don't they?

Does anyone have an answer?

The removal of the helmets isn't some half baked attempt at taking risks, and was an important plot point in the film.

The crew is following the "Pups" deeper into the maze of caves, and they come across running water. It's at this point they realize they are inside an alien terraforming plant, because the outside air is toxic but inside it's clean fresh air. As quoted by one of the crew "cleaner than Earth's actually".

It's Holloway who removes his helmet (as others protest), but he's also the one who wrote the thesis predicting the planet they were on would be occupied by the Engineers. At this stage in the film, the crew is still expecting to discover the Engineers alive and well. Their attitude is positive and they still view the Engineers as friendly beings.

After the crew removes their helmets, the two guys back on the ship settle their bet that the structures were used for terraforming.

The audience can now assume the Engineers are real and that Holloway's thesis was correct to bring them to this planet, but in the very next scene we find out everything went wrong. They watch the holographs run through the hallway and discover the Engineers are dead.

The fact that they now have their helmets off also raises the risk. Had they found breathable air after discovering the holographs, then the direction of the film would be completely different.

I agree it was stupid for them to remove the helmets, but it was also a mistake to go to the planet, enter the structure and open doors. This isn't a crew playing it safe, but one misguided by their own excitement in making a great discovery.

I agree the helmet removal was preposterous... hard to believe anyone would take that risk, given the stakes.

But think of it from a film-making perspective... if the characters don't remove their helmets, their heads and faces are largely obscured through much of the action of the movie, which would probably have been less visually compelling than when they're helmetless.

So, like a few other "mysteries" in Prometheus, I think the answer to this question involves film-making logisitics: the removal of helmets was likely inserted into the screenplay to allow the actors to be seen without their helmets.

Their scans indicated it was safe to breathe. As scientists, they constantly formulate hypotheses and test them, according to the scientific method. If all their tests indicated it was safe, the next step would be trials using living organisms. They could have used some other animals (if they had some) but I believe they were rather impressed by the whole meeting-our-makers-thing that they were very optimistic. They were also only archeologists, more trained in history and excavations, then in biology (and hence don't focus on the toxic gasses).

The thrill of breathing the air might be enough for them to go through quarantaine (would you pass up that chance because you don't want to go through quarantaine?). It's a discovery of a lifetime... Most reactions on "taking their helmet off" seem to forget this typical human behaviour. They've come all the way from earth in stasis, they're not turning back now. Don't forget that they might not be the brightest scientists as they're pursuing their own hypothesis. There was no selection protocol with ample (qualified) candidates for the job. Other scientists might be more careful.

13
What does David pick up off the floor early in Prometheus?
43
Why did it take a rocket to lift off the Earth but just shuttles to lift off the other planets?
6
Why are the members of the crew in Prometheus not bothered about Elizabeth Shaw or her medical condition?
3
Why didn't they take their prisoners to the extraction point?
11
Why did Amanda Waller's helicopter shoot off some fireworks after take-off?
2
Why did Jyn and Cassian take off their imperial uniforms?
6
How did Rhodey take the suit off in the military base?
6
Why did Hutch take the painting?