Chained up in the basement movie, comedy (maybe)? [closed]

Ask Question
Asked 2 years, 5 months ago
Active 2 years, 4 months ago
Viewed 877 times
6
votes
Closed. This question is off-topic. It is not currently accepting answers.
Closed 2 years ago.
Locked. This question and its answers are locked because the question is off-topic but has historical significance. It is not currently accepting new answers or interactions.

Okay, this is a movie I watched back when I was in school so, 2003-2008, on TV. Maybe HBO (India). The actors weren't recognizable, and I wouldn't imagine it was terribly high budget.

Guy's wife/lover has chained him up in the basement because she doesn't want to lose him... he manages to trick her into undoing the chains and then he ties her up in it and he goes out to a bar, where he picks up a girl and brings her back to this house... the wife manipulates the girl into letting her go.. she does so.. and.. I don't know, the guy is unconscious .. when he wakes up, his wife is gone, but the girl from the bar is there and he's in chains again...

I'm making up some parts for it to seem coherent... but my memory of it is pretty much like how you'd remember dreams you dreamt in your sleep... it's hazy. However, I am sure about the ending being a twist. It didn't have the feel of a thriller/horror... and with that twist ending... was prolly drama/comedy.

EDIT: Serious Moonlight isn't it, although plot wise, it does hit some of the notes... I should mention that the setting, in general seems like small town America... none of the luxury seen in Serious Moonlight, more asphalt and trucks.

This is the plot of TV movie Hitched from 2001 that starred Anthony Michael Hall and Sheryl Lee. From TCM's synposis:

Ted and Eve are newlyweds who have recently purchased a new home, complete with a hidden downstairs "speak easy." Ted works long hours as a luggage salesman, and Eve grows tired of her husband's absences. One night, Eve not only learns that Ted, accompanied by another woman, has been in a car accident, but also that he has been unfaithful to their marriage.

Upon Ted's release from the hospital, she uses chains to confine him downstairs in the speak easy where he becomes a prisoner in his own home. Although Eve is holding her husband captive, she reports him missing to the local police station. As a result, Eve meets Detective Grant with whom a mutual fondness develops. Grant reports to Eve that her husband has had at least five flings with different women. After some time, Ted is able to escape and switches places with his wife, whom he now holds captive in the speak easy. When Grant stops by the house, he is surprised to be greeted by Ted, apparently no longer missing.

That evening, Ted leaves the house and goes to a bar in search of companionship, but he realizes that he truly loves Eve. Inebriated while driving back to his faithful wife, Ted hits a pole and dies. Grant, who has become suspicious, returns to the house and discovers Eve downstairs, malnourished and fatigued. He releases her from her chains. While she is passionately kissing him, Eve manages to lock Grant to the same chain affixed to the basement wall, making him a captive in the cellar. "It's best this way," assures Eve. "Now you're all mine."

You can find the trailer here. 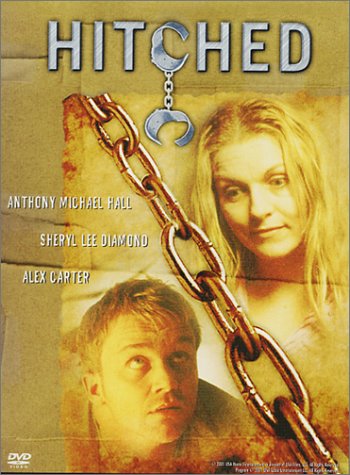 Not the answer you're looking for? Browse other questions tagged identify-this-movie comedy .

16
Husband decides to divorce her for a younger female, she doesn't let him leave, they end up together

57
Was the original “Pink Panther” movie intended to be a comedy?
2
On the elements of a internationally successful comedy movie
5
What are the differences among Celtic American comedy, Jewish American Comedy and African American comedy?