How did they film the walks between the Twin Towers in The Walk?

The movie The Walk based on the story of 24-year-old French high-wire artist Philippe Petit's walk between the Twin Towers of the World Trade Center on August 7, 1974.

Here Joseph Gordon-Levitt act as Philippe Petit walks between the Twin Towers of the World Trade Center at the end of the movie.

He wouldn't have walked across the Twin Towers but did he learn to walk on the rope?

And how did they really made the Twin Tower walking scene? 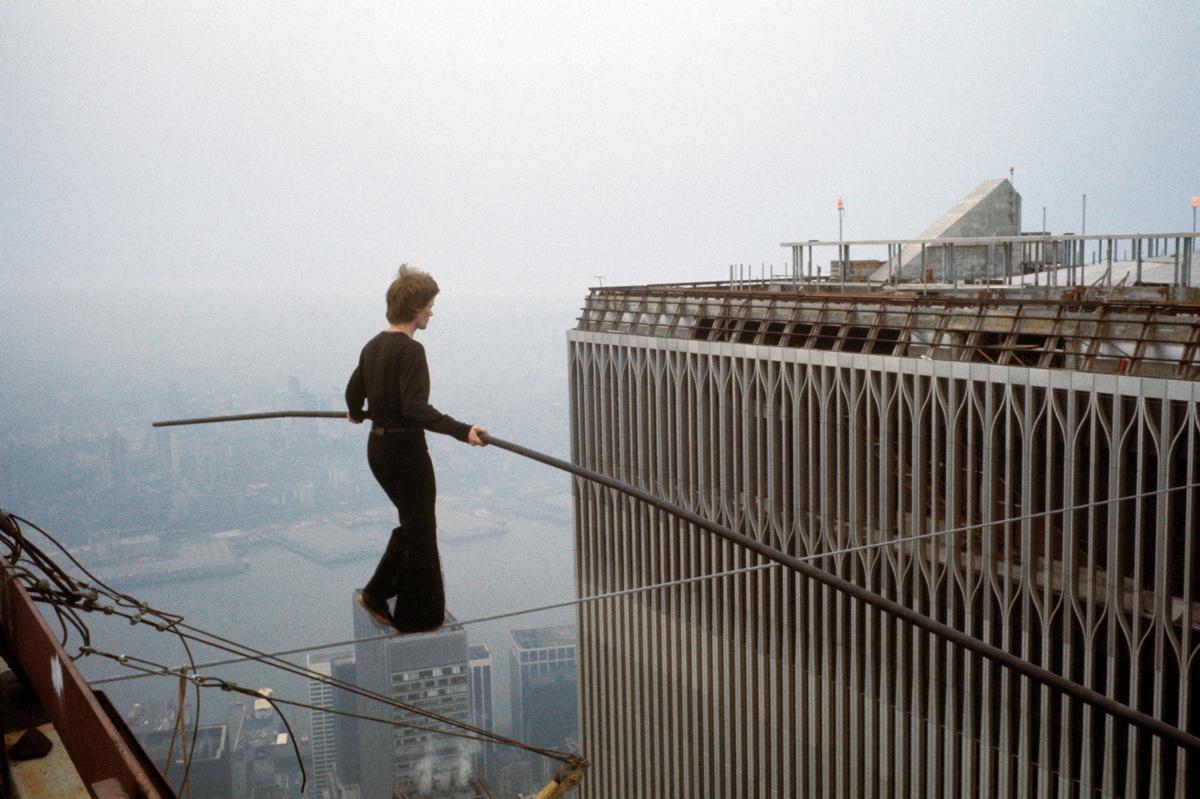 They acquired the original blueprints for the Trade Center and the production designer Naomi Shohan designed and built an enormous, 40-foot-by-60-foot corner of the South Tower to film most of the actions. Since the two towers were largely mirror images of each other; Shohan could simply strike the stage dressing on top of the roof and re-dress it for its opposite corner.

Relying on the original blueprints for the Trade Center, Shohan designed and built an enormous, 40-foot-by-60-foot corner of the South Tower, where most of the action takes place as the story stays with Philippe during the caper. Though the filmmakers would need to film action from the North Tower as well, they could make due with only one corner, because the two towers were largely mirror images of each other; Shohan could simply strike the stage dressing on top of the roof and re-dress it for its opposite corner.

To recreate the rest of the roof, the towers, and 1974 New York as seen from nearly 1400 feet in the air, Kevin Baillie and his visual effects team built a model that is meant only to be viewed from above – Petit’s point of view during his walk. However, because Zemeckis planned a few shots from below – for example, from the World Trade Center Plaza – these areas of the model are complete and ready to be explored, as if you were walking around the city.

In the end, recreating the structures of the city and the Towers took Baillie’s “construction team” of 15 people three months to complete – four man-years’ time – after which a team of more than 100 artists spent five months integrating that digital world into the green screen footage from set. “There were definitely times when it was emotional, for both myself and the crew,” he says. “As we went through the reference photography, we saw a lot of imagery from 9/11, because those are obviously the latest images that you can find of the towers. So I think we felt a great sense of responsibility for portraying the towers in a way that was honest and also honored them. 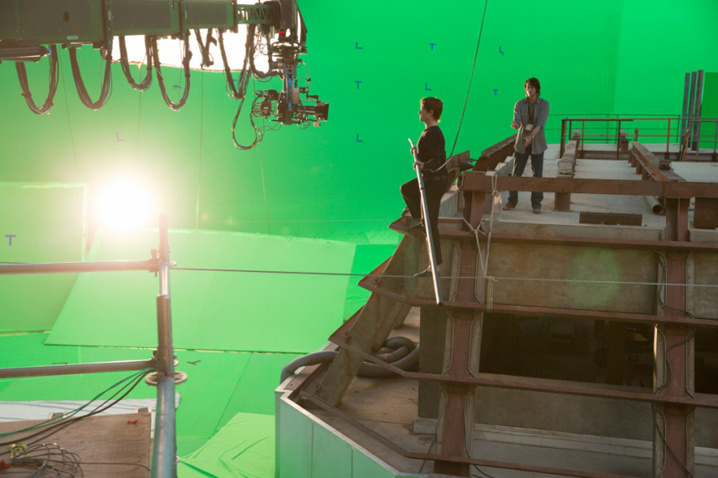 “For the third-act walk, we built one corner of one of the Towers (40 feet long and 12 feet high),” Baillie explained. “That’s all they could fit on the stage in Montreal and still have room for about 100 feet of cable for the walk action to happen [with actor Joseph Gordon-Levit as Petit].

“The rest was green screen in all directions. We had to do digital extensions of the rooftop and the Towers and recreate those. And 1974 New York looks remarkably different from today, so we couldn’t just take photography of modern day New York. We had to recreate New York completely from scratch. What you see is 20% filmed real and the rest recreated. Rodeo did set extensions of the World Trade Center lobby.”

Building New York from scratch (including buildings, hot dog stands, newsstands, cars and people) first began by getting reference footage for two days in a helicopter to monitor traffic flow and how people look from that height. “The unexpected outcome for me was getting permission to hover right over Ground Zero at 1,400 feet, which is the exact place where Philippe walked. I was able to evaluate every shot in post around that sensation,” Baillie added.

The cityscape was achieved through a combination of Maya and Modo for model making and then they used Mari and Modo, depending on the artist, to texture the buildings. Atomic did all of the look development, shading, and lighting in Katana. Then it was all rendered in Atomic’s in-house cloud-rendering platform called Conductor, which is being released commercially at the end of the year.

“We do all of our rendering in the cloud and it manages the entire cloud process from beginning to end so an artist doesn’t have to think about it,” Baillie said. “By doing that, we rendered about 9.1 million processor hours in the cloud for The Walk, the largest cloud-rendered feature film, which is more than 1,000 years on a single processor worth of compute.” 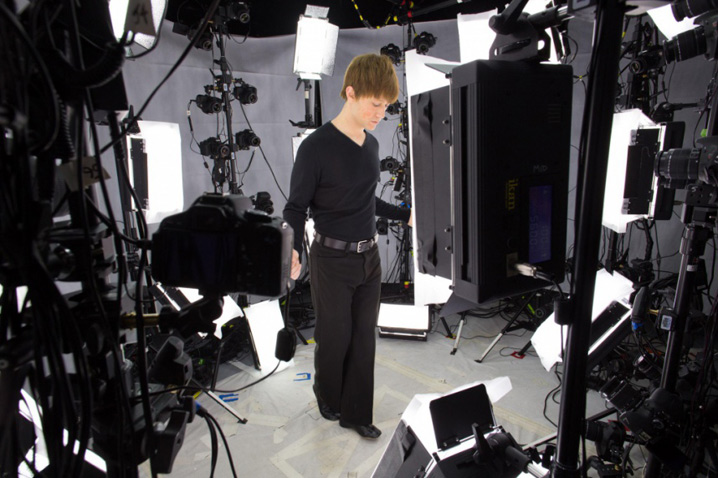 Gordon-Levitt was trained to perform the walk. During the photography, sometimes they filmed and sometimes the stunt double.

“The wire was rested inside this Canadian Bar. It was a 20 foot long steel beam with a slot in the middle that we were able to fit the wire into. So we’d move it below the wire and raise it on these tripods so that it sat in the beam. Joe’s feet would still be on the wire, and he’d still be able to feel the wire, and his foot would curve around the wire, but then he would have the beam on either side of it to support him if he was getting off-balance. Occasionally in comp, we’d use NUKE’s warping tools to warp the wire very subtlety with his weight. We used the shots of either Joe really walking on the wire or his stunt double walking on the wire for how the cable moved and how it kind of breathed during the walk experience to make sure we were emulating that same look. And if his feet were touching the Canadian Bar and flattening out and not curving around the wire as much as they should have been, our compositors would go in and curve Joe’s feet a little more and even paint in a little rounding to make it look 100 per cent believable.”

“The key to all that succeeding,” suggests Baillie, “was actually that there were so many different methods that we used. Sometimes Joe was walking without the Canadian Bar, sometimes it was the stunt performer, Jade Kindar-Martin, who’s a Cirque du Soleil trained performer, and then sometimes it was the Canadian Bar. If we’d used the same method again and again it would have become obvious that we were faking something, but because we were only faking it sometimes, you buy it more.”

Gordon-Levitt was trained by Philippe Petit to perform this walk. From Collider (Thanks to Obsidian Phoenix)

Collider: What was your level of either training or assisting Joseph Gordon-Levitt and his stunt performers?

Philippe: Of the stunt people, there was one young man who is both a professional wire-walker and stunt man, so he was already at ease in providing all the action that was needed for the camera. I was the first one to say to Mr. Zemeckis, “I could train your actor and have him physically walk without anything else on a wire—not a very high wire or very long one —but it would help don’t you think?” And he said, “No. You cannot do that, it is impossible.” I told him that I think it is possible, and it would help show my work. I would love to have the actor, really walking, on a real wire. So we looked at the calendar and between all of our schedules, it was determined that I had 8 days. So in 8 days I trained Joseph Gordon-Levitt to walk on a tight rope.

Not the answer you're looking for? Browse other questions tagged film-techniques effects the-walk .