How do they film a volcano erupting in such a way as what the volcano did in Dante's Peak?

In Dante's Peak (1997), Harry is a volcanologist and also the protagonist of the movie.

The movie is all about the volcano that Harry is investigating blowing up, sending ashes, rocks and lava especially flowing and through the air.

Many things were destroyed by this and Many people were burnt to a crisp by the lava and buried by ashes.

What I really want to know is:

How did they film the volcano erupting and all the debris, ashes and rock flying around?

I am sure it is some form of CGI (the ashes could be), but with the rocks and debris flying around the place?

I am sure it is some form of CGI (the ashes could be), but with the rocks and debris flying around the place?

Although there was some CGI in the movie it was mostly in the form of compositing the actors into actual shots of quarter-scale miniatures.

There is an extensive interview with the VFX supervisor Patrick McClung over at VFXBlog...

vfxblog: It’s funny, a lot of people think that they pyroclastic cloud work was digital, but it was basically practical, wasn’t it?

Patrick McClung: Richard Stutsman was one of the special effects supervisors. Richard was really good at this stuff, and we knew we had our hands full with this film, so I said, ‘How about just shooting some sort of powder out of air canons?’

[...] But when you buy it it’s powder and it was really dark. It was perfect for what we had to do. And every time we were shooting these air canons off I think he was using like six hundred pounds of this stuff, and because it in essence was dirt, it could fall on the ground and we didn’t have an environmental hazard on our hands. We were shooting at about 250 frames a second and the stuff would shoot up maybe a 100 feet in a couple of seconds. It was pretty impressive.

vfxblog: One of the things about the way some of the pyroclastic cloud appears in the film and even when it’s off in the distance is that it’s so well integrated in the shots. And I think that is testament to the digital compositing even back then. Can you talk about some of the challenges of that?

Patrick McClung: Well, you know, back then again the whole digital thing was fairly new and it was hard to find people that were versed in this software. It was very hard, there weren’t a whole lot of people. And so my big fear starting on the show having done just two small shows because there was Titanic and Fifth Element in front of me that they would sort of just grab everybody, and indeed that’s what happened. So some of the shots were done there at Digital Domain, some were done at various post-production houses in Los Angeles. A lot of those houses are gone now, gone out of business.

But it was just a person with a very good eye, and because we were doing these pyroclastic clouds outside we had a nice contrast between the sky and the clouds, and the clouds were pretty dark and the sky was pretty light. So you could pull a luminance matte from it, you know basically make it, it’s like shooting almost in front of a blue screen or green screen. And it was just a lot of finessing the composites because some were behind people, which were not too happy, and trees and what have you. So it would be you know making, generating mattes from skies and then hand-rotoing basically, hand-drawing mattes around people and so forth. 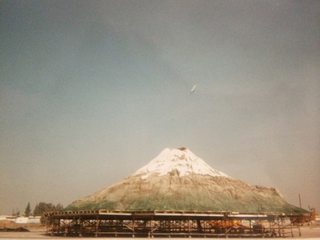 Not the answer you're looking for? Browse other questions tagged effects dantes-peak film-techniques .