Why does Captain Christopher Pike use a Wheelchair?

In the Star Trek (2009) movie, Captain Christopher Pike is injured during his capture, and is clearly seen using a wheelchair at the medal ceremony for Kirk. 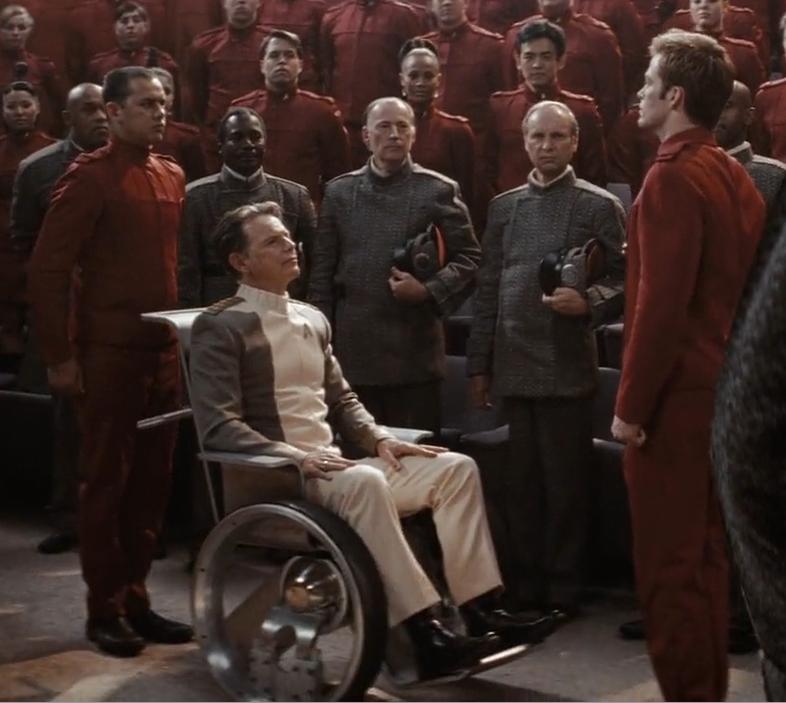 The question is: is there any in-universe explanation why a traditional wheel chair would still be in use in the year 2250? We already know they have anti-grav / levitation technology; not least because in the second scene of the film, a policeman/bot is portrayed riding an anti-grav motorbike. Is this just an anachronism/oversight by the film's producers? Maybe they thought he'd cast a less sympathetic figure if he was hovering there instead?

We already know they have anti-grav / levitation technology; not least because in the second scene of the film, a policeman/bot is portrayed riding an anti-grav motorbike. Is this just an anachronism/oversight by the film's producers?

Are you forgetting the tremendous amount of power that is required to constantly levitate? If you're into the physics, you would need an engine that supplies a dV of 9.81 m/s every second that the wheelchair is levitating. That is a lot of energy.
There is a reasonable argument to be made for anti-grav transportation (on Earth, not for space travel). Levitation means that you do not encounter any friction from the ground (only the air), and therefore incur less speed losses due to friction, thus making for a more economical journey. Additionally: less wear and tear on the vehicle (e.g. the tires and axles), and also less danger from environmental hazards such as wet roads.
But none of those advantages really apply to a wheelchair. It's much too slow, and it hardly travels in a way that the economy of traveling around is an important factor to consider.

Also, an anti-grav motorbike won't be used every second that you're awake, compared to a wheelchair.

A wheelchair is reliable without needed to be refueled.

Also, your anti-grav motorbike argument falls apart even by today's standards: We have electric wheelchairs today, yet not all wheelchairs are electric. The most advanced technology isn't always the most commonly used technology, and it rarely is the only technology that is still used (you're arguing that because anti-grav exists, only anti-grav should still be used, which is a big assumption).

Not the answer you're looking for? Browse other questions tagged character star-trek star-trek-2009 .

12
Why does the Joker always use a knife?
13
How does the Red Matter singularity work?
10
What's the purpose of the plastic curtains in Captain Robau's shuttle?
4
Why was Patches O'Houlihan in a wheelchair?
8
Does Noel ever comment that Frasier looks like Captain Bateson?
28
Why does John use the surname “Connor”?
6
How come they couldn't heal Captain Pike's injuries in Star Trek?
25
How did Captain America use this power?
18
Why did the original Star Trek change the Enterprise captain?