How did Daenerys know where to attack?

In Game of Thrones Season 7 Episode 4, Jon Snow and Tyrion Lannister counsel the Queen not to attack the city. The next scene shows them attacking the Lannister caravan with Jaime in charge.

How did they know to attack there?

And how did Jaime not know he would be vulnerable whilst travelling on this road?

Highgarden and King's Landing are connected via the Roseroad: 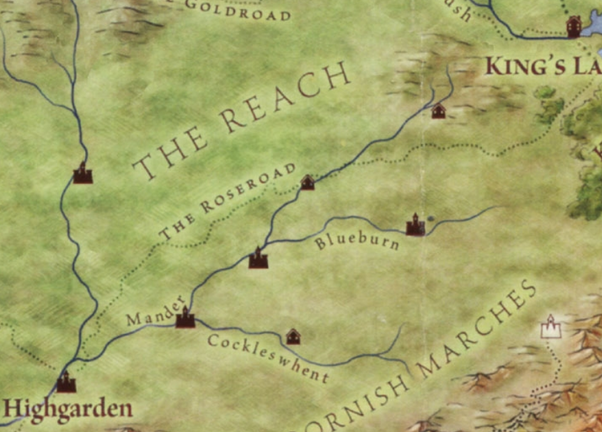 It is very likely that Dany and her Dothraki just followed this route with scouts to find an easy place to attack and just laid in wait to attack an easy-to-hit section, i.e. the rear.

The caravan also wants to get across the Blackwater Rush before nightfall as they are already spread thin. They knew they were vulnerable travelling this way but it is the only main road and is straight to where they need to be so is quicker.

We need to get the last of these wagons over the Blackwater Rush before nightfall.
The head of the line is ambushed, the tail will never be able to reinforce in time.
Well, we are stretched a bit thin.
Game of Thrones, season 7 episode 4, "The Spoils of War"

Note the potential gain for travelling this way (i.e. straight home with the gold) outweighs the potential risk, so it is worth it.

Also note that news of a large Lannister Caravan train is easy to come by. It's not like a couple of guys walking on their own — this would have been noticed by a lot of people and so news of its whereabouts would be readily available.

She found out they went and sacked Highgarden instead of defending Casterley Rock. She knows where both locations are. She knows the route they'd have to travel to get all the loot back. She knows, despite other magical travel speeds depicted in the show, that it is highly likely that she's going to catch a portion of the army en route. I'm sure she would have preferred to catch the entire caravan, including the gold wagons and the whole army.

The fact that she was able to catch at least portion of the forces and the cargo wagons was simply a matter of time, distance and physical laws.

If, say, the Lannister force had taken a less direct route that wouldn't take them as close to a landing area for the Dothraki force, then that Lannister force would be in the field much longer and the greater speed and mobility of her forces would still allow them to merely continue on to intercept along the alternate route, probably catching even more of the caravan in the field. So, yes, it's good fortune that she caught them there, but if they weren't there, they would have just proceeded to the next route and caught them at that location.

Jamie obviously knew there would be some vulnerability, hence the discussion about needing to hurry the remaining train and the ability of one end of the force to help the other in case of attack. Given his ability to be a couple steps ahead, and never having encountered or actually knowing of the capabilities of the Dothraki or dragons, he was probably hoping their element of surprise would buy them enough time to get back before Daenerys would form a plan and get it into action. He clearly overestimated his own forces' ability to withstand an assault, given those things he did not know, as well.

Keep in mind that none of her troops were left guarding Dragonstone (I'm not clear how much use the remaining two dragons would have been had there been an attack while Daenerys was gone), and given how much of their fleet had fallen to Euron, ferrying the Dothraki was not without risk, as well. It's possible that those factors would have caused someone else to hesitate or form some other backup plan.

I don't think the fact that it worked out that way and she was able to hit them was logistically exceptional.

26
Why did Qhorin Halfhand attack Jon Snow?
33
How does Eddard Stark know that Bran saw Cersei and Jaime together?
40
Why did Daenerys say this in "The Queen's Justice"?
31
Why didn't Daenerys use the opportunity to attack this character?
31
Why does Peter Dinklage's name appear first in the opening credits?
12
Every man has fought against the Starks
62
Point of the Dothraki's attack in GoT S8E3?
26
Why did the soldiers of the North disobey Jon?
6
Did the queen allow Jon to visit Tyrion?
9
Do the people of Westeros know who really poisoned Joffrey?