I was watching History Channel's 9/11 programming.

Part of this was the 2006 film United 93. I wanted to compare what cuts had been made to the theatrical version, so I dug out my Blu-ray and popped it in. Lots of reduction of swearing. Then I found something that was quite curious. It looked as if, in a few scenes, there was more picture in the top and bottom than on Blu-ray.

Here's a screenshot from the History broadcast 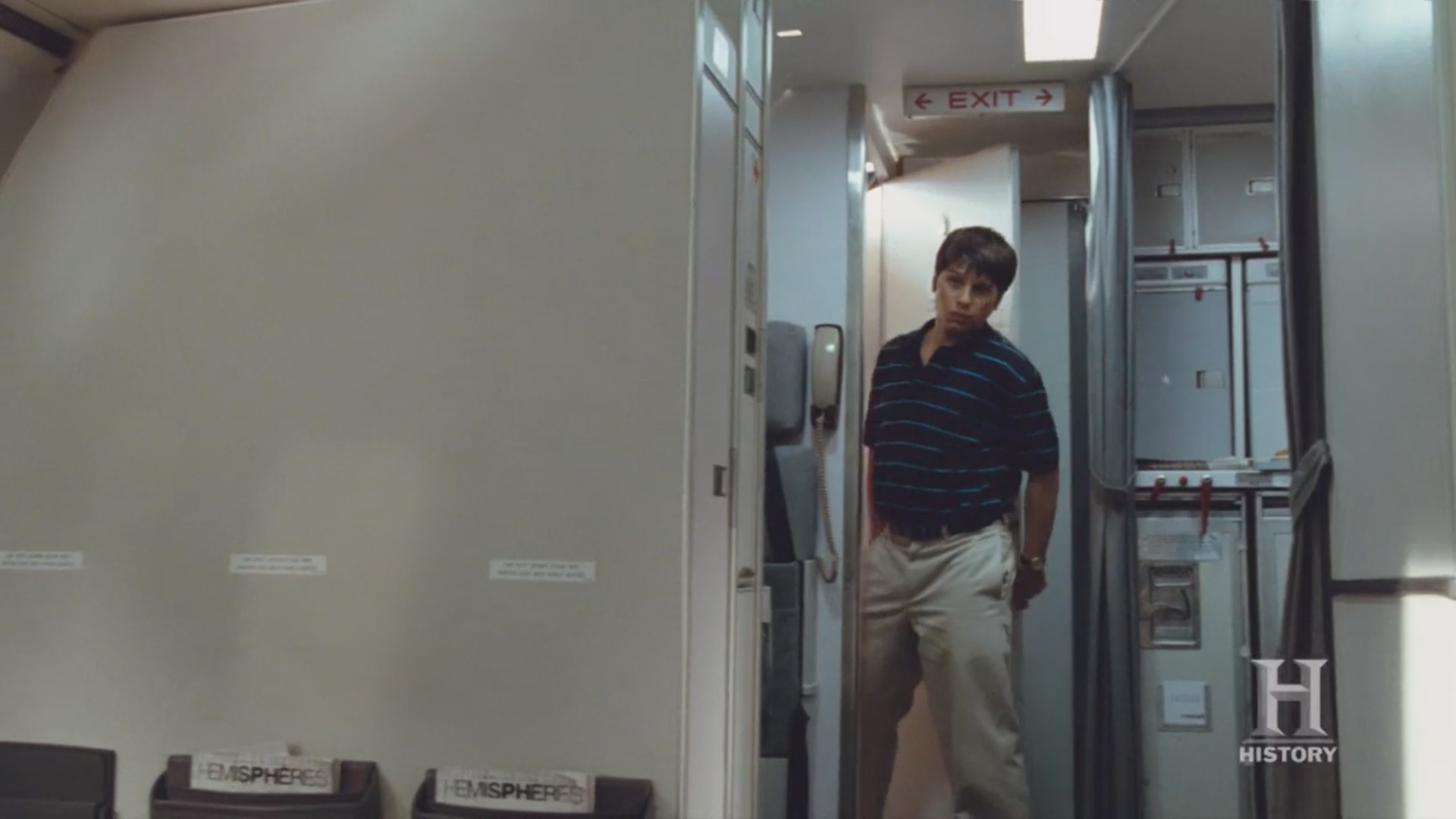 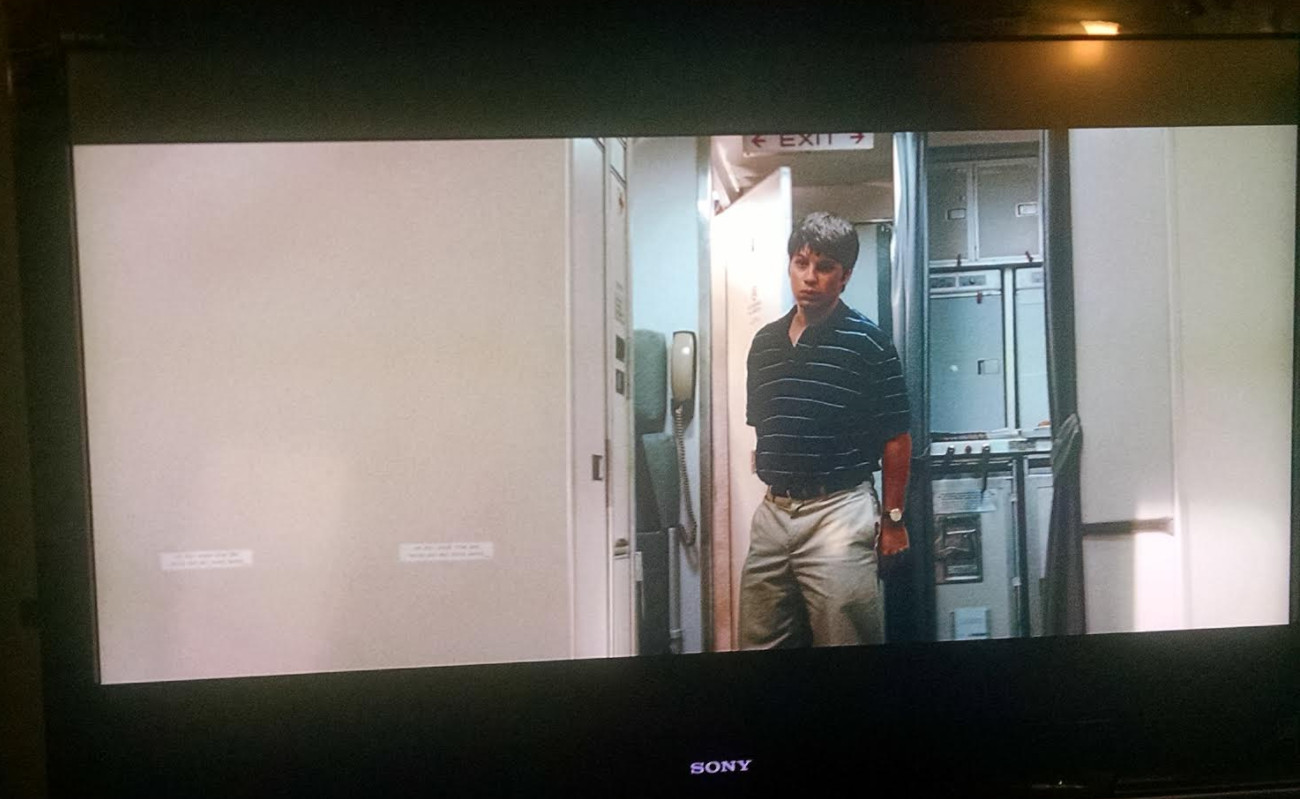 Pardon my crappy camera skills but the whole image is there, black bars too.

I'm just curious why you can see United Airlines's in flight magazine "Hemispheres" on the TV broadcast but not on Blu-ray. The black bars cover it up. I was under the impression TV channels crop their images to get rid of the black bars by trimming off the sides, and top and bottom, and that Blu-ray was the whole film.

Is this not the case?

35mm film has always had an aspect ratio of approximately 4:3. When widescreen cinematography became popular in the 1950s, it was achieved in a number of different ways.

Films with a 1.85:1 aspect ratio are typically shot "flat," with no special lenses, and the top and bottom of the filmed image are simply cropped to produce the final widescreen image. The monitors used during filming usually had markers indicating where the 1.85:1 image would fall within the full 4:3 frame. When 4:3 was the standard television ratio, these films were often presented in full screen by "opening up" the image and showing the entire 4:3 filmed image. This is moot today as modern 16:9 televisions have an aspect ratio very close to 1.85:1.

Presumably because using the same process for 2.35:1 films would result in too much of the film's frame going unused, 2.35:1 films use a different approach. Actually, there are two common approaches for shooting a 2.35:1 image on 35mm film. The first is to use an anamporhic lens, which basically squeezes the image horizontally, so that on the film reel itself, everything looks tall and skinny. When the film is projected back using the corresponding projection lens to "unsqueeze" it, the result is a 2.35:1 picture. The squeezed 2.35:1 image takes up the entire 4:3 film frame, so unlike a flat 1.85:1 film, there is no extraneous picture information at the top and bottom of the screen. When such a film is played on television in "full screen," it must be done via "pan & scan," where the sides of the image are cropped (and obviously this is still true for modern 16:9 televisions, though the cropping is less severe than it was on 4:3 televisions), which is the process you were expecting to be used for United 93.

But according to the IMDb, United 93 was shot "Super 35", which is another way of getting a 2.35:1 image on 35mm film. In Super 35, the area of the film that is normally reserved for the analog sound track is instead used for part of the picture. The recorded image is still roughly 4:3, but it's larger than it normally is, so the 2.35:1 image can be extracted without as severe a loss of resolution. As with flat films, there is extraneous picture information above and below the intended image, which can be exposed when a film is transfered for television.

According to IMDb, United 93 was released in 2.35:1 ratio. (but shot on 35mm which is typically 4:3 so framed for a wider screen and gives editor/director more choices on what to show later) Assuming you have a normal widescreen TV, the ratio of that is 16:9 or ~ 1.77 to 1 ratio. Blu-rays typically will display on your 16:9 TV Letter-boxed (the black trim bars on top and bottom) so you see the original image in a slightly smaller frame. If you were watching it in 16:9 mode (I can't tell from the Blu-ray picture if there is letter boxing ) they typically just cut some of the sides of the visible picture, but sometimes, they do a combination of panning (side-to side capture of the most relevant piece of the picture) and zooming. If they have a specific edit for Blu-ray full 16:9 screen, they may have zoomed cutting both bottom and sides. According to Amazon the Blu-ray is in the original 2.35:1 ratio, but that may just be a copy from the original film's specs.

The interesting thing here is that the History channel shot seems shows more detail on top and bottom as you mentioned but possibly more to the left of the screen - you can see the start of the wall on the left - but it might be a split second difference in capture time.

So here is what I think is going on:

United 93 was filmed in 35mm - which is essentially 4:3 format. It was edited for theatrical release as 2.35:1 (which cuts the top and bottom off to make it look wider). The broadcast version was released with a 16:9 ratio which re-introduced some of the top and bottom captured image. Your Blu-ray is showing in letter-boxed 2.35:1 so less top and bottom.

Not the answer you're looking for? Browse other questions tagged aspect-ratio united-93 .

23
Reasons to use an aspect ratio of 2:1
0
IMAX and Aspect Ratio
19
Why the aspect ratio change from 4:3 to 16:9 to even wider formats?
3
IMAX ratio on 16:9 TVs
14
Why are Black Mirror episodes in varying widescreen aspect ratios?
3
Are the home video releases of the Harry Potter films in the original aspect ratio?