In Marvel's The Defenders (TV Series 2017– ), Luke Cage (aka Power Man) can withstand gunfire and Danny Rand's punches and kicks (except Iron Fist). He can break metal weapons too. From his own season, we learned that surgical knives could not pierce his skin.

So, in The Defenders, why doesn't he best the Hand minions in every battle easily? All the Defenders need is Luke Cage. Why not just put him in front of every fight.

Is there some weakness that I don't know about?

In "Manifest" (Marvel's Luke Cage, S01E07), Diamondback shoots Luke in the abdomen with a Judas bullet, which uses "alien metal" and is powerful enough to penetrate his skin, and once it enters his body, it drills further into his organs before exploding, causing massive internal injury. 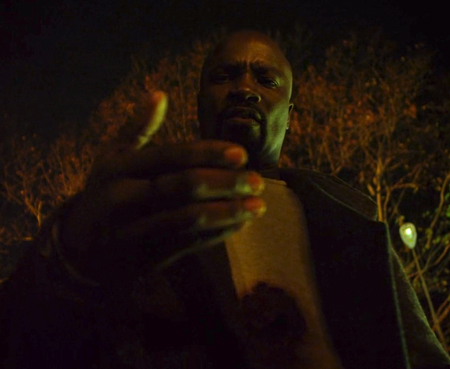 From the Judas bullet wiki article:

The Judas Bullet is a special kind of prototype firearm ammunition developed by Hammer Industries using metal salvaged from the Chitauri Invasion.

In an attempt on Luke Cage's life, Diamondback shot Luke twice with these bullets, which caused near-fatal injuries for him with a shot to the gut and shoulder. They can penetrate Cage's skin because of the unique properties of the Chitauri metal which could drill into him.
—"Judas Bullet", Marvel Cinematic Universe Wiki

Indeed, with Judas bullets, Luke Cage's unique survivability power (unbreakable skin) backfires on him, as it is now almost impossible to perform surgery to remove the shrapnel from inside his body, as no surgical knives can penetrate the skin.

In "Now You're Mine" (Marvel's Luke Cage, S01E11), Luke surrenders to the SWAT team because they have been issued Judas bullets - normally the police would present no problem to this superhero, but now one of his weaknesses is being exploited.

In "Ashes, Ashes" (Marvel's The Defenders, S01E06), Stick uses a special kind of incense to cause Luke Cage to be knocked out unconscious. 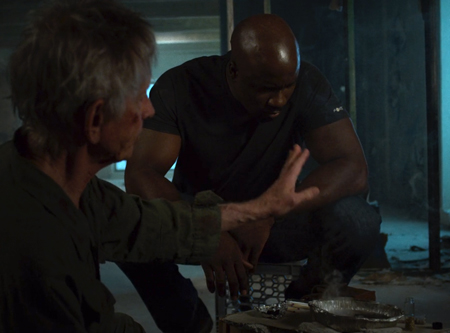 In "Fish in the Jailhouse" (Marvel's The Defenders, S01E07), Luke is still unconscious:

COLLEEN: What do you think it was?

CLAIRE: Some kinda drug. They found a weird incense at the crime scene. His skin's what's bulletproof. The rest of him is not
—"Fish in the Jailhouse" (Marvel's The Defenders, S01E07)

Claire is referring to Luke's physiology - his biological functions and ability to metabolise toxins may be just as normal as an average human's. This makes him vulnerable to poisons and substances that would intoxicate him in any way.

SOWANDE: They say you can't be broken. We'll see about that.

He uses special striking techniques that involve the manipulation and transfer of energy (chi), as per the K'un-Lun training, that seem to be exerting enough percussive force so as to hurt Luke (through internal injury) in a way that he can hold his own against this super-powered individual, fighting him off long enough until he gets hit by a truck.

In "AKA Take a Bloody Number" (Marvel's Jessica Jones, S01E12), Jessica shoots Luke in the head at point blank range with a regular shotgun. While it didn't penetrate his skin, the percussive force did enough damage to knock him unconscious (and probably cause some minor traumatic brain injury) until the next episode. 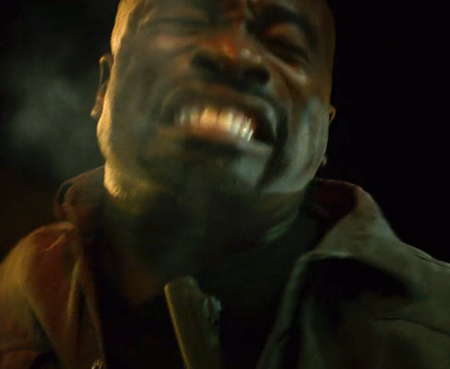 The Hand could use chemical weapons, Judas bullets or shotguns at point blank range to deal with Luke, not to mention that he likely has other weaknesses (it's possible that they could drown him, too), so for him to go after the Hand alone would be risky - at least as a team (The Defenders) they are a formidable force that proves more difficult to have their weaknesses exploited.

Note: In Marvel's Jessica Jones, Luke is mind-controlled by Kilgrave, so you could propose this as another weakness, but, eventhough the Hand dabbles in magic and Kilgrave isn't necessarily unique in the Marvel Cinematic Universe (indeed, he really isn't if we look at Scarlet Witch, introduced as a telepath in Avengers: Age of Ultron (2015)), there was no evidence to suggest the Hand had access to this kind of power, at least not available to them in the plot of the show, so I dismissed this "weakness".

I also did not list any weaknesses presented in the comics, as I wanted my answer to be in-line with the Marvel-Netflix series, but there are some weaknesses that weren't mentioned (e.g. radiation, Adamantium, lasers, etc.) for this reason.

So, in The Defenders, why doesn't he best the Hand minions in every battle easily? All the Defenders need is Luke Cage. Why not just put him in front of every fight.

Because he can only fight one person at a time...maybe two.

The Hand had dozens, if not hundreds, of fighters and Luke Cage can't be everywhere at once.

13
How strong are Jessica and Luke?
3
Where does Luke Cage get the smart phone he uses?
8
Are there any other references to Gang Starr lyrics in Luke Cage dialog?
5
What exactly happened to Luke Cage in that experiment after which he got his powers?
4
Why does Luke appear in Jessica Jones and Jessica doesn't appear in Luke Cage?
7
Is this scene in Luke Cage a Godfather homage/reference?
6
"Me say war", Luke Cage season 2, is this just "Movie language"?
2
Why was Ddub unhappy with Luke at the end?
29
Is Odin inconsistent about the powers of Mjolnir?