What exactly started the war and who invaded them?

In Tomorrow When The War Began (2010), there are a group of teenagers that decided to go camping in the outback.

They were there (I believe) for a little while, then one of them (I'm fairly sure it was one of the girls) woke up to a cloudy day and also with a large formation of war planes overhead heading in the direction of war. 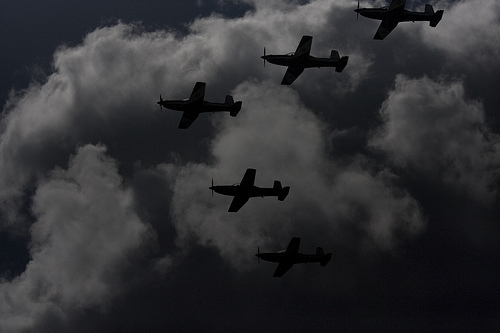 In later scenes we see one of the teenagers house that has been raided and the dog dead. Also the fact that there was a big prison camp holding the teenagers parents. There was one man who went crazy, tried to hand fight one of the enemy soldiers and as a result, he was shot in the face.

The teenagers were then spotted and pursued but did not succeed with killing the teenagers.

There was a later scene of tanks crossing a bridge.

What exactly started the war in the first place?

It is never revealed who the invading army are; but they appear to be invading due to the need for land.

It turns out that the origin of the invading army is never revealed. It is suggested that the original author did this in order to limit offending the country in real life, due to the way in which the army acts in the actual series. In my research, the enemies are shown to be (mostly) cruel and 'with no redeeming qualities'. I have found speculation that the army is French, Chinese, Malaysian, Korean, Indonesian, and more generically, Asian.

A constant motive I find is that the invading army wishes to take advantage of all of our undeveloped space. I guess no-body told them that it is undeveloped because it is also, mostly, uninhabitable.

We have more information on who they are not.

An article on rsimpson.id.au provides insight into what we know of the enemy, from the books:

The Enemy at rsimpson.id.au(emphasis mine):

Anyway, it is easier to identify who they are not. They are not:

So who are they ? What are their characteristics ?

The author of the article goes on to suggest that what we know does not match any single country, and that they believe this to have been a deliberate plot device, on part of John Marsden. The author makes note of a popular theory that the army is simply Asian, but comments that they interpret the army as French.

There is suggestion that the invaders are a South Asian coalition.

The Wikipedia article on the series comments that the invading army is a coalition of South Asian countries, seeking a solution to over-population.

"Tomorrow series" at Wikipedia (emphasis mine)

Likewise, no parts of the war outside Ellie's immediate perspective are covered; the reader is not informed exactly how much of the country is under enemy control, or how well the war is going for the Australian military. However the invaders are described in the series as a coalition of highly populous South Asian nations seeing the vast underdeveloped spaces of Australia as a way to tackle their overpopulation (Most likely Indonesia, Malaysia and the Philippines) and the series features multinational colonies of enemy civilians being set up in conquered territory.

Another user finds a lot of similarities with Indonesia.

A user has also asked about the army, on Quora, and once again, we are only met with speculation:

"In John Marsden's Tomorrow, when the war began, who is the invading army" at Quora(emphasis mine)

"It is never actually mentioned, in the books or movies. It is likely to be Indoneisa, our neighbour to the North has a strong military, and they have a lot of peopl[sic] and not enough space. They aren't as fortunate as Australia for sure, and in the movie, it is mentioned that the invaders are Australia's "less fortunate neighbours[sic]."

It can't be China, simply because then New Zealand, even in with their military super boosted by the war, would never be able to win against China. Apparently the North Korean flag can be seen on the helmets of the soldiers in the movie, and it makes sense, nobody from North Korea will ever be offended by this, and I didn't notice this flag at all, keeping in mind I learnt[sic] this fact after watching the movie. The invading army seems far two equipped and capable, with tw[sic] is, army, and good aircraft, to be the DPRK. And even then, the U.S. Would probably jump at the chance to save a nation from invasion from North Korea, especially a western country, and an ally.

I can't see it being China or North Korea, so even though technically, the answer is nothing, because it is never mentioned, but I would have to say Indonesia, Papua New Guinea was allied with Australia during this war, and they also wouldn't be able to successfully take over Australia. The same with Malaysia, but they don't have a very high population, so they wouldn't need to invade as much as indoneisa[sic] would. I guess it could be Singapore, they have a strong airforce, but because they probably don't have a good enough population for the invasion, and they could easily be beaten by Indonesia, even though I think Singapore has a better airforce, if they were to invade Australia, assuming indoneisa[sic] doesn't help."

Not the answer you're looking for? Browse other questions tagged plot-explanation tomorrow-when-the-war-began .

4
What exactly was the pirates' plan?
3
Why is Adaline watching old tapes and who recorded them?
3
Who exactly committed suicide in the movie 'The Bounty Hunter'?
2
What exactly happened with Kenny in Shut Up and Dance
16
Who are the people in the Pit and why don't Bane, Talia and even Batman help them escape?
8
What exactly happens in this scene with Gamora and Thanos?
11
What exactly happens at the snap?
1
Who are Ragnar's sons and wives, and how close is he to them?