I apologize in advance, this is going to be really vague because I was really young when I saw it—roughly around the early 90's. It's definitely science fiction. I'm unsure if it's a movie or an episode of a TV show (something like Twilight Zone). It definitely wasn't in a theater, it was on TV.

My best memory of the plot is that there was a woman who wanted a child, I can't remember if she was married or not, or whether she could have children or not, but she winds up getting a child from a lab or a company? I think the idea was that the child was man-made, or grown in the lab? I'm not sure if she knew that or not. She might have thought she was adopting a normal kid?

I also sort of remember at some point the child is inside of a large barrel. It might have been a blue plastic barrel, or a large brown cylinder. I think it had a plastic lid. I can't remember if it was the container the young child was delivered to her in, or if the child was maybe hiding in it? I think part of the plot was at some point the company wants to take the child back, and she's running from them. I vaguely remember her trying to rescue the other children, and they might have all looked the same? Like the child might have been a clone or all the same “model”? I feel like in the beginning there's just one “barrel” and the child is inside of it. But later on there's a scene where she sees lots of barrels and realizes how many of the kids there are.

Sorry, I realize how vague that is. That memory has been lingering in my brain forever, and I'd love to get it out. I've searched every combination of phrases I can think of but can't find it. If anyone knows what movie or TV show this is I'd be super grateful. Thanks!

Konrad is a perfect instant child "born" in a factory at age 8. Due to a mistake in the factory's computer, Konrad is delivered to Bertie Bartolotti, a woman whose life and appearance are in a constant state of disarray. Konrad arrives looking like a gremlin, but when Bertie pours a nutrient solution over his head he changes into a fully-developed, perfect 8-year-old child. The factory realizes a mistake was made, and recalls Konrad, but he does not want to leave his new family and friends.

The first minutes are here. Konrad arrives in a blue barrel, as you can see in the poster: 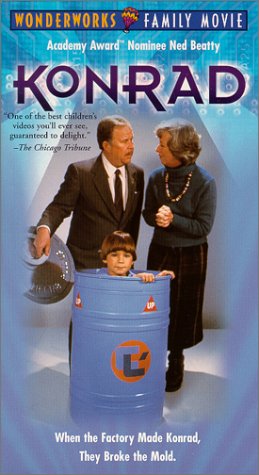