Why didn't Beric use his flaming sword to keep everybody warm?

In Game of Thrones Season 7 Episode 6, after

being surrounded beyond the wall by the Army of the Dead

the team had to stay out in the cold for many hours.

Upon request of a flame in order to

burn Thoros' body after his death

Beric lights up his sword on demand.

Why does Beric not use his flaming sword to keep the team warm when they appear to be very cold?

There is no compelling logical explanation, it's a plot hole

In the books, Thoros of Myr always lit his blade with wildfire[1],

Gendry lit a candle and set it on the anvil while he took down a pair of tongs. “My master always scolded him about his flaming swords. It was no way to treat good steel, he’d say, but this Thoros never used good steel. He’d just dip some cheap sword in wildfire and set it alight. It was only an alchemist’s trick, my master said, but it scared the horses and some of the greener knights.”
—A Storm of Swords

and Beric Dondarrion would slice his hand and use his blood (and a prayer to the Lord of Light) to achieve the effect.

But when the Hound made to step toward his foe, Thoros of Myr stopped him. “First we pray.” He turned toward the fire and lifted his arms. “Lord of Light, look down upon us.”

All around the cave, the brotherhood without banners lifted their own voices in response. “Lord of Light, defend us.”

“Lord of Light, protect us in the darkness.”

“Lord of Light, shine your face upon us.”

“Light your flame among us, R’hllor,” said the red priest. “Show us the truth or falseness of this man. Strike him down if he is guilty, and give strength to his sword if he is true. Lord of Light, give us wisdom.”

“For the night is dark,” the others chanted, Harwin and Anguy loud as all the rest, “and full of terrors.”

“This cave is dark too,” said the Hound, “but I’m the terror here. I hope your god’s a sweet one, Dondarrion. You’re going to meet him shortly.”

Unsmiling, Lord Beric laid the edge of his longsword against the palm of his left hand, and drew it slowly down. Blood ran dark from the gash he made, and washed over the steel.

And then the sword took fire.
—A Storm of Swords, Chapter 34, Arya VI

The show's interpretation of that scene is quite faithful. In "Kissed by Fire" (Game of Thrones, S03E05), the scene leading up to the fight between Sandor Clegane and Beric Dondarrion is quite similar to the books: 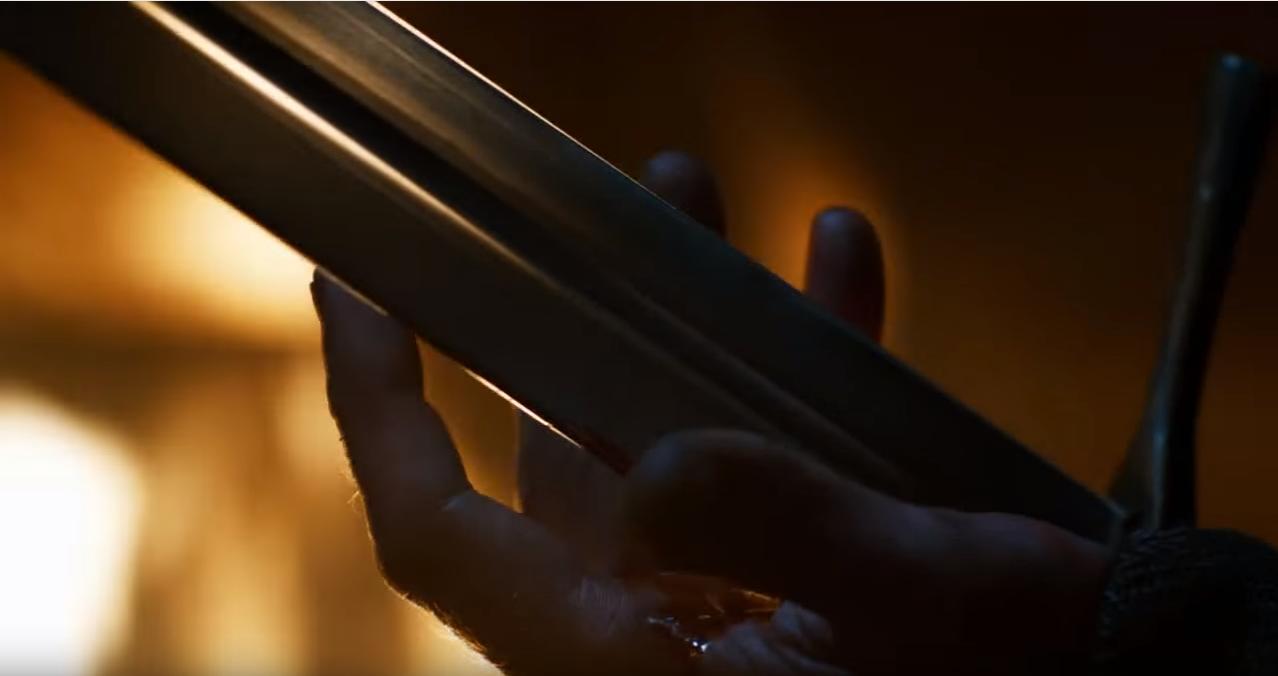 In "Beyond the Wall" (S07E06), we see both Thoros of Myr and Beric Dondarrion light their swords with no prompt (no prayer, no blood magic, no application of wildfire, no ignition) or preparation that is consistent with what we've been told in the books or shown in the series: it just makes no sense. They seem to be able to telepathically activate it whenever they're in peril.

Even if, as others have claimed, they did coat their swords in wildfire, from the show we know that wildfire requires ignition (the candle under the Sept of Baelor in S06, and Bron's fire arrow in S02) and that it lights green - neither of these stipulations are met in the episode. You'd also have to concede that Beric randomly changed methods, and somehow explain how the wildfire turned off on its own, then turned back on (on its own (no ignition)) in a later scene, which takes place the next day.

“Is it wildfire?” Arya asked Gendry.

Because it is inconsistent with what we've been told in the books or shown in the series, it's an actual mystery, in-universe, as to how it works, and therefore the only thing one can do to try to fill the plot hole (how come he doesn't telepathically activate the flame again to keep them warm) is invent reasons with pure speculation. I can come up with a few relating to stamina/mana, using some basis in other fantasy properties, or that Beric was afraid of ruining his sword since the fire is known to ruin good steel (seems like a harsh outlook on his friends' lives, especially considering a dead Thoros wasn't going to use his sword, plus they had dragonglass weapons), but it's too weak and based on flimsy speculation.

The true answer is that this was a flaw in the writing, a logical error, which isn't all too rare in Season 7.

If I have a cigarette lighter, $1 at any convenience store, why don't I use it as a flame-thrower to kill all my enemies, wherever I see them?

Because the amount of flame needed to produce the tiny flame to ignite a small object is not the same as required to do other, heftier tasks, and the ability of the lighter to deliver flame is not unlimited.

We don't see flames flying from his sword, mowing down rows of the undead like dragonfire, so clearly he can't just conjure up unlimited flames at will. The magical quality of his fire clearly has an effect on the wights, but it is more the magical opposition of magic fire vs magic ice, more than the raw latent heat content of the flames, themselves.

Notice he didn't try to burn Thoros with just the fire, just used it as an ignition for the liquor soaked clothes, when they went to burn him. The amount of heat/energy needed to put flames along the surface of a thin piece of metal is not especially significant. Indeed, it can't be, otherwise, since metal is a tremendous conductor of heat (think of how you can put your hand into a heated oven, and feel the heat of it, but if you brush against the metal walls of the oven, or touch a metal sheet or pot within, you get burned, even though the temperature of the air and the metal is the same. The metal, being dense, has the ability to hold more heat), his hands would blister and burn in a matter of moments from holding his blade, if the fires contained significant heat.

Not only is there nothing to suggest that the fire and heat is somehow unlimited, there is significant information that we see that suggests the opposite - it is minimal and severely limited.

Well, this comes partially from the books although it is somewhat changed in the show. Thoros sets his sword on fire for duels and battles with the help of pyromancer from King's Landing. Somehow they apply wildfire on the surface of the blade enoguh for few minutes of show. However blade is ruined afterwards and can't last another battle.

In the show we see they do it without wildfire, but still we can not assume that steel will burn forever without taking damage, nor that flames have fuel to burn forever. Beric is demonstrating power of his Lord but we don't know if his sword is something magical, like Lightbringer from the legends. It is still probably a trick Thoros and Beric pull of on regular steel sword.

Still, they should have sit around the burning Thoros regardless of being morbid. And they probably had some logs carried with those sledges, as we saw fire they made as distraction when they attacked White Walker. I guess they didn't care to drag sledges with them when running away from wight horde.

This answer is speculation based on what we see about how the fire swords work.

We know from previous episodes that Beric slices his hand and says a prayer to the Lord to light the sword. This is explained in more detail in this answer.

In season 7 episode 6 we see both Thoros and Beric swipe their hands over the base of the blade when lighting the sword. Though the hands are gloved they could have cut through it though this is never shown. If they don't cut through the glove I'd presume that this is just now symbolic i.e. if they've learnt that the action is not needed to actually light it and are saying prayers in their mind. Though their is obviously no detail for this.

In the GIF in the question we can see none of the above and so I believe it to be an actor error rather than a plot hole.

As to the actual question, it could also be argued that he could have used his sword as a torch when they could hardly see in the blizzard or at night but didn't. Possible explanations:

Out of all of those the last is the more plausible though it is a very weak argument.

In the end it appears to be a plot hole though any number of reasons can be thought up as to why.

15
Why did Maester Luwin want Bran and Rickon to be taken to the wall in S02E10 of GoT
7
Can Lyanna Mormont ask Jon to return Longclaw to House Mormont?
9
Why are they avoiding showing Arys Oakheart's face?
43
What does the Night King really want?
29
Why worry about the Night King if they have the wall?
9
How long were Jon and company on the island?
20
Is this thing a wight or a White Walker?
10
Why didn't Randyll Tarly avenge the theft of the family sword?