How did the Wights get the chain for doing this?

In Game of Thrones Season 7 Episode 6, after

the dragon was killed/injured by Night King and fell into water,

the wights lifted it out using chains.

From where did they get the chains?

The actual answer is shown onscreen. Across the lake from the Night King's original position, around the bend of the hill, there is an old wooden dock with chains wrapped around it. You can see it in two shots: 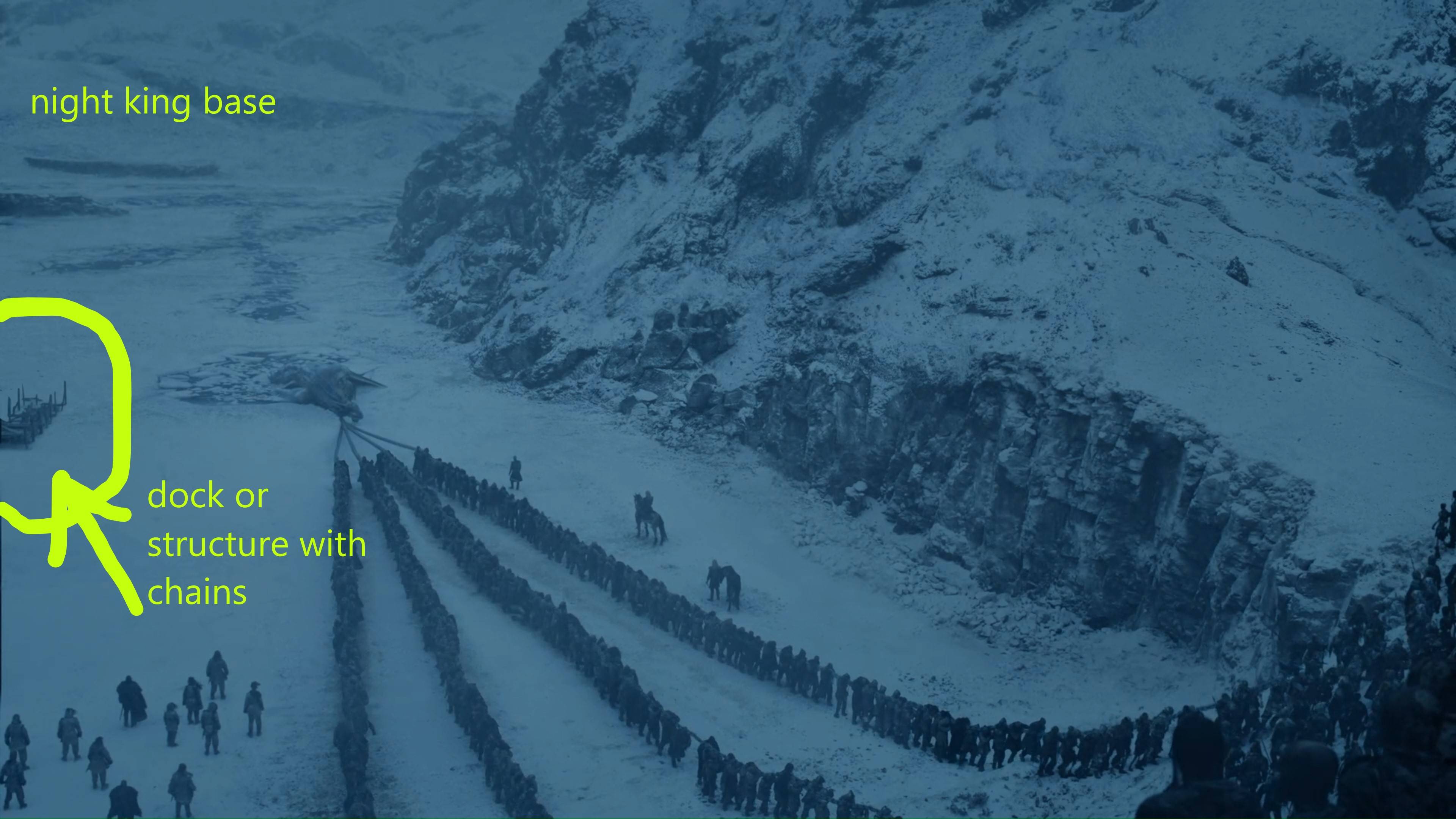 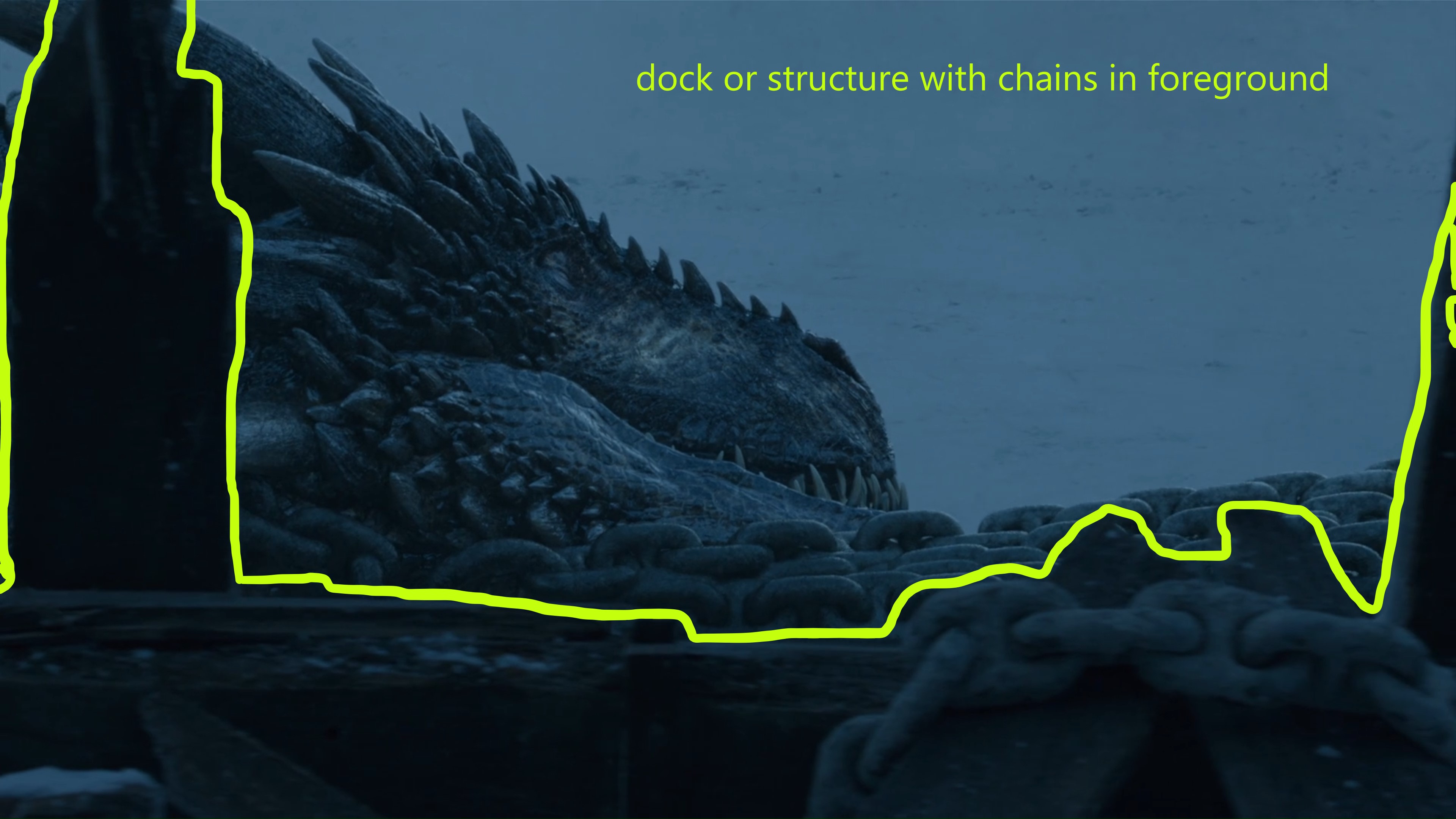 Simply put - they found it in a ditch.

Edit to make this a somewhat more serious answer.

Maesters dispute if the base of the Wall was made of stone, but they generally believe builders of the Watch used sledges to transport ice cut from frozen lakes in the haunted forest. Wiki Source

If I was going to move a giant block of ice across leagues of frozen wasteland, a sturdy chain sounds like something that would come handy. Any number of reasons could leave a chain left behind - wildlings or wights harassing the builders, adverse weather, accidents (frozen lakes are pretty dangerous) or simple negligence. In a snowstorm, a chain like that would be hidden beneath snow within a half hour making it very difficult to locate again.

One possible explanation is those are ice chains.

Even Martin said that Walkers use ice in ways human's don't know. What we see in the show is that thier weapons are very powerful and able to destroy normal steel weapons, with Valyrian steel being the exception. Their weapons are not made of normal steel, but look as if made from ice. Only it has to be some special ice that is very strong and sharp etc. If so, it is not unthinkable that they can produce ice that will not melt or will very slowly melt in cold water. This kind of chain would be lighter in weight but would be stronger than normal steel chain.

Personally, I think ice chain would be obvious in-universe explanation. Anything else would bring us more surprises :)

The Night-King called the show-runners. Hey David/Dan, I’m on a freakin’ glacier in the middle of nowhere in Iceland. I have 1′000′000 wights but none of them is a black-smith. Can you help me out and bring some chains when you come up?

The Night King knew that Jon and his companions were coming. He set a trap to lure Dany up North, so he could capture one of her Dragons to bring down the wall.

In Episode 5 (Eastwatch) we see that the Night King’s greenseeing abilities far surpass Bran’s. This is the relevant passage from the Episode 5 script:

Bran lies with warg-white eyes in his tower room, controlling all the ravens.

The ravens fly through the sky, covering ground, crossing north of the Wall. As in Winged Migration, we cut into their POV: an army of 100,000 dead men blankets the surrounding hills and fields, marching in formation. White Walkers ride dead horses in their midst. They're in no rush. Their pace is slow, steady, inexorable as the grave. The Army of the Dead is finally marching on the living. The Night King knows when he's being watched. He looks up at the ravens and the ravens scatter, as if at a gunshot.

If you then watch episode 6 (Beyond the Wall) and you keep in mind that the Night King is the most powerful greenseer in Westeros, you realize that the Wight Polar Bear attack wasn’t random. It was meant to kill Thoros, the only red priest in Westeros with a proven track-record of bringing back the dead. 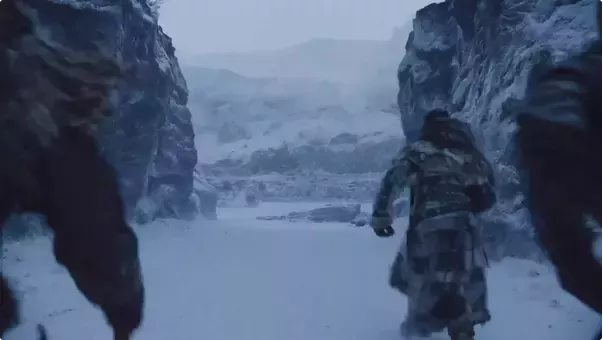 As you can see, the island on the frozen lake is clearly visible from the place where they captured the wight. This led me to believe that the Night King had a plan. It was crucial for the Night King’s plan that Gendry knew they had captured a wight in a good condition and that his companions were safely trapped on an island of a frozen lake. And that he made it back.

The Night King carefully chose this setup in order to increase the likelihood that Dany with her Dragons would intervene. It wasn’t coincidence that he waited hours if not days and only attacked ten minutes before Dany’s arrival. By having Dany land her dragon on the island, he created a diversion which allowed him to either hit Dany on the ground or to down Viserion or Rhaegal.

He targeted Viserion and Rhaegal because if his Ice-Missile misses, nobody would notice and he would get another chance to shoot again. If he shoots at Drogon on the ground and misses, everybody would flee leaving him possibly without a dragon. Remember, the Night King’s goal was to capture a dragon as intact as possible, turn it into an ice-dragon spewing blue fire, so he can burn down the wall. 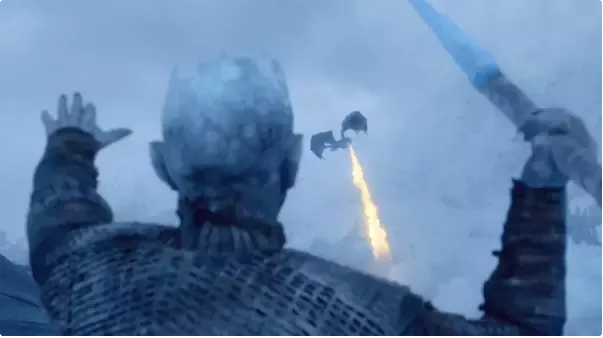 Like Qyburn, the Night King prepared for Dany’s Dragons by building a dragon-killing weapon: An ice-missile. Just look at how far Viserion is in the screenshot above. Unlike the Lannisters, the Night King not only had a weapon, he also used it like a pro. And that means a lot of practice.

And now you’re asking where he got the chains from? Look, if you can prepare an ambush of this magnitude and a dragon-killing missile, and you practice how to use it, wouldn’t it be just basic due diligence that the Night-King’s lieutenants also think about sourcing the chains? Those chains look like anchor chains from (sunken?) ships captured when they overran the Wildling towns like Hardhome. 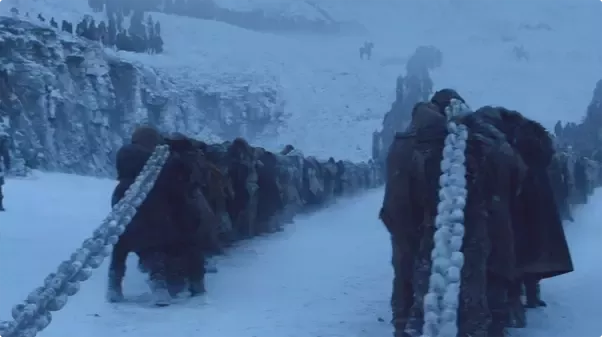 Yes, those chains are big, but these ice-missiles are scary… 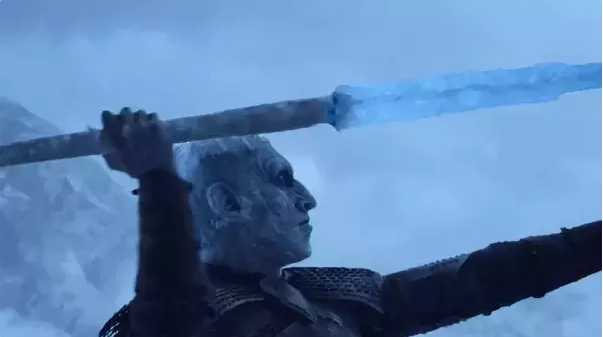 I just can tell you that when I was done watching this episode, I just thought, OMG, they’re really really f***ed.

That said, I wouldn’t call Jon’s botched mission a failure because we learned a lot. First, killing a white walker also kills all the wights it turned. So if Jon kills the Night King, all his wights will vanish with him as well. Second, when they captured the wight, the wight screamed for help in the language of the White Walkers, which means that wights and White Walkers communicate with each other. Third, this mission made Dany firmly commit to Jon’s cause. And only with Dany’s armies, Jon’s Northern alliance stands a chance against the Night King’s army of the Dead.

6
How come the chained dragons don't choke when they grow?
8
How did the two dragons get unchained?
4
How are wights re-animated?
15
Who falls off cliff and is killed by the wights?
19
How did this army get here?
9
Why didn't the Night King resurrect Viserion under water?
3
Why did the wights pile up when they were stabbed by dragonglass?