Why does this happen with Longclaw?

Spoilers ahead for "Beyond the Wall" (Game of Thrones, S07E06)

Toward the end of the episode, "Beyond the Wall" (Game of Thrones, S07E06), we see a close-up shot of Longclaw 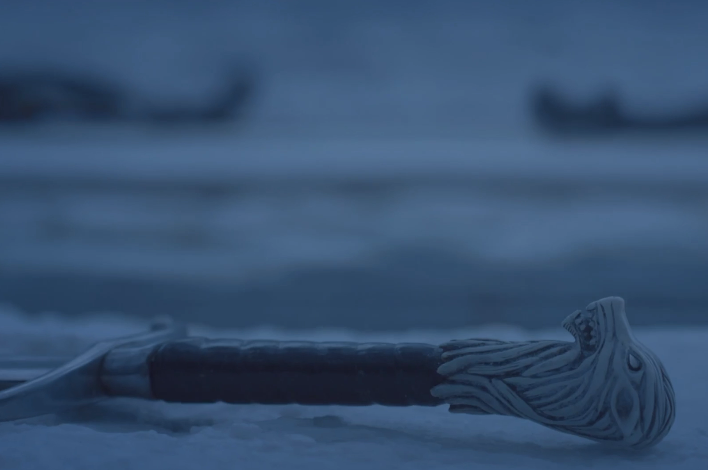 Then, once Jon Snow emerges from the water, Longclaw appears to be opening its eyes 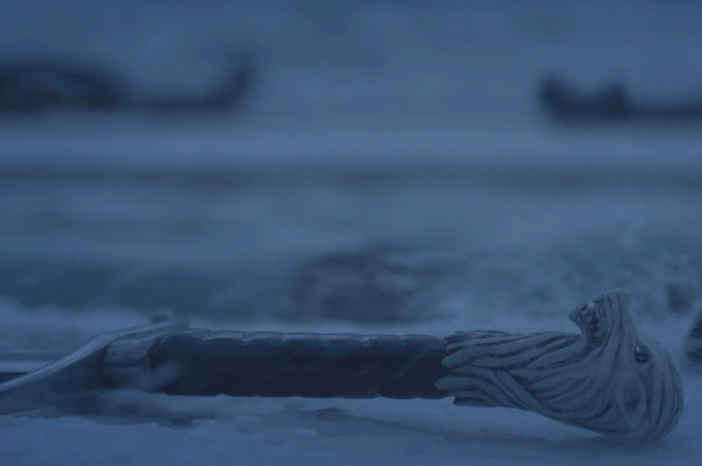 You can get a much better picture of it in this imgur album, which shows the event happening, frame by frame, with comments.

Is this an Easter Egg from the Visual Effects department, or is there an in-universe explanation behind this?

Or was this not planned at all by the production team, and this is merely a coincidental, accidental lighting/water effect, that just happens to be timed with the dramatic tension of Jon Snow possibly being dead, and the relief of him being alive?

This is water falling on the eyes...nothing supernatural

The Director has confirmed...

“I haven't got a clue what they're talking about. Either this sword is magic and it’s doing stuff on its own, or something happened. I’m going to have to go back and watch that moment close up and in slow motion to see what’s going on there. I can say that there was no intention for that to be the case.”

It appears to me that the eyes are probably made of some sort of clear material, and the space between them is hollow. And what we see is John's glove through it. Watch again to see if you see it.

OK, I'm just kidding here, but here is in-universe explanation I just came up with:

Wolf ornament is made of Weirwood. So when Jon was near dead, Bran felt it and connected to Longclaw to see what's going on :D

Apart from that, it's more likely water after seeing shots. It is opened exactly at the moment when water is coming down, so could be one of the first drops hit a bullseye.

After this moment, when Jon tries to get out of the water with the support of Longclaw, we can see blue eyes of longclaw. When he was in the water, eyes were white. So I think it's the moment Longclaw opened it's eyes. Even in the beginning of the episode, when Jon gives it to Jorah, we can clearly see it's blue eyes.

Kinda farfetched but maybe the crystal eyes of Longclaw is imbued with something that can detect life. I was rewatching the episode and noticed that the eyes don't open and close specifically to Jon but it was also "open" when Jorah was touching it. And since he was surrounded by death, the crystals closed?

1
How is the eye of the Longclaw getting opened?

21
Why did Melisandre ask Jon Snow if he's a virgin?
7
Can Lyanna Mormont ask Jon to return Longclaw to House Mormont?
4
If Daenerys was willing to help these people out, why didn't she do it from the beginning?
28
Why did Benjen Stark allow this to happen to him?
71
Why did the Night King attack the furthest target first?
9
How long were Jon and company on the island?
20
Is this thing a wight or a White Walker?
13
Why is the Night King so slow?
24
Why do characters believe Littlefinger to be untrustworthy?