Why didn't Jon Snow use this?

In season 7 of Game of Thrones, Jon Snow spends a considerable amount of time in Dragonstone mining dragonglass.

Dragonglass is known to kill wights and white walkers.

Towards the end of "Eastwatch" (Game of Thrones, S07E05), Jon assembles a team of people to bring back a wight to convince Daenerys and Cersei.

Why don't they use dragonglass? 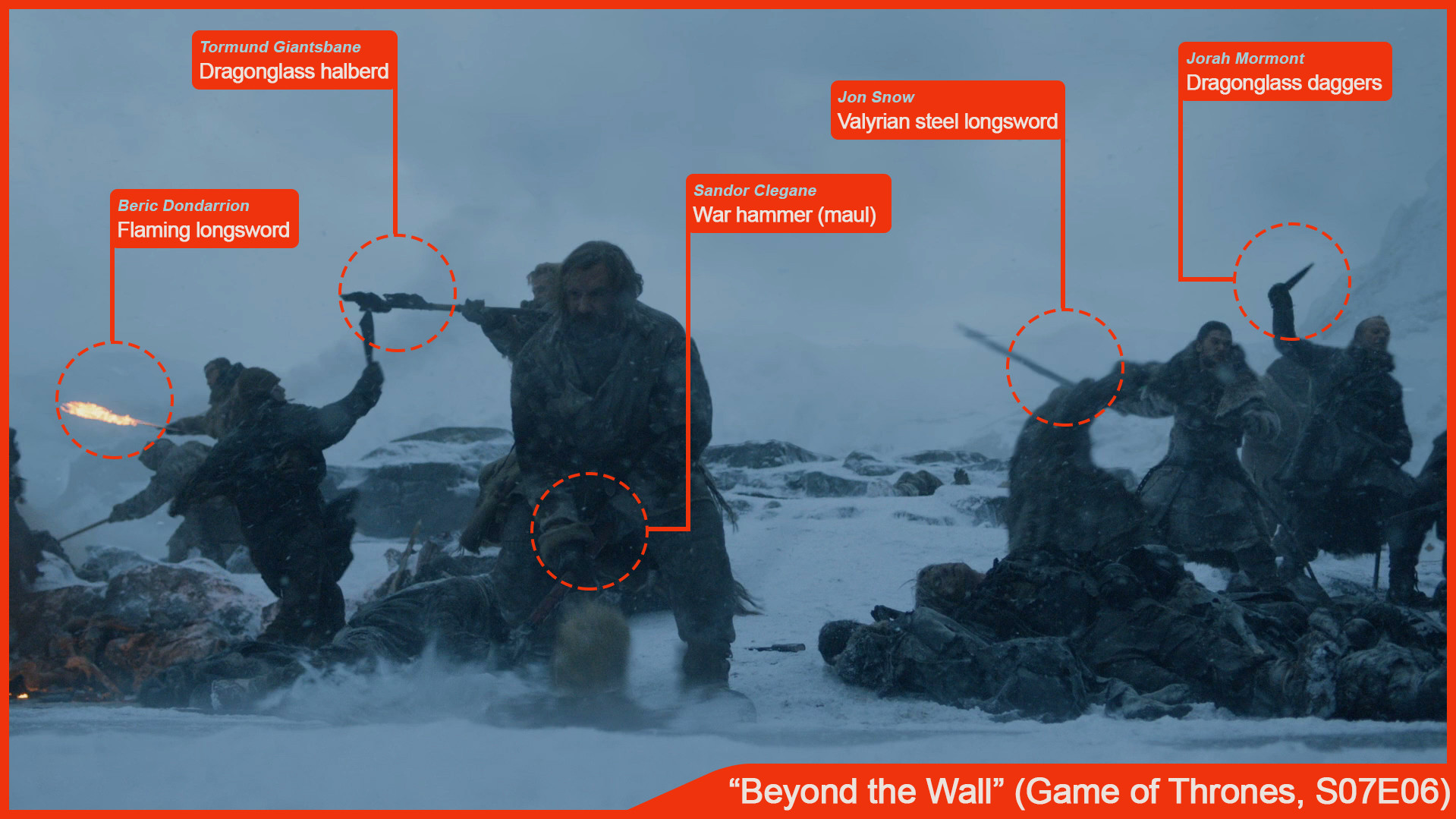 Tormund's dragonglass halberd(more close-ups here) is evidence that they have already made use of the dragonglass they mined at Dragonstone, knapping some of it into weapons that they could use for this mission (they brought enough for Jorah and some of the extra, unnamed men, who seem to be using dragonglass spears, and Sandor ends up pulling out two dragonglass knives/daggers, once he gets fed up with whacking them in futility with the maul).

Notice the pile of dead wights (aren't rising anymore) stacking around all our heroes, all equipped with suitable weaponry, except Sandor who is stuck with Gendry's war hammer (until later in the scene when he pulls out two dragonglass knives), so he has to use percussive force to poke holes into the ice - for a man of his stature, it is arguably as effective as the others' weapons in a situation like this, where interrupting the flow of wights charging at your group is important.

I imagine dragonglass is being mined and shipped to Winterfell and throughout the North. Because maybe it can be mined, but to make weapons out of it... that takes lot of blacksmiths and the knowledge to do so. And knowledge of smithing dragonglass into weapons is not common.

That's why Jon said in first episode of season 7 that every maester in the North must search through books for every mention of dragonglass.

So I imagine that is not going so easy, although it is great relief to know there is a lot of dragonglass on Dragonstone at least. Making weapons is whole another problem.

Also, do we know that dragonglass kills wights? It kills White Walkers, which is amazing already. But for wights I think only fire helps. And smashing their bones to ashes.

Don't they? There's a scene in S07E05 around the 45 minute mark Jorah Mormont is seen putting a big wooden crate into the boat right after he puts in his longsword. It clinks when it's moved. Around the 54 minute mark, once they arrive at Eastwatch, Davos is seen taking this same crate out of the boat. The camera then pans out and two of the men are carrying this crate to the Wall. I took that to mean the crate contained obsidian (=dragonglass) weapons - those they've managed to create so far, at least.

Nobody mentions it or anything, but what's the point of that crate otherwise, and why would two men need to be carrying it?

Jorah kills the undead bear with a single stab of a dagger around the 24th minute mark. Why would he use a dagger when he has a perfectly good longsword within reach? It's safer to use a longsword, after all, you can stay further away from the mad bear, which is also on fire. Just before that we see the Hound ready to battle the bear with a similar dagger in his hand. Again, why a dagger? Because it's obsidian, while their swords are just everyday steel. At the 28th minute mark we actually get to see the dagger Mormont is wearing and it looks like black glass, so again, dragonglass.At the 30th minute mark he very obviously uses this same dagger to battle undead. At the 43rd minute mark, Mormont takes out another dragonglass dagger.

So it seems they do have some obsidian weapons with them, though not enough for everyone. They probably set out before they could mine or make any more?

As I commented in the post, even if they took it. I can't see it being that useful in the fight they had.

How much would they have to take to face that army of Wights? They probably had a piece with them for the Walkers, which they didn't actually face but the one that Jon killed.

As @NyaNya said in his answer, they actually have some Dragonglass daggers.

42
How was Jon Snow able to kill the White Walker in S05E08?
9
Requirements to join the Wights (The Army of the Dead)
19
How many White Walkers are there?
3
If Daenerys was willing to help these people out, why didn't she do it from the beginning?
10
Why didn't the Night King throw the spear at Jon Snow and team?
13
Will fire destroy white walkers or just the wights?
0
Why is only dragonglass/fire able to destroy White Walkers?
9
Why did Jon and the Wildlings travel on the north side of the wall when they arrived back at Castle Black from Hardhome