Who are Sheldon's references of Crunch and Kangaroo?

In this clip of The Big Bang Theory, before sacrificing himself, Sheldon says

Following in the footsteps of Kirk, Crunch and Kangaroo.

I know Captain Kirk died and later sacrificed himself in the Star Trek: Generations movie.

Who are the other two characters?

He just means he's appointing himself a "Captain" and leading...

Other than that the references have nothing in common.

Captain Crunch is a character on (or the name of) a US breakfast cereal. 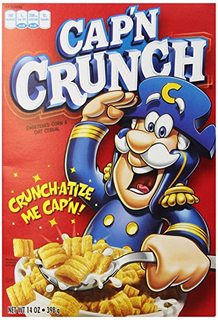 Captain Kangaroo is an American children's television series that aired weekday mornings on the American television network CBS for nearly 30 years, from October 3, 1955, until December 8, 1984.

There was no actual kangaroo in the show..

(the name "kangaroo" came from the big pockets in his coat)

Not the answer you're looking for? Browse other questions tagged character dialogue reference star-trek the-big-bang-theory .

62
Is Amy right about Indiana Jones being irrelevant to the outcome?
18
Is the mystery of Howard's father's letter solved?
15
Was Kirk's retirement from the Star Trek franchise already decided in The Undiscovered Country?
4
Why does Sheldon not stop Leonard from sitting in his spot on the couch?
11
How did Kirk sell his house?
6
What's the exact problem with Raj?
2
Does Raj Koothrappali ever get married?
2
Who helped Sheldon in depositing all his used/old stuff in his storage unit?