Were the pamphlets shown in the opening scene really published/circulated?

In the opening scene of Dunkirk, while walking through the city the soldiers came across lot of pamphlets/fliers. It had a picture depicting the perimeter which Germans had formed in the sea to surround/trap the entire English/French armies. It had written on it - "We surround you".

Were such fliers/pamphlets really distributed by Germans across the city? Or it was just a way of exposition? (Nolan has done such things in his past movies. Remember the wormhole explanation from the movie Interstellar?)

Leaflets demanding that the British surrender were dropped from the air, but not of the design used in the film. 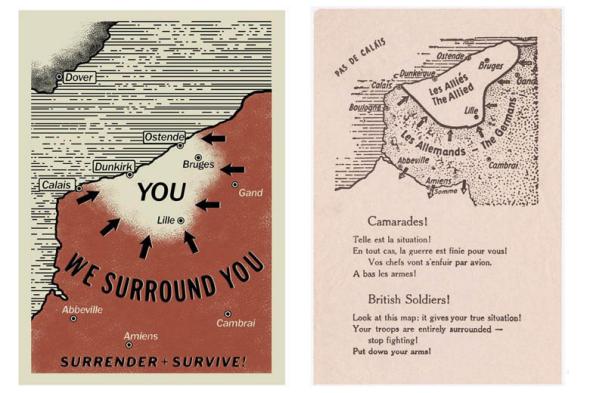 Left: The pamphlet in Dunkirk. Right: The real-life pamphlet that inspired it.

They were real, but the genuine ones weren’t in living technicolor. Quickly churned out by intelligence officers behind the lines on commandeered newspaper presses, such pamphlets encouraging a surrounded enemy to surrender were used by all sides throughout the war.

Not the answer you're looking for? Browse other questions tagged realism dunkirk .

10
How realistic is the brainwashing shown during Season 3 and 4?
33
In the movies - Do wire transfers really work?
1
Do the ancient Japanese healing methods really work?
6
Does the music festival really exist?
2
Is result shown from the explosion realistic?
14
Were there really bells attached to buried bodies?
60
Was a supercomputer really needed in "The Martian"?
1
Why didn't the USS Nathan James use air defense with SM-2 and ESSM in the opening scene?
6
What war was shown at the beginning of Outbreak?
3
Do astronauts really have to pay for pillows and blankets as shown in Ad Astra?